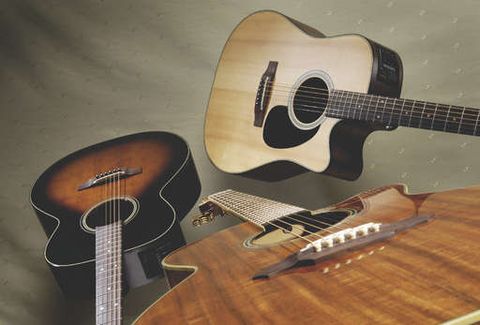 It's a good-quality workaday all-rounder.

Much of Takamine's focus this year has centred on the company's budget models, many of which are now being sourced from China rather than Korea.

However, the brand's core business - in prestige terms if not quantity - continues to be its Japanese-made instruments, now being produced in a recently opened state-of-the-art factory.

This electro is an example of this new facility's workmanship and a debut to boot.

Strictly speaking it's slightly inaccurate to describe this cutaway dreadnought as new, since the EF340SC has been a popular model for some years.

However, this one is a limited-run incarnation, the added 'O' suffix signifying ovangkol back and sides instead of the regular version's mahogany. Just under 100 pieces are scheduled for the UK.

Ovangkol, an African tonewood, is a popular substitute for rosewood.

Though invariably stripier in its graining, it can often resemble rosewood in colour (as it does here), and it attracts tonal comparison too, although some luthiers consider it contributes a more mahogany-like sound.

The EF340SCO's back and sides are laminated, which in one sense is a downgrade from the SC since that features a solid back.

Still, the timber is visually well chosen, and the laminations are genuine ovangkol, rather than some anonymous wood being used for the inner plies.

The guitar's solid spruce top is a little 'dirty' in some of its complexion, but it's close grained with a reassuring smattering of cross-silking.

Cosmetic shortcomings were rare from Takamine's old factory, and the presentation here is nigh on faultless too.

The all-over satin finish feels especially smooth to the touch, and the multi-ply top binding and soundhole rings are very precisely lined.

In fact, the only conceivable (very subjective) reservation is that the adornments are rather staid. But this is designed as a workhorse instrument and not one to be dripping in abalone.

Aside from very minor variations in low-position depth, the 644mm-scale mahogany necks on all three guitars are fashioned to a similar profile.

This means Takamine's usual, quite slender span and a tightish string spacing at the bridge, and a pretty-much evenly rounded grip - although this dreadnought has a little more wood along the shouldering than the other two.

A depth of 24.5mm up near the start of the heel turn is fairly full, but it doesn't feel too chunky thanks to the modest width.

It's good to find a second strap button at the heel too, which all review models came fitted with.

Something else our trio share in common is the powering combination of Takamine's palathetic under-saddle pickup and CT4BII preamp.

One of the company's interchangeable slot-in units, the CT4BII provides slider-based volume and three-band EQ, and includes a versatile auto-chromatic tuner that can be calibrated between 438Hz and 445Hz to allow for accompanying, say, dodgy acoustic pianos or other slightly 'off-key' instruments.

When activated the tuner usefully mutes the output, it can be used whether or not the guitar is plugged in, and is generally very easy to use and accurate.

The preamp's only drawback - applicable to all other slot-in Takamine systems too - is that its shoulder mounting gives an annoyingly oblique view of the controls.

We always raise this point, but probably in vain, since the company isn't likely to completely redesign or relocate a housing arrangement that is so well established. Still, you never know.

As dreadnoughts go, the EF340SCO isn't the ultimate bruiser, but it's not meek either.

The tone is pleasantly and quite neutrally poised between brightness and warmth, and though a little more low-end gusto might be desirable in purely acoustic terms, that could run the risk of skewing the balance electro-wise.

Indeed, when powered up the CT4BII supplies plenty of low-end range as things stand, even though each of the EQ bands offers only a modest +/-5dB of boost and cut.

There's an advantage to this: it's pretty much impossible to set up a duff sound, because you can't take things to daft extremes.

So what we find is a mid-range that's never going to sound too meagre or nastily honky, and a top end that can either be relatively muted or sparkling but never too dull or too brittle. It's an arrangement that works well.

As far as perceived value is concerned, the one disadvantage Takamine has with this debut is that it might seem expensive compared to other electros that offer all-solid construction for less money.

The reality is that for the important criteria of build, playing enjoyment and sound, the EF340SCO comfortably justifies its price point.