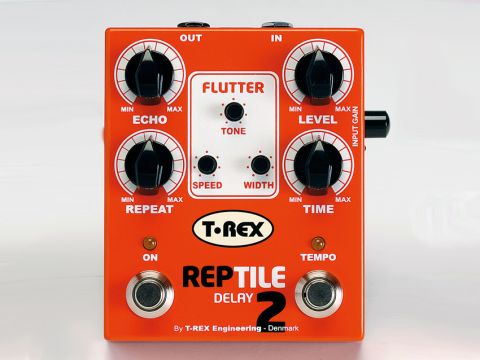 A superb delay for gigging or recording.

From short echoes to vast, crystal clean ping-pongs, guitarists love delay. The question is, which one?

T-Rex's re-worked Reptile 2 wears its heart on its sleeve. It's an analogue tape echo simulator (that doesn't use digital modelling), which will be softly repeating music to the ears of many - but it's not just for vintage buffs.

The main points here are tap tempo - unusual on a tape-style emulator - and up to one second of delay time (vintage-type units often have less than half that).

Atop the orange metal casing are seven knobs and two switches, the four bigger rotaries deal with delay time, number of repeats and the effected sound mix knob (echo), plus you also get a global level pot that enables you to either boost or cut the pedal's output level; up to a +3dB increase.

In addition, there's a recessed push/push input level control on the right hand side, with a red clip LED enabling you to optimise the input level for a guitar signal or an amp's effects loop send - some loops can overpower a pedal input.

The three mini-pots deal with traditional tape echo fun; while the foibles of real tape might have been a pain back in the day, they've since become highly prized sounds. Thus speed and width control modulation - termed here tape 'flutter' - and you also get a tone knob to darken the repeats.

The biggest functional improvement over the first Reptile is the tap tempo switch. Borrowed from the Replica - among the best digital delay pedals available - it enables you to tap in delay times on the fly so your repeats are always on the pulse with your music.

The ability to run on anything between 9-12.6V DC will be a relief to many, as you can use a standard power supply as long as it will deliver 120mA. But don't bother with a 9V battery - while it can take one, T-Rex says it's for emergencies only: expect an hour at most.

The shortest delay is a barely detectable 10ms, meaning you can go from doubling-style repeats through to the full 1,000ms (one second).

With the tone pot up full, the sound is open and clean, not in the glassy digital vein of a BOSS DD-6, but not as dark as MXR's (analogue) Carbon Copy either.

Engaging the speed and width controls is similar to a chorus sound; from a light modulation to a fast wobble, those decaying repeats with pitch vagaries ooze character.

Maximum speed and width settings return the obligatory comedy warble, not to mention some '60s-style sci-fi sounds. With the repeats on max and time on minimum you can get Dalek-in-the-bathtub silliness at one end, and a passable, albeit weird, rotary speaker-type simulation at the other.

The repeat knob can get you into self-oscillation for wilder moments, although don't expect Memory Man-style functionality; the extent of the modulation isn't there and manipulating the time knob has a less musical response than on a fully analogue delay.

Lest we get carried away - what the Reptile 2 does best are those delays you know in your bones. Vintage slapbacks, Hank-style rhythmics, and Gilmour ambience: classic delay for classic guitar tones.

With the added tap tempo control and tone pot, the Reptile 2 is a more versatile and stage-friendly update on its predecessor. It doesn't sound exactly like Eric Johnson's Echoplex or Hank's Meazzi, but nor is it a foot wide or prohibitively expensive.

Unlike the higher-spec Replica, the Reptile 2 really shouldn't confuse anybody with its controls, but it's still very versatile and packed with classic tones.

Top it off with superb T-Rex build quality and true bypass switching, and this is pitched perfectly as a superb, pro-standard, vintage-voiced delay choice.