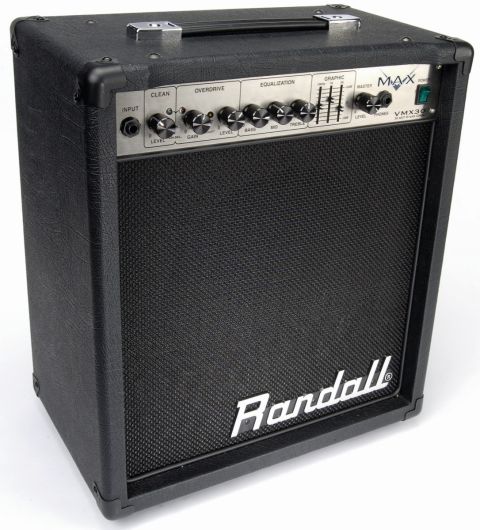 You can find 'em cheaper and with more buttons, but if you want an amp with tone in spades, the VMX30 is the daddy.

The Randall VMX30 is not your average practice amp.

For one thing, it's made by one of the giants of the US amp industry. For another, it's endorsed by a 'proper' celebrity in the form of balding Anthrax riffmeister Scott Ian.

But perhaps the defining difference between this 30-watt bad boy and its competition is the sense of aspiration. While the majority of entry-level combos are duller than Steve Davis on valium, this one actually managed to get us excited.

You can't expect miracles for under £200. Neither can you expect the same bells and whistles that start appearing further up the Randall product line. What you can expect, however, is a proper investment.

If the VMX30 is going to compete in this price bracket, we're looking for more of the glorious distortion that has made Randall legendary in thrash-metal circles, along with a bulletproof level of build and features that won't tie us to the bedroom. Yep, we're fussy like that...

Amp buyers tend to fall into two categories: there's those who insist on a smorgasbord of buttons to play with, and those who aren't bothered so long as there's a volume dial.

While a cursory skim across the VMX30's spec list might suggest this model is somewhat lacking in the trimmings department - you won't find any built-in effects, for example, or even a footswitch - we'd argue that it has everything you actually need.

As you might expect, the VMX30 is a strictly solid-state affair and no, that doesn't mean it's crap. On the contrary, some of Randall's most desirable models are solid-state too, and in this case the absence of valves is the main reason why the VMX30 is so affordable, light and practical.

You're looking at £499 for the cheapest Randall valve combo (the RG50TC), and no-one's dad is that generous.

In terms of power, you've got a 30-watt output that blasts through a 12-inch Rocket 50 loudspeaker. Having cranked the volume up halfway on a Sunday morning, we can offer reassurance that this measly-sounding figure is actually pretty offensive and should certainly qualify the VMX30 as a viable option for jam sessions and small gigs.

We'd also draw your attention to the separate channels offered by the VMX30. No prizes for guessing their respective uses. That's right, the Clean channel caters for those rare moments in the set when you trade bulldozer riffs for lush open chords, while the Overdrive channel is all about the filth.

Given Randall's reputation for distortion, you'll probably spend more time on the dirty side, not least because it offers a Gain Boost to push your tone over the edge. You can set volume levels for each channel and move between them with a jab of the Channel Switch button, but we were a little disappointed there isn't a dedicated EQ for each.

Never mind, a swanky graphic equaliser for shaping the signal frequencies helps soften the blow. Spin the little bugger round, meanwhile, and you'll find an effects loop, a socket for connecting up a CD player and another for your footswitches.

This isn't some la-di-da boutique amp. It doesn't need wrapping in cotton wool and transporting in a velvet-lined gigbag. On the contrary, there's something about the VMX30's hard-as-nails cabinet that practically begs you to throw it down the stairs.

This is the Sherman tank of combo amps. With chunky dials, metal corner protectors and a tough vinyl carry-handle, we reckon the only thing that could stop this brute is a powercut.

Let's not waste time pretending to be interested in the clean channel. It's very nice and all that, but we came here for filth and so did you. There's something unique about Randall distortion, and was pleased to find it has filtered down from the more expensive models into the VMX30.

Broadly speaking, a brutal modern overdrive is the name of this amp's game, but judicious use of the excellent graphic EQ means you can coax out anything from a grunt to a sneer.

Even using a singlecoil guitar you'll quickly find yourself in Dimebag territory as you ease up the gain, and there's a professional edge to the tone that deserves to be heard outside the bedroom.

As grizzled old gearheads, it's rare for us to get excited about amps in this price bracket, but we don't mind admitting that this Randall's glorious distortion made us hot and sweaty. It's a practice amp made perfect.