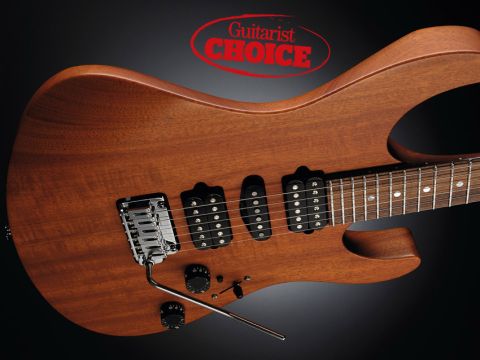 It's not cheap and not that pretty, but is one of the most fabulously versatile and musical machines we're yet to drive. And it just might help us play like Guthrie...

Guthrie spent years playing set-neck mahogany guitars - notably a Gibson SG Special and a PRS he used until around five years ago. But once he joined Suhr's ranks it seemed logical to combine talents to come up with an instrument (or two) to which he could put his name.

You may be more familiar with a flamed maple, bolt-on neck Suhr that's usually seen strapped high around Guthrie's neck. That is artist model number one, while ours is the second version, a plainer instrument that harks back to those mahogany guitars of yore.

"I've been using the Plain Jane version almost exclusively since January," Govan tells us. "The pretty maple one is dormant in the Dizzee studio, awaiting a summer of festival activity. To my mind this one's an 'anti-superstrat', in the sense that it starts with an SG-esque template then adds the thinner tones, rather than starting with a Strat and adding fatness."

Made from Honduran mahogany (save for a pau ferro fingerboard), the Govan SN boasts a 'long tenon' neck joint that adds rigidity and transfers tone to the body. Guthrie also reckons the set neck model resonates differently.

"It's not better or worse than the bolt-on," he adds, "just different; the string responds slightly differently when you hit it, and that subtly affects the way you play. Mahogany has a lovely 'honk' in the midrange and the construction feels like home."

Finished in a satin lacquer so smooth it would get the thumbs-up from Johnson And Johnson, the SN's body is comfort contoured with a deep rear cutaway 'scoop' to cope with its 24-fret neck. The neck-to- body join is pure art: close your eyes and one simply becomes the other in the most seamless transition we've felt.

"I've never particularly liked locking systems," Govan confesses. "Floyds are great for dive bombs, spaceship noises and wolf whistles, but not for playing Apache - and what I do dwells somewhere between those extremes. Also, having the strings clamped at the nut means you can't bend behind it, or tune the bottom string down to A or B."

Playing the GG is a bit like being handed the keys to Jensen Button's McLaren - how can those such as us possibly do what the machine's designers intended it to? Thankfully the Suhr's benign nature, delightful elliptical neck and silk-smooth finish mean that the 24 jumbo stainless steel frets and almost flat 'board give back whatever you put in.

Due to Guthrie's love of compound bends and pedal steel-like effects, he has the optional Tremol-No system fitted in the back of his guitars. This device simply locks the vibrato using two small hex screws, effectively changing it from vibrato model to hardtail.

It was with the electrics that Suhr strived to fulfil what Guthrie describes as his "entirely unreasonable" requirements: "I wanted everything from passable George Benson to a convincing funky clean tone, a bit of country twang and a gnarly overdriven tone, so I could fly to any gig confident that one guitar would be able to cope with every situation."

Loaded with Suhr pickups - SSV neck humbucker, FL single-coil and SSH+ doublecoil at the bridge - the Govan's output isn't overly high. Through our Matchless Lightning 15 test amp the response between pickups is pleasantly even.

"My only addition," says Guthrie, "is that you can split the neck 'bucker by pulling up the tone pot."

The humbucking tones are strident, with strong mids and no fluffy bottom-end - either clean or with a Fulltone OCD pedal kicked in. Mess around with the spankier tones and faux Telecasters, Strats and even Gretsches emerge. One could meet any session producer's requirements by simply flicking switches, turning knobs and pulling pots - and that's without the guitar's sonic 'secret weapon'.

"I had the idea for the blower switch while playing live with Asia," explains Guthrie of this little button, which in similar form has graced many modern superstrat guitars, not least Tom Anderson's.

"Many of the songs required abrupt transitions between filthy and shimmering clean. The switch bypasses everything. You can crank the amp up, back the guitar's volume down and switch to one of the single-coil settings for a nice clean sound. For instant filth, push the button to get the bridge humbucker screaming at maximum power; to go clean again, just push the button and the guitar 'remembers' the previous pickups and settings."

What's more, despite this seemingly daunting display of sonic delights, the Govan is simplicity itself: it's logical and intuitive and never leaves you stuck on the wrong tone at the wrong time. You can see why our chameleon-like hero delights in what it has to offer.

A signature guitar can be a mess of ideas that relate too specifically to one player's style, but Govan's innate logic makes his signature Suhr an instrument with which almost any guitarist could bond.

If your idea of 'boutique' entails more 'bling', then the GG bolt-on boasts a quilted maple top and glossy finish. Other than its mahogany tone there's another reason for Guthrie's 'Plain Jane' version.

"A guitar will inevitably sustain injuries," he reasons. "I remember how horrible it felt when my first 'pretty' guitar got its first chip."

Well this spartan machine offers a most fulfilling playing experience. It also boasts a musical range of tones and an operating system so logical as to pose the question: why aren't all guitars this versatile?

Build is beyond question, and if you wonder how well the guitar plays, spend a few minutes trawling YouTube for Guthrie Govan and prepare to forget you ever asked.

When pressed for an unbiased summary Guthrie tells us: "It shouldn't really be possible for one guitar to do all of this believably, so the tactic was to get a great humbucking rock tone, then see what we could do to get the other sounds.

"I can vouch for production models being the same as mine too, as I've done clinic tours abroad where the GG I used had a different serial number each night, and I never spotted any inconsistencies."

He would say that, but if you don't believe him, believe us - this deceptively simple instrument plays like a dream and hides a ton of great sounds behind its simple façade.