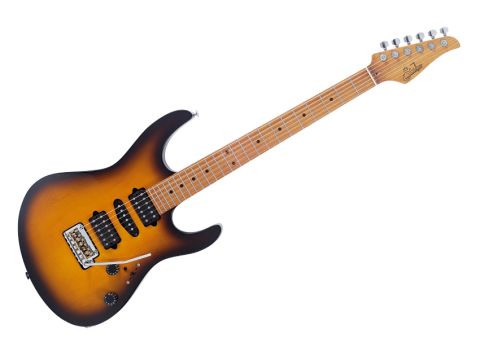 A top-class, modern guitar that does everything exceptionally well.

As one of Suhr's highest profile endorsees, Guthrie Govan has toured the world not only playing his music, but also demoing Suhr instruments at shows and clinics.

Guthrie noticed two things during these excursions: that his mahogany Set-Neck model tended to need adjustment when switching between different climes; and when he played clinics it was often the shops' nitro-cellulose guitars he favoured.

"One of the fun things about Suhr clinics is that I get to try out a selection each night," he told us. "The guitars are all mighty fine, and their consistency is beyond question, but I found I had a soft spot for ones that had bent steel saddles and a nitro lacquer finish."

"John believes that the tonal benefits of nitro can be replicated using a more modern coating, if you can make it thin enough," he says. "Maybe it's psychological, but I'm pretty sure I can hear a subtle difference, acoustically."

Unlike previous GG models, which have been either mahogany and maple (Signature) or all-mahogany (Set-Neck), the Antique Modern features one of Suhr's favourite timber combinations: basswood with a plain maple cap. The guitar's secret weapon, however, is something new to us: a 'roasted maple' neck.

So, what's the deal with this stuff? "Roasted maple necks are cut from blanks that are 'baked' in high-tech oxygen-free ovens at a temperature of 250 degrees Fahrenheit," Suhr's website informs us.

"This process removes moisture and all kinds of other organic 'impurities' that affect the stability of the wood, making it more rigid while adding a deep amber colour for a natural vintage look." Suhr also states that the sound is tighter and punchier, while retaining maple's natural mid-range warmth.

Guthrie says this new neck stability has been a lifesaver when travelling. "It's certainly played a big part," he confirms. "For instance, my last gig was in Iceland and the next four will be in South Africa, so my guitars experience a wide range of meteorological challenges.

"Maple is more stable than mahogany anyhow, but when you subject it to the roasting process it becomes practically impervious to climatic changes. I've been playing mine since January, and I haven't had to tweak the truss rod once."

With the exception of those bent steel saddles, hardware and pickups remain as on Govan's other signature Suhrs. So, we get 22 stainless steel jumbo frets, a Gotoh F10TS-FE1 bridge, Tremol-No string-bending stability system and Gotoh locking tuners.

On the electrics front it's a Suhr SSH humbucker at the bridge, FL single-coil in the middle and SSV humbucker at the neck; with volume, a push-pull tone pot that splits the neck pickup, a five-way switch that offers full and split humbucking tones.

A 'blower' switch again sends the bridge humbucker's full output to the jack but 'remembers' its previous setting. All in all, it's one of the most comprehensive and usable set-ups we've seen on any axe.

While we love the AM's light but expertly aged nitro lacquer we were curious as to the reasoning behind it. "I just thought it would be cool to combine modern features and playability with the vibe of a vintage instrument," says Guthrie.

"It's funny though: while it's a relatively guilt-free transition from SRV to Rory Gallagher levels of cosmetic disrepair, a sickening feeling always accompanies that first 'ding' in any brand-new guitar. So the light ageing alleviates that problem by starting the process for you."

And to the thorny subject of playability! How does a simple blues guitarist, such as this reviewer, assess the playability of a guitar that Guthrie's recordings plainly demonstrate can do things he could never hope to accomplish?

Clearly, anything that any six-string could do - in Guthrie's case million-notes-a-second licks, unfathomable string bends and every kind of physical abuse - it shrugs off with ease. Suffice it to say, it plays superbly in every sense - the satin smooth neck feeling gorgeous and the stainless steel frets imparting fantastic precision.

Basswood has long been lauded for its tonal transparency - it exerts very little colour on the guitar's sound but enables the fingers, pickups and controls to get on with business. Guthrie's view is that overall it's more consistent.

"Whereas mahogany has that distinct mid-range bark, this combination seems to bring out every frequency equally," he opines. "I'm not convinced that the maple cap makes a huge difference, but the neck really adds life in the top end.

"Harmonics pop out, sustained chords ring for days and the clean tone is more sparkly when running through an overdriven amp with the guitar's volume pot rolled down."

Playing the Antique Modern through a Two-Rock Jet highlights everything Govan says, and to be honest it's hard to find anything to add. The guitar's usability is still stunning; especially when in an instant the blower switch can take you from a clean Stratty tone to full-throttle bridge humbucker - and back again!

The summary of our recent Govan Set-Neck review began: "A signature guitar can be a hotch-potch of ideas that relate too specifically to one player's style for you or me. But Guthrie's innate logic makes his signature Suhr an instrument with which almost any guitarist could bond."

Those words also apply perfectly here - in fact perhaps even more so, since the Antique Modern does everything so well, without the intrusion of that mahogany honk.

It's got to be said it's a better looker too, and we have no qualms about the ageing - including that excellent roasted maple neck. At a chunk under three grand, it's fairly priced, too.

Since we have Mr Govan at our disposal, let's allow him a few final words: "In a trio setting such as The Aristocrats this guitar sounds bigger and fills out more frequencies," he muses. "Arguably, it's also the most versatile of my three models, in terms of being able to do the clean stuff and filthy stuff equally well.

"So I guess it's my current preference because it seems so well suited to the Aristocrats stuff. For the record, apart from one track where I used my old ES-335, I recorded the whole thing with it." Enough said!