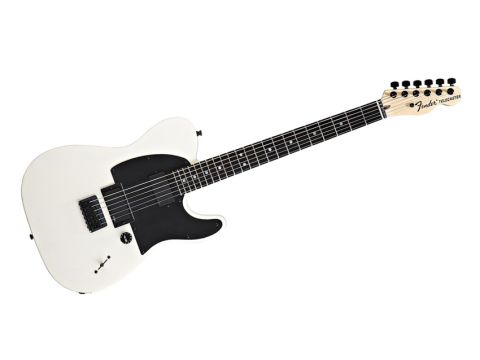 With a pickup upgrade, the improved tones would take the Jim Root Tele to the next level, but even at its most basic, this is simply a great rock guitar.

The iconic Fender Telecaster might not be the first guitar you think of when it comes to metal.

But pioneering modern guitar heroes such as John 5 and Jim Root would beg to differ, with both guitarists boasting signature models of their own. While John 5's Squier model marks a significant departure from its higher-priced counterpart, Jim Root's own affordable option seems to be much nearer to his stage instrument. A closer inspection is required.

"The choice of passive pickups gives this Squier a bit of an edge if versatility is your thing."

Straight away it's reassuring to see that a lot of the core elements from the original Jim Root Tele are indeed present and correct. The mahogany body has a nice hefty weight to it and looks great in its matte white finish. Played acoustically, you can hear the midrange and resonance that's so important with mahogany guitars, which bodes very well.

The neck drops the ebony fingerboard of the full-fat Fender version in favour of rosewood, but more importantly features a 12-inch fingerboard radius. If you're not familiar with this, it means that the fingerboard is flatter than the one you'd find on a regular Telecaster, which would normally be around 9½ inches.

As a result, string bends and other acrobatics are considerably easier to pull off. In combination with the satin-finished, modern C-shaped maple neck, it's a joy to play and should prove a hit with rock and metal fans who don't want a super-skinny neck for playing at speed.

Arguably the biggest sacrifice Squier has had to make is in the pickup department, swapping active EMGs for a set of passive humbuckers. Active pickups aren't for everyone, though, and if they're not your thing then you you'll appreciate the saving that this Squier version makes.

As suspected, the choice of passive pickups gives the Squier a bit of an edge if versatility is your thing. You might think we're mad plugging a Jim Root guitar into a low-gain valve amp, but good clean tones are important and, under test, these passive units do an admirable job of conveying that rich mahogany tone.

Move on to a high-gain amp (what better than Jim's own signature Orange rig?) and this guitar positively laps up distortion. It's at its happiest when it's tuned down a couple of steps, chugging out riff after riff.

What's impressive is that the stock pickups actually cope reasonably well with complex chords, letting the notes ring out in all but the most heavily saturated of settings. They don't have the detail and richness that you'd get from a more expensive set, but at this price they hold their own well enough to satisfy these ears.

Squier has really done a great job of bringing the Jim Root Telecaster to a competitive price point. The fingerboard radius makes this an extremely playable guitar and the satin finish is a welcome change to the high-gloss budget models we're used to seeing.