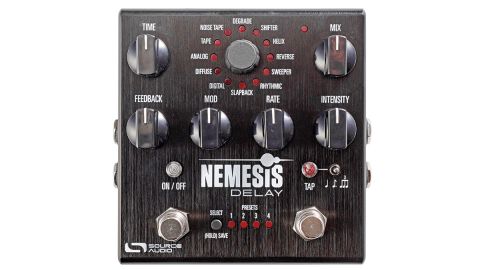 There's a lot to like about the Nemesis: it's easy to use, has a pedalboard-friendly footprint and features a wide range of very usable sounds - all with practical control options. One to try.

Do-everything delay pedals like Strymon's TimeLine and the Boss DD-500 are a common sight on pedalboards these days and the latest new kid on the block of a similar ilk is the Source Audio Nemesis.

Part of Source Audio's 'designed in the USA but made in China' One Series of pedals, the Nemesis has a larger footprint than its siblings in this series, some of which we'll be featuring soon.

The pedal features 12 different delay engines - available for selection from a front panel knob - but goes beyond that, in that it is compatible with Source Audio's Neuro app for iOS and Android, which has something of a similar vibe to TC Electronic's TonePrint and connects to the Nemesis via a wired connection from your phone's headphone output.

Neuro gives access to 12 more engines that can be loaded into the pedal, provides an editor with extra parameters beyond those controlled by the physical knobs, and offers access to a library of sounds - either factory sounds, sounds from other users, or sounds that you have created and saved.

Nemesis features stereo delays - every engine operating in stereo multi-tap mode - but can be used in a standard mono signal chain. There are, in fact, several ways to configure the outputs, such as true stereo and getting a stereo signal from a mono input.

Particularly useful, if you are running a mono signal, is to use the spare outputs as an external loop, so you can insert another pedal into the feedback loop of the delay line.

You can set the delay time via the Time knob, but the pedal's second footswitch can be used for tap tempo, allied to three beat subdivisions (quarter notes, dotted eighth and triplets).

There are also standard Feedback and Mix knobs for the delay, the latter offering a fully wet mix if desired. If you want to add some modulation to the repeats, the Mod and Rate knobs will dial in its depth and speed, while further tweaking of the sound's character is enabled by the Intensity knob, which has a different function for each delay engine.

For many of the engines, it offers some form of EQ, but can do such things as select different patterns for the Rhythmic delay and set the pitch-shift interval for the Shifter delay.

If you dial in a favourite sound and want to keep it, the Nemesis has 128 presets that can be saved internally, eight immediately available via a front-panel button and the rest recalled using a MIDI controller. There is full MIDI functionally via the five-pin MIDI input or the USB port, including tempo sync to MIDI clock.

Between them, the delay engines offer a range of sounds that should cover most musical needs, from emulations of vintage classics through standard digital delay to more esoteric options that make creative use of modern DSP, including pitch-shifted and filtered delays.

There's a BBD analogue-delay emulation and two types of tape delay: Noise Tape, focusing on the grittier sounds of degraded tape, as opposed to the cleaner Tape engine.

Diffuse is a delay that blends nicely with guitar sound as it smears and softens the attack of the repeated signal, while Helix has similarities to the popular shimmer reverb effect, in that it combines reverse delay with an octaver for some ethereal pitch-shifted ambience drifting like a mist above and around your playing.

There's plenty of real-time control available for performance effects, too. An expression pedal can be connected to control any combination of knobs, and the depth and direction of each can be programmed. There's a standard expression pedal input (also available for an external footswitch), plus a mini jack for pedals such as Source Audio's own Dual Expression Pedal or Hot Hand wireless controller.

Also, when not being used for tap tempo, the footswitch can initiate a hold/freeze effect for as long as it is held down, so you can, for example, keep a rhythmic delay going on and solo over it.

The Nemesis is not aimed at guitarists who are happy with just a simple delay on their 'boards; it's one for the delay aficionados who'll be well aware of the market- leading names out there.

Source Audio may not be quite as well known as, say, Eventide, Boss or Strymon, but it has come up with a pedal here that can go head to head with them at a very competitive price.