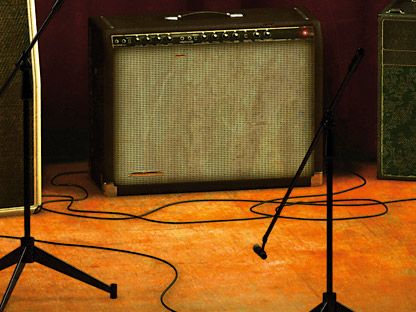 There is no shortage of computer-based amp simulation available these days, the general approach of most manufacturers being to provide a large number of modelled amps, cabinets and effects with endless tweaking options.

Swedish company Softube has tackled it differently, emphasising ease of use with a small number of high quality sounds.

Vintage Amp Room's approach is to put one of each of the classic triumvirate of Fender, Marshall and Vox in a single virtual space where you can choose any one amp and have access to its control panel, plus a number of virtual mic'ing positions.

VAR is strictly a plug-in (it has no standalone mode) and is available for various formats. The Native version can be used in VST, Audio Units and RTAS, which means that it is compatible with the many software recording packages including Cubase, Logic and Pro Tools LE.

There is also a version for TDM Pro Tools systems plus a version that runs on TC Electronics DSP systems - the Softube brand is actually distributed by TC in the UK.

After inserting VAR in a plug-in slot in your recording software you are faced with a cosy graphic interface showing one of the amps in a room. Dragging the mouse across the virtual backdrop takes you across the room to the next amp - alternatively, you can choose a preset from a drop-down menu that accesses a specific amp.

Each amp has its control panel at the top of the graphic with mouse-adjustable knobs plus a virtual mic on a wheeled boom stand that can be grabbed with the mouse and moved.

There are options to move the whole stand various distances from the speaker and to move the boom so that the microphone position varies from on-axis pointing directly at the centre of the speaker through various off-axis angled positions.

Softube's stated philosophy is to "focus on quality and accuracy" so VAR must stand or fall on whether those two attributes are present in its sounds and to our ears it stays resoundingly upright.

The tones here are among the best modelled amp sounds we've heard, with loads of tonal detail in the crucial midrange and a crisp high-end chime that can be converted to a lovely shimmer courtesy of the tremolo available in the Fender and Vox models.

As the gain is cranked up, there's an authentic raw edge to the overdriven sounds, which is responsive to guitar volume knob adjustments, cleaning up nicely when required.

The virtual mic'ing works extremely well - initiating the sort of tonal changes that would be apparent from moving a real mic around. Plenty of subtlety is available both tonally, and in adding ambience by moving the mic further into the room.

However, while mentioning ambience it's a disappointment that Softube didn't see fit to add modelled spring reverb to the Fender model - part and parcel of the Fender sound we think - but it's not a disaster as the sort of pro-users VAR is likely to appeal to should be able to add a spring reverb plug-in to the chain.

Many professional studios always have a Fender, Marshall and Vox on call so we can see exactly where Softube is coming from. The concept is a sound one and is well-executed - Vintage Amp Room is as uncluttered and straightforward as this sort of thing can get.

Sound-wise, the emulations should hit the spot for anyone looking for utilitarian and authentic amp sounds in the three favourite flavours. For over £200, you might expect more features, but otherwise it's excellent.