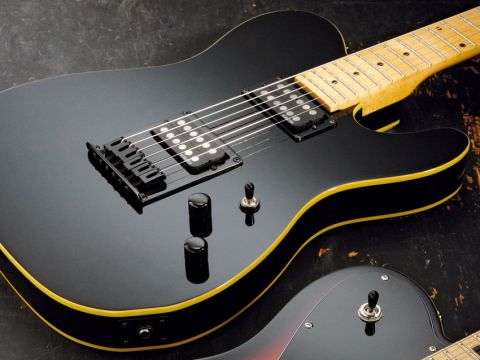 The PT is a modern classic with great playability and tone, and pickups that can kick your teeth in.

Experimentation was the name of the game in the '70s, and we're not just talking hairstyles and naughty substances - the era saw an explosion in tonal tweaking and guitar modification.

In 1979, one of these assembled guitars found its way into the hands of Pete Townshend of The Who. Pete was in the process of retiring his 'numbered' Gibson Les Paul Deluxe guitars when his tech Alan Rogan found a Schecter in Manny's Music in New York.

Pete fell in love with the guitar and subsequently had UK luthier Roger Giffin, and later Schecter, build him more examples featuring his favoured set-up of a Fender Tele-style body loaded with a pair of high-output humbuckers.

Pete played his Schecter guitars onstage with The Who from 1979 to 1988.

While originally offered to the public as the Saturn model, the production version of the Townshend-esque Schecter is now known as the PT.

The subtle hint of its model name aside, the new Schecter PT is not a Pete Townshend signature model. The pimped PT is inspired by Pete's guitars, but the specifications do differ. For example, Pete's guitars had mahogany and poplar bodies; the new PT is made of alder.

The PT is essentially a Frankenstein's monster. But before you light your torches and head for the castle, know that the gene-splicing has paid off big time.

Schecter has taken the original '50s design and injected some nitro in the form of a pair of Super Rock II humbuckers studded with stonking great polepieces.

The other standout feature is a neck that feels pleasantly chunky and comfortably slim all at once - a tough balancing act for sure.

The addition of a 356mm (14- inch) fingerboard radius and 22 well-dressed jumbo frets makes playing the PT a dream. Bending strings above the 12th fret is effortless and choke-free.

Although the PT has been stripped down to its basics (one volume, one tone, etc) at 5.1kg it's a chunky old beast that feels reassuringly solid when it's hanging from your shoulders.

Before we get down to the serious business of rocking out, we should clear something up. According to its spec list, the PT model comes fitted with coil-taps, activated by pulling on the tone knobs.

In fact, it's equipped with coil-splitters, not taps. Like the whole 'vibrato/ tremolo' can of worms, this is a classic misnomer perpetuated over the years by many guitar manufacturers and players alike.

It's not a big deal, but it does merit an explanation. Most often used on single-coil units, a coil-tap bypasses a portion of a pickup's windings to reduce output.

A coil-splitter completely shuts down one of the coils in a humbucker to produce a true single-coil sound. So, there's a big difference between the terms.

A judicious tap with a screwdriver, and a quick call to the helpful folk at Schecter's UK distributor, confirms that what we're dealing with here are coil-splitters. Glad we got that sorted out.

The great thing about the PT's Super Rock II humbuckers, when run through the clean channel of our amplifier is that the pursuit of power hasn't produced any tonal harshness.

These pickups sound fantastic clean, unleashing an infectious mix of punch and sparkle. By way of contrast, the neck pickup sounds fat and juicy - they fit the bill for jazzy chords and clean blues licks perfectly.

It's easy to see why Super Rock IIs are sought-after retrofit units. You can add us to membership list of the fan club.

As expected, the PT gets on great with overdrive. Depending on the gain level, you can get an incredible range of tones from razor-sharp punk to all flavours of rock and metal.

While we realise this isn't a Townshend signature model, we couldn't stop ourselves from belting out some Pete-style power chords. Even dialling in a small amount of overdrive produces a level of power and sustain that's truly impressive. Socks were indeed blown off.

The PT is a much more versatile guitar than we ever expected. Most players will find a tone on this guitar that will keep them coming back for more and more. We found it tough to put down. This is a brute, albeit a tonally versatile one.

The PT is a bit special. It's a cool concept, fully realised. Taking a vintage- style body and hot-rodding it with some modern firepower is old news these days. But in the '70s and '80s, when Pete Townshend was busy commissioning his Schecter guitars, the concept was new and exciting. We think it's still a thrilling package today.

In fact, if you're looking for a versatile twin-humbucker guitar, inspired by the preferences of one of the greatest rock guitarists and tone freaks of all time, there's really no substitute.