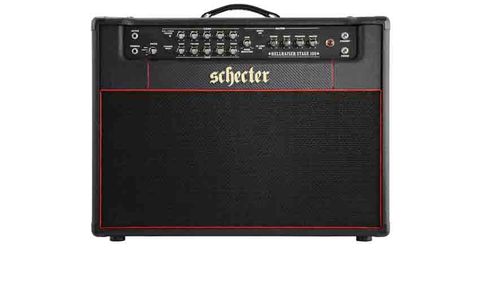 If you're into metal then the Hellraiser is one amp you can't afford to miss.

It's a long time since Schecter Guitar Research first opened its doors back in 1976. Originally known for replacement parts, Schecter went on to be among the first real custom shops. Indeed, people of a certain age will remember the S- and T-styles wielded by the likes of Mark Knopfler and Pete Townshend back in the 1980s.

Now, under the direction of Michael Ciravolo, Schecter has been successfully mining a new creative seam in the US modern-rock movement for nearly two decades, with some superb six-, seven- and eight-string instruments.

In 2012, a return to the company's Californian custom shop roots was also marked by the introduction of a new range of amplification that has just started to filter into Europe. Enter the Hellraiser, which we're looking at this month in its 2x12 combo format.

Designed in the USA with assistance from amp guru James Brown, and made in China, the Hellraiser's name tells you from the outset that this is not a product for shy retiring types. It's a big box intended to deliver a big sound and in this 2x12 combo format, it's seriously heavy - thanks mostly to a pair of massive transformers that punch 100 watts into a pair of Celestion Vintage 30s.

The cabinet is well built and neatly finished with red piping and a carbon fibre-effect vinyl insert. There's just one carry handle on the top, which isn't a good idea for an amp that weighs over 30 kilos - we'd expect to see some grabs on the sides at least, and preferably castors.

Inside the fan-cooled steel chassis, the Hellraiser's electronics are mostly contained on one large PCB, which includes the valve bases. The component and assembly standard is very good, and there's no doubt the Hellraiser is easily capable of standing up to non-stop touring.

A proper two-channel design, the Hellraiser incorporates some unique features intended to appeal to metal and rock users, including an input circuit tuned for active guitar pickups and a global focus control that tunes the amp's dynamic response with options for tight, normal, seven- and eight-string use.

There are two independent channels, labelled clean and lead, with separate gain, volume, bass, mid and treble controls. There's a noise gate on the lead channel and a variable boost, together with a series effects loop; both can be footswitched.

The Hellraiser's master section also features a level control for the spring reverb, together with volume, presence and boost level controls. Rear-panel extras include an effects loop, a half-power switch and a speaker-emulated DI output with a ground lift switch. All in, the Hellraiser looks, sounds and smells like a solid, professional amp that will be totally reliable when used night after night on the road.

The Hellraiser's clean channel is warm and responsive on both UK and USA voice settings with plenty of headroom, making it ideal for use with effects. With 100 watts of power on tap, the clarity and balance across the strings is excellent, particularly if you use an active guitar in the specially tuned active input, which has extended frequency response and headroom. We plugged in a Duncan Blackout- equipped ESP to check this out and were impressed with the natural tone.

The lead-channel overdrive is very American in flavour, with plenty of bite for harmonic squeal effects and a fast bass response that's ideal for modern metal. Kicking in the boost adds extra volume and sustain, which can be tuned to taste from the front panel. The Hellraiser doesn't seem to mind whether you use single coils or humbuckers - the regular normal input worked well with a Les Paul and a Strat, and both guitars sounded rich and full when wound up to gig levels.

Using the active ESP added an extra dimension when plugged into the dedicated active input, with extended bass, treble and overall clarity making the amp sound even bigger and louder - not that it needs it! With those massive transformers and two efficient loudspeakers, the Hellraiser is extremely loud if you want it that way.

The Hellraiser is a serious rock amp, with a flexibility and depth of tone to cover a wide range of styles. The combo's size, weight and lack of portability make it less practical for home users and occasional gigging - it's certainly not something to casually chuck on the back seat of your car.

However, sonically, the Hellraiser nails the latest rock and metal tones with ease, and its capabilities with extended-range instruments and active pickups aim it more at serious users. There's a lot of hot competition in this price bracket, nevertheless, we think the Hellraiser is likely to raise the temperature by more than a few degrees.