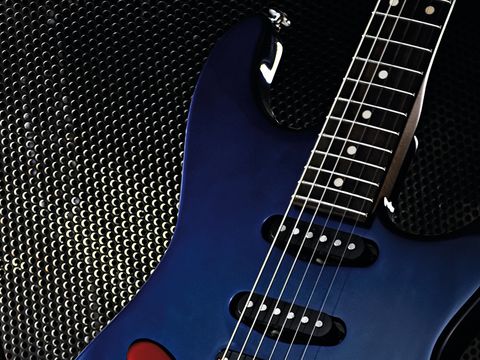 This is a stripped-down, serious tool for amateurs and pros alike.

No sooner had John Suhr revealed his intention to offer import versions of his USA-made Standard and Modern models than the online naysayers began to, well, say nay.

"How can a Chinese-made guitar be worth that kind of money?" some angrily typed. "John Suhr is selling out his existing customers." Considering his hard-earned reputation for producing outstanding electric guitars, you'd think John's followers would cut him some slack.

After a period taking custom orders from the likes of Eric Clapton and Mark Knopfler at Pensa- Suhr in New York, John took up the position of senior master builder at the Fender Custom Shop.

Post-Fender he established Suhr Guitars, a company that has Scott Henderson, Guthrie Govan and Michael Landau in its stable. He clearly knows his onions.

While Suhr has cut costs having his Rasmus models built in China, they come loaded with the same Japanese Gotoh hardware and US-wound pickups as John's £2,000-plus USA beauties.

Each Rasmus guitar also pays a visit to Suhr HQ in Lake Elsinore, California for a final set-up that includes a fret dress on a Plek machine to help towards great playability.

The Suhr Standard body shape has been around since the '80s - or the '50s if you take into account this guitar's obvious inspiration.

Formed from North American alder, the Standard veers from the classic S-type template with a tapered neck heel (under a four-bolt neck plate) and a tasty scallop at the rear of the treble side cutaway. Both tweaks promote access to the upper frets, natch.

The Standard's bolt-on maple neck is topped with a slice of Indonesian rosewood, studded with 22 well-seated and polished nickel jumbo frets.

The neck is accurately described by Suhr as having an 'even C slim' profile, while the headstock is finished in the body colour and carries a set of locking tuners. We do have a small grumble about the headstock: we're not feeling the Rasmus logo. It's a classic case of personal preference but it looks dated to us; like something Will Smith would have had emblazoned on the back of an oversized jacket on The Fresh Prince Of Bel-Air.

The US-made Suhr SSH+ and brace of ML (aka Mike Landau) single-coil pickups are tied to a master volume and tone, and a five-way selector switch. The switching system is as follows: bridge humbucker; split inside bridge single-coil and middle pickup; middle; neck and middle; and neck only.

The non-locking Gotoh 510 vibrato comes with a push-in arm that's discretely threaded on the inside; when you push it into its hole in the vibrato plate you can turn it until it goes tight.

Additional arm anchoring is provided by a small Allen- headed grub screw. There's a tiny amount of pull-back available from the 510, but you can have a Standard with the same double-locking Gotoh Floyd Rose and twin- humbucker set-up if you ask for the Standard S200.

Compared with a Seymour Duncan JB, the SSH+ 'bucker featured in the bridge position has a slightly lower output. Plugging in, you get a bright, punchy tone and excellent string definition no matter how much filth you dial in.

The SSH+ proves that you don't need an overwound ceramic behemoth to pull a killer rock or metal tone from a guitar. Dial in some compression and you get a perfect, smooth '80s rock tone. Harmonics leap from thefingerboard like fireworks and the sustain on tap is excellent.

The neck 'bucker offers bags of vintage warmth and sustain. It pumps out stunning vintage-voiced single-coil tones. If they were any more 'glassy' you'd smell the Windolene.

The combination of vintage and modern tones makes this a seriously versatile guitar in the truest sense of the term. No matter what style of music you play, this Rasmus model hits the modified S-type bullseye.

None of the aforementioned doom merchants had actually tried a Rasmus before they unleashed the negative vibes. As ever, the proof is in the pudding and today's special for the doubters is a big slice of humble pie.

We like the fact that your money appears to have been spent on the important stuff - playability, pickups and hardware. You know you're on to something good when the only thing we can find to moan about is that headstock logo.

That should also help put to rest the backward notion that the Chinese can't cut it at this price point. Every guitar manufacturer builds to a price and the Chinese factories are no exception. Okay, Rasmus guitars receive a final spit and polish at Suhr HQ in California, but the quality of construction and flawless finish are a testament to the abilities of the Asian workforce.

The relentless box-ticking of Rasmus Standard S100 takes the sting out of not being able to commit to the loftier price tags of John's US-built guitars. For many of us these guitars will be the only way to 'be Suhr'. That would be just fine by us.