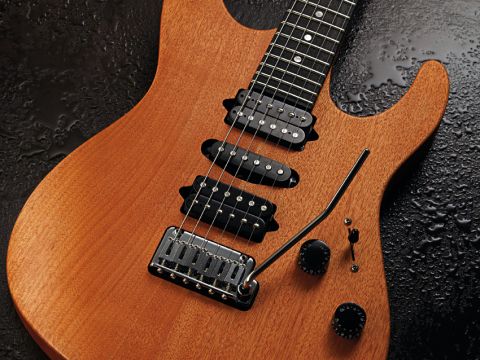 John Suhr may have cut some corners to bring the Rasmus in on budget but the crucial strands of DNA remain. This guitar delivers on every level

You might recall that we had our socks blown off last year by a couple of Chinese-made Rasmus versions of John Suhr's Standard and Modern electrics.

Well, as we reluctantly packed the guitars off back to the distributors we distinctly remember thinking aloud, "Wouldn't it be cool if John sorted out a Rasmus take on the US-built Guthrie Govan signature models?" As it turns out, the jaw-droppingly talented English guitarist was already way ahead of us.

"The Rasmus's bridge SSH+ humbucker is punchier than the last 10 minutes of a Rocky movie."

"I always liked the idea of a more affordable version that captured the general spirit of the original Suhr GG guitars," Guthrie Govan tells us. "The whole concept made a lot of sense to me."

You don't get the Tremol-No device and blower switch featured on its US cousins. You do get the US-spec Gotoh 510 vibrato that swings both ways thanks to a recess routed in the guitar's top, however.

The direct-mounted (aka screwed to the body) US-made Suhr pickups include an SSH+ humbucker at the bridge, an SSV 'bucker loitering at the neck and an ML Standard single-coil in the middle. The pickups are wired to a master volume, master tone and five-way selector switch.

The Rasmus is supplied with a pro-quality gigbag and Elixir Nanoweb 0.010 to 0.046 gauge strings. Like the other Rasmus models, Guthrie's guitars make the trip from China to the Suhr factory in Lake Elsinore, California for a fret dress on a Plek machine and final set-up before being shipped to dealers.

According to Guthrie this attention to detail puts the Rasmus on a level playing field with his US guitars. "They feel pretty much identical," he says. "Much as you would expect, given that all the set-up and general tweaking is done in the same factory."

The bridge SSH+ humbucker is punchier than the last 10 minutes of a Rocky movie. Feed it some overdrive and it sounds a lot like a great Gibson SG, a guitar very close to Guthrie's heart.

To help emphasise this guitar's tonal versatility, position three on the selector switch unveils a convincing Tele-type tone that works great for chicken pickin' and pedal steel licks. We also can't get enough of the glassy 'Jimi' tone of the split neck 'bucker. At every click of the switch the Rasmus just sounds so alive.

"Tonally, I think the mahogany on the Rasmus may be a little brighter than my US guitars," explains Guthrie. "It's not quite so honky, but arguably a little clearer and glassier for the clean tones. In terms of a hypothetical SG-to-Strat ratio, my US mahogany guitar might be 70:30. The Rasmus is more like 60:40. I'm not sure there is such a thing as a guitar for everyone, but I think the Rasmus comes as close as anything else that's out there."

We think Mr Govan has the nail hit square on its nut. Getting as many great sounds as possible out of one guitar is precisely what the bloke whose signature is silk-screened on the back of the Rasmus headstock is all about.

If a player of the calibre of Guthrie Govan can get what he needs from this fantastic guitar, the rest of us will be just fine.