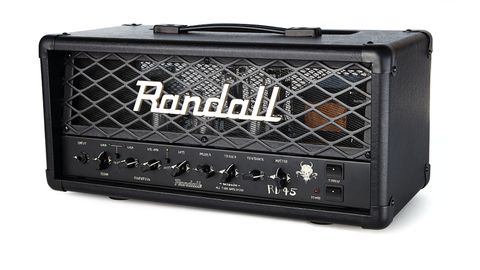 The Diavlo not only sounds great, it's also highly affordable, and reinforces Randall's position as a metal-amp titan.

Don Randall was Leo Fender's right-hand man during the company's glory years, and was responsible for (among other things) naming the Stratocaster. His company, Randall Amplification, also has a rich legacy stretching back to 1970.

Today, the company is very much aligned with the metal fraternity, with an artist roster that includes George Lynch, Scott Ian and Kirk Hammett, to name just three.

For the past couple of years, high-gain specialist Mike Fortin has been on board, resulting in several new designs and a new range: the Randall Diavlo series, which includes this mouthwatering compact head, the RD45.

The Diavlo amps are designed in the USA and built in China to a very high standard; the RD45's sharp styling, crisp joinery and attention to detail exudes class and attitude, with high-quality PCB-based electronics that aren't going to quit on you.

It's a proper two-channel design, with a shared four-band EQ and handy footswitchable boost mode that works on both channels. A quality series effects loop and speaker-emulated balanced recording output complete the picture.

The Diavlo is quiet in operation, with minimal background hiss and hum - impressive, given the amount of gain on tap. The clean channel has a sweet Fender-ish vibe to it, aided by the 6L6- powered output stage.

There's plenty of clarity, without the brittle high end you sometimes get from modern metal-influenced amps. The overdrive channel is fat, with an aggressive grind that's perfect for heavy styles. There's a fast attack and good definition to the lows, which makes it ideal for detuning or seven-string riffing.

The overdriven highs are similar to the clean channel - sweet but not shrill, with an edge that makes off-the-pick harmonics almost too easy to pull out. Kick in the boost for yet more overdrive, adding extra filth without losing the fast attack; it also fattens the clean channel without adding much in the way of overdrive, unless you max the clean gain control - which is not recommended.

We liked the speaker-emulated direct output - plugged straight into a desk, recorded into Logic, it sounds a lot bigger and more expensive than it is. It's okay with single coils, but you'll get the best from humbuckers and active pickups.

Not an amp for shrinking violets, Randall's Diavlo RD45 kicks large amounts of USA-influenced butt and absolutely nails the modern American metal tone, with no real need for extra help from stompboxes.

Not only is it loud enough for any stage, it also sounds good at low volume, and you can record silently using the direct out - although you still need to have a speaker connected, because the amp doesn't have a built-in dummy load. Tempted?