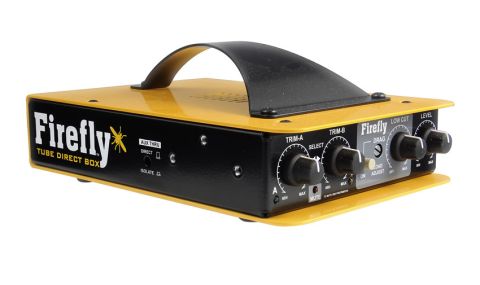 A thoroughly professional valve DI box, should you need one.

Radial Engineering is renowned for its professional stage and recording tools: preamps, signal splitters, EQs, DI boxes and more. This valve DI is a two-channel direct box that will work with any stringed instrument you'd care to plug in.

It's a lovely design. The sweeping handle doubles as protection over the internal 12AX7 valve's vent. The metal casing extends over the knobs and switches for protection, or there's provision for rack mounting. In fact, it's rare to find something that's this well sorted - practically and aesthetically - both on stage and in the studio.

The front end is, according to Radial, 100 per cent, zero negative feedback class A, while the output is handled by the 12AX7 and a transformer. The valve is running at 48 volts, not the full 300-ish of a high voltage valve unit (such as an amp). Low cut, an effects loop, phase reversal, tuner out and a ground lift all aid practicality.

Two switchable independent inputs mean you can swap between two separate instruments quickly without having to re-adjust settings. Its use for electric guitars isn't immediately obvious, but just as it is with passive pickup'd electric basses, a good electric guitar DI is as much about optimum input impedance as strong level. To whit the Firefly's Drag control offers a range of 22k to 500k, which is the optimum range for 'normal' magnetic pickups.

In our tests, guitars or basses with weaker pickups are definitely helped when tweaking the Drag control. Some of the 'artificial' harshness is lessened and it helps marginally with playing feel, too. Drag has negligible effect with actives or other preamp'd instruments.

Bypassing the Drag bumps the input up to ultra-high impedance, four mega-ohms territory, a good place for piezo transducers that don't benefit from a preamp onboard the instrument.

In terms of its general sound, Radial admits that it has 'purer' direct boxes, and we'd agree. Firefly warms things up, which is no bad thing for guitars and basses.

It's neither an overt fattening nor a significant EQ shift; it's a degree of 'real' warmth and depth that's subtle, but it can pay dividends at loud stage volumes and it is definitely noticeable in recordings, especially on DI'd acoustics and bass. You can achieve all of that from a decent, dedicated preamp it should be said, but the preamp may not be up to the live task quite so happily.

If you're using it live, there's also a fixed-level, buffered, high-impedance jack to feed your amp, which means you can DI through the Firefly and also plug into your amp as you normally would.

Alternatively, a mini-switch enables this output to be a duplicate of the main XLR output including the valve stage and other sound shaping features. The effects loop can be included or omitted from the aux/thru output.

The Firefly is a problem solver: a tool with a very specific set of intentions. Nobody is realistically going to buy it just for electric guitar, and for sure there are lots of other ways you could spend £600 to sound better. But if you've already done all that, and you need a cracking-sounding DI for a range of stringed instruments in professional live and recording situations, well, this is it.