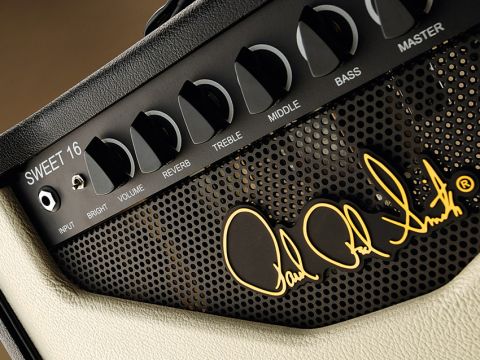 Are PRS's amps as good as its guitars? Not yet, but despite some reservations, the Sweet 16 stands as a very strong statement of intent.

Building guitar amps and making a profit is one of the hardest jobs in the MI industry. Even in the USA, the most guitar-friendly market in the world, there are dozens of 'also-rans' who start with great promise but quickly fade into obscurity for various reasons.

Existing high-profile brands who move into the amp market don't seem to be immune from this either. And so it was for Paul Reed Smith in the late-eighties when the company launched its solid-state HG (Harmonic Generator) series, designed by Eric Pritchard.

In an era when the future of valves seemed decidedly uncertain, the HG could have been the right amp at the right time. However, circumstances dictated otherwise and, despite features that were truly ahead of their time, the HG soon disappeared from PRS catalogues.

After a hiatus of nearly 20 years, PRS has now re-entered the amp market with a range of valve heads and combos designed by Texan amp builder Doug Sewell, who now heads up the PRS amp division.

Sweet 16 head and its matching cabinet are finished in a neat two-tone black and off-white vinyl PRS calls 'Tuxedo'. Both boxes are built from solid pine and for the most part the vinyl covering is neatly executed.

There are a few small ripples in the corners of the white panel on the head cabinet that really shouldn't be there in this price bracket, and the radiusing on the 'V'-shaped cut-outs could be a lot more even.

The black piping around the front of the head cabinet is missing on the speaker cabinet, although this is a prototype unit so we'll reserve judgement. The Sweet 16's electronics sit inside a thick aluminium chassis with welded corners; there are two quality PCBs, one for the power supply components and one for the preamp and reverb circuitry, which also contains sockets for the four preamp valves.

These are quite deeply recessed and could prove difficult to replace, however the two 6V6 power valves are chassis-mounted, as are all front and rear panel components. This construction approach makes the Sweet 16 a robust little amp that's unlikely to have any reliability issues.

Watch as Simon Bradley (Guitarist) talks us through the Sweet 16

The controls are clear, with a straightforward layout of volume, master volume and three-band EQ complemented by a bright switch and a level control for the Sweet 16's short-pan Belton reverb spring.

On the rear panel there are two speaker sockets with a toggle switch to select output impedance. This switch could easily be knocked to a wrong setting and PRS should perhaps consider changing it to a tamper-proof design. Minor finish issues aside, overall the Sweet 16 is a quality piece of kit.

We used a variety of quality instruments to check out the Sweet 16's affections: our regular Duncan Alnico Pro-loaded Strat was joined by two high-end monsters in the shape of an early 1994 PRS McCarty with outrageous acoustic sustain and a Fender '51 Nocaster, arguably one of the best 'production' instruments ever to come out of the Custom Shop facility.

One of the first things we noticed was that the Sweet 16 has almost too much treble, forcing us to roll back tone controls on amp and guitar for the best overall balance. But all three guitars were reproduced with a transparency that enhanced their distinct characteristics: the subtle mid-range and silvery treble bite of the McCarty, the twang and snap of the Nocaster's bridge pickup and the slightly compressed quack of the Strat's in-between switch settings are all delivered with authority and a pleasing bouncy response.

With the gain and master volume wound up more, the Sweet 16 pushes into a nice punchy distortion that maintains clarity and definition right up to having everything maxed out.

Used like this, we preferred the reverb off as it distorts a little too much, spoiling the effect. But that's a matter of taste. Even with its single 12-inch driver, as in this Vintage 30-equipped cabinet, the Sweet 16 is plenty loud enough to cope with an un-mic'd drum kit, making it a useful and portable rig for small to medium gigs as well as a powerful studio tool.

On the downside, proper clean headroom is somewhat limited and we noticed that the speaker cabinet managed to vibrate the lightweight head - hitting a B or C barre chord on the seventh or eighth frets at full volume caused the head to start dancing around quite wildly.

It's still early days for PRS's amp project and launching a new high-end amplifier range in the current economic climate was never going to be easy. On one hand, as good as the amp is, the price is still hard to justify, although having checked with PRS's UK distributor we were told it will have a considerably lower street price, which certainly sweetens the deal.

Even so it'll face stiff competition from more established and in many cases affordable brands. But that aside, overall the Sweet 16 is a good-sounding and nicely made small amp that many players would feel at home with, especially those used to setting up a lead tone on the amp and using the guitar's volume control to clean things up.

Fans of US country-rock and blues fusion, typified by artists such as David Grissom and the legendary Steve Miller, will love the Sweet 16's twangy vibe and Texas-approved distortion colours - it certainly has the right tone and attitude to cover anything that crosses into those genres.