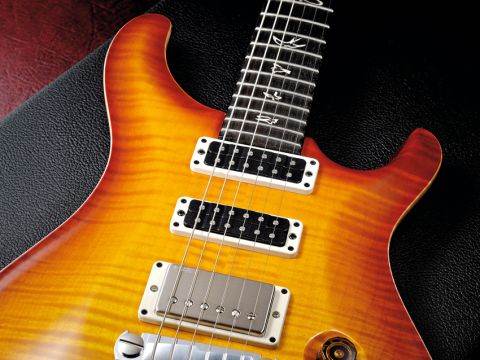 For any player who values a guitar's sound over fashion, the Studio is going to take some beating. A high-level, thoroughly pro and highly versatile instrument.

The new PRS Studio bears little resemblance to the original Studio that was launched in 1988. That was an all-mahogany Standard but with a humbucker at the bridge and two conventional single-coils - the first production PRS guitar to feature them.

Take a look at the PRS Studio in action...

A maple top version was added in 1989, but the model left the line in 1990 (although the Studio's pickup configuration was offered as an option until 1996).

But, as we've written on numerous occasions, the modern PRS guitar is quite a different beast to the guitars that launched the company.

Over the past few years PRS has installed numerous tweaks that have improved what was already a very good guitar.

With that sorted to the satisfaction of Paul Reed Smith's rather picky ears, a new pickup programme kicked off with the 1957/2008 humbuckers.

For this year we have more changes still, notably the V12 finish - a new hybrid nitro-cellulose/acrylic - and new 'pattern' neck shapes, not to mention a raft of new models.

Like the McCarty and the 305, the Studio's body thickness is slightly increased to 52mm giving subtle girth to both the feel and sound of the guitar. Weight-wise it's bang on 3.6kg (8lbs) - perfect for this style.

Our review models sports a 10-grade flame maple top - which adds £499 to the base price of £2,999. It's certainly not the fanciest we've ever seen: in fact it has quite an understated look that sits very well with the similarly subtle sunburst.

Like interior trim on a new car, you'll have to decide if you think the extra is worth it - it certainly doesn't make the Studio go any faster! That said the top carve is noticeably more graduated than our reference 1993 Custom 22; the new finish looks vibrant and clearly very thin, with no build up around the neck heel, which protrudes approximately 44mm from the body.

The new 'pattern thin' neck profile - effectively a reworked version of the long-standing wide-thin - feels slightly fuller in the lower positions than a wide-thin profile we compared it to.

It's not particularly thin in depth if you're used to Ibanez and the like - approximately 21.3mm at the first fret, 22.2mm at the 12th - but the shaping is a beautifully rounded 'C' with no hint of a 'V'.

The fretboard is perfectly executed, with rounded edges and mirror polished medium jumbo frets - it plays like butter. The set-up and intonation are both perfect, with slight neck relief and a perfectly cut nut.

A minor addition is the new side dot material - "a synthetic bone/ivory" according to PRS's Bill Oertel - that is slightly more visible than PRS's standard nickel silver dots.

Unlike the two true single-coils of the original Studio, the 2010 model features a full-sized 57/08 at the bridge and a brace of 57/08 Narrowfield humbuckers, with their smaller string-sensing aperture, in the middle and neck positions.

In fact the only true single-coil sound comes from the pull/ push switch on the tone control that, when pulled up, voices the screw single-coil of the humbucker adding two more sounds to the sonic stew.

They're controlled by a relatively unusual choice for PRS - a Strat-style lever selector switch. It simply selects the three pickups in Strat-like fashion, while the classy proprietary lampshade knobs sit atop master volume (with treble bleed capacitor) and a master tone.

The concept of a 'studio' guitar suggests versatility, quiet hum-free performance and perhaps a certain character. The hardtail Studio has all of these qualities in spades. Acoustically there's generous resonant sustain - always a good start.

In the clean department - and referencing with various PRS guitars - the Studio immediately impresses with some rich Fender-y in-between tones, not quite as spiky as the 305's true single-coils, of course, but fuller and richer than a single-coil Strat we had to hand.

Solo, the neck NF is more focused than a standard humbucker, tighter in the bass and there's definitely a hint of single-coil quack. It's the halfway between a single-coil and a humbucker tone that impresses: roll off the tone control a little and it takes on a darker, jazzier P-90-equipped ES-330 type voice; reduce the volume control, wind the tone back up and it's more Strat-like, take the tone down again and it's more muted Tele neck pickup-like.

But turn both controls back up, kick in some crunch and you're into a Les Paul Deluxe's over-looked mini-humbucking tone. The middle pickup, when solo'd, is harder to pigeonhole, but 'fat Strat' gives you a good idea.

Played clean, the bridge 57/08 may be brighter and more clear sounding than you might expect, and output-wise it's only subtly hotter than the NFs.

But it's surprisingly versatile, even through a clean Fender amp. You can certainly nail some country twang and zing or in combination with the guitar's controls and some amp adjustments create a much more muted, smokier and jazzier voice.

Clean jangle with some tone roll-off gets us close to classic Ricky too, but in reality it's probably not meant to do that on this platform. As we dial-in some more classic rock/blues amp tones, the 57/08 shows a good blend of mid- range kick and clean transparency; again the volume and tone controls both alter the character and you find yourself recalling, well, virtually any player of the past 40 years that ever had a classic Gibson solidbody in their hands.

The Studio's secret weapons are the chameleon-like NFs. It's right up the street of the classic blues-rocker who wants some 'Fender' in their tone, or perhaps a more open-minded player who wants to explore the vast midway between a single- coil and a humbucking guitar.

It covers a lot of ground, but then so does the PRS Custom, or the 513, or even the 305. So does the Studio have your name on it? Well, it's a must-try for the player who wants versatility, but sits a little more on the Gibson-side of the tracks.

Regardless, it's well worth getting down to your local music shop and giving this and the other new PRS guitars a try, especially if you haven't played one for a few years. Just be prepared to make space in your collection for one of the finest electric guitars money can buy.