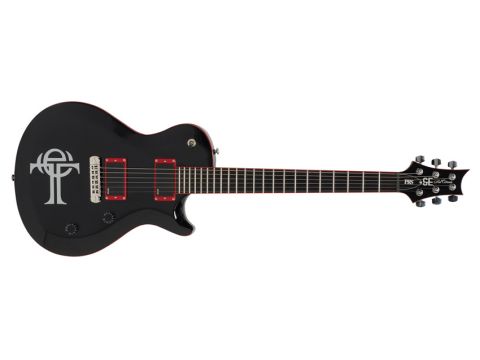 We like it when Paul Reed Smith's brand turns its hand to metal and Washburn's loss is definitely PRS's gain.

The last time we looked at a Nick Catanese signature guitar it had 'Washburn' inlayed on its headstock. That guitar was a US Custom Shop model with a price tag of £2,199 and it was a peach.

Why, then, has Nick switched his allegiance to PRS? Well, according to the Black Label Society and Speed X guitarist, he wasn't asked to renew his contract with Washburn when it expired back in January 2009.

While he was frankly miffed about the whole affair, Nick was soon able to console himself with a new relationship with PRS Guitars. We like a happy ending… And we love it when PRS gets its 'metal' on.

Most fans of the brand go ape for the figured maple tops and pretty bird inlays; we're more excited by the dark side of Paul Reed Smith's models. Nick's guitar fits the bill perfectly with its jet black finish, accented with red binding and pickup surrounds, and a thick mahogany body that not only makes the SE feel substantial, it also offers incredible sustain.

Playability is excellent, too, thanks to the 'wide fat' neck profile, jumbo frets and light gauge strings.

Plugging into our amp's clean channel, we're a bit taken aback by the blandness of the active bridge EMG 81. While raising the pickups helps a bit (EMG recommends that its pickups be set as close to the strings as possible), we'd still file both pickups under 'adequate' rather than 'inspiring' on a clean setting.

Whacking on the distortion, however, tells a completely different story. The bridge humbucker suddenly struts its stuff big-time, with pinched harmonics galore and the kind of sustain that would even impress a connoisseur like Nigel Tufnel of Spinal Tap. Notes seem to sustain forever, even at bedroom volume.

The neck pickup also responds well to filth. Playing lead licks above the 12th fret is inspirational. If your vibrato is up to scratch you're going to love this position.

Nick's new baby is a killer metal guitar that offers great playability and astonishing sustain. We're less chuffed with that silver 'Evil Twin' logo. It spoils the look and could discourage 'non-Nick fans' from giving this guitar a chance. Supply the logo separately, please, PRS!

Cosmetic nitpicking aside, though, you'd be hard pushed to find a better sounding metal guitar for this sort of money. OK, so the clean tones were uninspiring, but if metal is your business, this SE is a done deal.