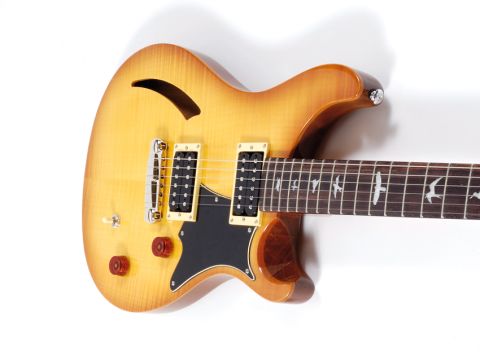 The PRS SE Custom Semi-Hollow has a chambered mahogany back topped with a slice of maple. In the SE Custom's case, its top is finished off with a flame maple veneer to make it look extra pretty.

The eye candy quota is boosted by a Rickenbacker-style 'cat's eye' f-hole, a flock of birds across the fingerboard inlays and a finish that makes this guitar look as though it's been dipped in honey.

"The SE is a bit lightweight for metal, but it's still a great overdriven blues and rock machine."

Speaking of the runny, sticky stuff, the neck on this guitar is the bee's knees. Our SE has the PRS 'Wide Fat' profile that fills your palm with plenty of wood yet still feels fast enough for any playing speed.

While the SE doesn't have any body contouring, there's a generous scoop at the treble-side cutaway that offers unhindered access to all 22 perfectly dressed frets.

The SE Custom anchors its strings on a simple, fixed-intonation wraparound bridge/tailpiece. If the lack of intonation adjustment freaks you out a bit, it will be reassuring to know that PRS uses this style of bridge on some of its US-built guitars, such as the McCarty. Besides, the intonation is great on our SE all the way up the fingerboard.

In terms of the finish, it's no exaggeration to describe our PRS as absolutely flawless. In fact, the only niggle we have is with the control layout.

The volume control is within easy reach when you need to use it, and while the tone is a bit far away, it's not enough to cause any real problems.

It's the pickup selector we're griping about. Look where it is. Your hand has to make a fair old excursion to reach the switch if you want to flick it quickly while playing.

Plugging in, the PRS has a bright airy tone that works really well for clean rhythm playing. The bridge pickup is well defined without being shrill, and engaging both humbuckers is just the thing for clean blues and rockabilly.

Neck pickup solo is the go-to setting for jazzy stuff. The SE is a bit lightweight for metal, but it's still a great overdriven blues and rock machine.

If you're fishing for a beautifully put together, almost perfect all-rounder, then the PRS SE Custom Semi-Hollow ticks those boxes big time.

Shop around and you'll find most dealers pushing them out at around £639 with a padded PRS gigbag. File that under a great deal.