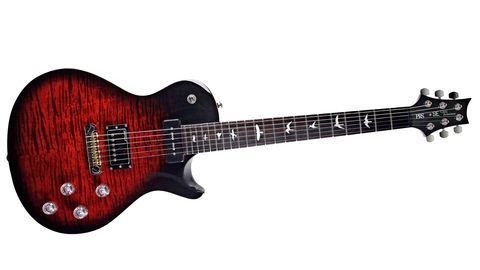 With faultless playability, flawless build quality, that stunning 57/08 'bucker, and serious good looks, this is one cherry that's ripe for the picking.

Avid followers of the work of Black Stone Cherry frontman Chris Robertson will know that his Southern hard rock sound has its foundations in  a love of the blues.

It makes perfect sense, then, that the man's new Korean-made PRS SE signature guitar reflects both  sides of his sonic character with  its combination of a vintage PAF-style humbucker - the classic-rock staple - and a blues-friendly Soapbar single-coil.

Robertson's SE is based on the US Paul Reed Smith Singlecut model. The bulk of the guitar's thick Les Paul-esque body is cut from mahogany topped with a sculpted maple cap, a flame maple veneer and a very appropriate Black Stone Cherry Burst finish.

Keep following the timber trail and you'll chance upon a glued-in 'Wide Fat' mahogany neck with a rosewood fingerboard. Call anyone wide or fat these days, you'll likely get a smack in the mouth, yet in PRS lingo 'Wide Fat' is a compliment - the brand's own vernacular to distinguish one of its most popular neck profiles.

But don't fret, we're not talking baseball bat chunky here. Most guitarists will find the extra meat easy to adjust to. As fat neck advocates such as Zakk Wylde and Jeff Beck will tell you, more girth reaps greater tone.

Before we move on, we should mention the 22 jumbo frets, the large-button die-cast tuners and the chunky bridge included with the SE. The latter is the classic PRS wrap-around combined bridge/tailpiece, in this case with six individual string saddles that provide you with accurate intonation adjustment.

The bridge humbucker that  Mr Robertson has spec'd for his signature SE is a bit special. Christened the 57/08, it's exactly the same 'bucker fitted to those three-grand US PRS models that their owners are so terrified they're going to scratch. Anyway, the story goes that PRS bought the original pickup winding machines - and the same type of wire - that Gibson used in the late 50s to create its legendary PAF (Patent Applied For) humbuckers. The 57/08 pickup is the result of that investment, a sweet-sounding vintage spec 'bucker.

Like its P-90 neighbour, the 57/08 is routed through its own volume and tone control, and a three-way pickup selector toggle switch, but the bridge pickup also features a coil tap, activated by pulling up on its tone knob.

The 57/08 is the balls. It's bright and punchy without being shrill. Given Robertson's day job, you'd expect this pickup to work well with overdrive and distortion. Consider both boxes ticked. It's equally at home referencing classic-rock tones such as Led Zeppelin, Allman Brothers Band and the like, and heavier gear like, well, Black Stone Cherry.

The coil tap adds some very subtle versatility, but then the difference in output between a PAF-style humbucker and single coil is never as much as you expect.

We know what you're thinking. If the bridge pickup is so damn good, why would you chisel an SE Soapbar (aka a P-90) into the neck position, and not another 57/08? Well, the single-coil P-90 gives you much of the tonal grunt and fatness of a humbucker but with more clarity. That means you get greater note separation than you would achieve from most humbuckers, even with the gain cranked up.

As expected, with a clean sound, the Soapbar is warm and woody-sounding. Add a little overdrive and it's perfect for blues licks,with a sweet tone that'll keep you busy beyond the 12th fret. Kick in your fuzz tone and some Jack White-style garage blues reveals itself, spitting out harmonics with bags of sustain, no doubt enhanced by that chubby neck.

The SE Chris Robertson is a first class bit of kit - and so it bloody should be with a suggested retail price of £995. That price does include a chocolate brown padded gigbag with accessory pockets, shoulder straps and a couple of neatly stitched logos, however, and unless you're the world's least savvy shopper, you'll take home this SE model for a street price of around £850.