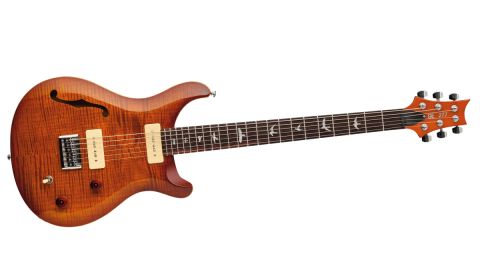 The PRS SE 277 is a classy proposition, fantastically playable and looks superb.

PRS has a history with baritones.

Its SE model for Staind man Mike Mushok became a cult classic, and has become much sought-after since its discontinuation. This semi is the tamer of the two new SE 277 models, the other of which is a twin-humbucker solidbody.

The 277 semi is a handsome beast, featuring that classic PRS silhouette with a flame maple veneer. ThePRS bridge is a tidy string-through construction that's not only comfortable on the palm but anchors the guitar with a sense of stability.

The 277 refers to its 27.7-inch scale length, and in terms of playability, it's easy to get to grips with, as a provider of low-end grunt and rhythm that also waves you on to the top of the fretboard.

While the PRS SE Soapbar P-90s mean the 277 isn't as tonally versatile as, say, a Danelectro, there's still a dynamism to it. The bridge pickup has plenty of pugnacious snap with clean tones, and harmonic response when the gain is dialled in.

Though the neck pickup takes a little of that trebly edge off, there's still plenty of chime, in what is a classically voiced baritone that's great fun to play.

If a Danelectro '56 is the guitar you might lend to your mate in that weird Ramones cover band, and a Hagstrom Viking Deluxe confounds expectations of what a sedate, semi-hollow can sound like, then this PRS SE 277 Semi-Hollow Soapbar is the one you'd take home to meet the parents...