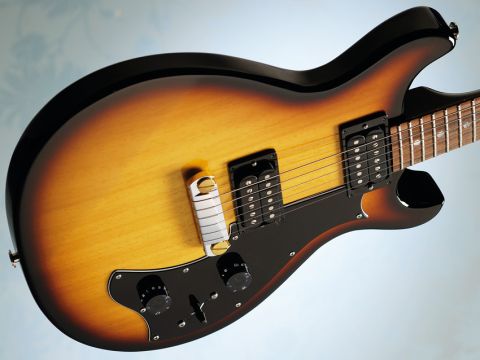 The most affordable USA-made PRS is quite a departure sound-wise - definitely one to try before you buy!

The 25-inch scale, 24-fret all-mahogany Mira kick-started the change, although the subsequent Mira Maple Top restored some bling. PRS got back on track with the Bigsby-equipped, 24.5-inch scale, 22-fret Starla (soon to be available with tune-o-matic and stud tailpiece) and in early 2009 unveiled the Mira X, which shares the Starla's scale and fret compliment.

The Mira X is the most affordable USA model to date and could well have a 'street' price more like £1,000. But in order to achieve this lower price, savings had to be made. The first concern is the woods used for its construction.

PRS says the body is African Basswood, except it isn't: it's a lighter weight wood called obeche (also known as wawa and samba, apparently).

"It's not regular basswood," confirms Paul Reed Smith. "Look, korina isn't really korina, it's African limba wood, but because no one liked that name they re-named it korina.

It's the lightest PRS solidbody guitar this writer has ever held. In fact, it's one of the lightest solidbody electrics we've ever encountered, period.

While sharing the same slightly altered PRS outline and depth (42mm) as the Mira, it doesn't have that guitar's subtle top contouring. It's virtually a slab body with an angular and light forearm contour and a more regular PRS-like belly-cut.

The neck, only available with the usual wide-fat profile, also uses a different wood. Instead of South American mahogany, this is something called sipo (also known as utile).

"Sipo is close to sapele, a sort of African mahogany," says Smith. "They're all closely related and we really like it. We like it so much we've considered using it on other models. It's musical, strong - it's good stuff."

"I know that they use it in a lot of window making and stuff like that, because it's very stable," chimes in Smith's right-hand man, Joe Knaggs.

The fingerboard too, with just pearloid dots and no moons or birds in sight, looks like a pale rosewood with attractive darker lengthways striping, but it's pau ferro - a more regular fingerboard wood and one that Smith believes is in "the same family of tone as Brazilian and East Indian rosewood."

It seems as if PRS is trying new things - out of necessity? "We are experimenting and we're learning a lot, but we're not experimenting on the market - we're trying it out as guitar makers before we hit the go button.

Tuners are the now familiar brass-post, vintage-style, non-locking types, married with an unplated aluminium stop-tail bridge, with contrasting unplated brass posts adding to the workmanlike vibe of the guitar.

The electrics are all scratchplate-mounted on a Mira-like black/white/black plastic plate and, along with master volume (with treble bleed capacitor) and tone, with standard black speed knobs, the two pickups are controlled by a three-way lever switch. Unlike the Mira, there's no coil-split switch and the pickups themselves don't have that extra conductor to split them.

Called Mira X humbuckers (early pickups have a 245 sticker on them with a large red X inked on the baseplate) they appear identical to the open-coiled units used on the Mira - aka Mira humbuckers, which are actually 245 humbuckers without covers.

Still with us? These are basically the same, based on the uncovered 245 but with a different magnet: "You should hear more high-end and bass," says Smith.

Here are sound clips of each of the guitar's three pickup positions, beginning with the bridge and moving through to the middle and neck positions:

The light weight (but without an unbalanced strapped-on feel), great neck, bold and loud resonant acoustic tone combined with easy, slick playability is hugely endearing even before we plug in. But fired up through our test amps, and compared with a Mira, we hear a rather different sounding PRS guitar.

Whereas the all-mahogany Mira just sounds instantly 'right' in a classic humbucker sense, the Mira X sounds ever so slightly hotter, with a roomier low-end, softer squashier mids and a crystalline, papery high-end that, depending on your amp and its settings, can sound a little too harsh.

Certainly with cleaner amp sounds, a little tone control roll-off is necessary on the bridge pickup and, perhaps surprisingly, there's a treble bleed cap on the volume. It might sound better without, as volume reductions would in theory slightly round out the high-end.

Even the neck pickup has plenty of crispy highs although, again on a clean-to-crunch sound, there's more of a hot-rod Fender-y character, or perhaps a P-90 sizzle.

Certainly as we up the gain, the Mira X begins to show its colours, but the Mira fights it all the time and it is only when we wind up the drive channel on our H&K Statesman and dial in plenty of gain that the Mira X, to our ears, outperforms it with a more contemporary metal-type sound offering plenty of articulation, deep thumping low-end, less pronounced mids and some squeal from the bridge pickup.

But although it has a very different character to the Mira, with those darker squashier mids, the Mira X proves less of a one-trick pony over time, and that's primarily down to the extraordinary resonance - almost acoustic-like - that for mid- and classic-gained sounds, especially with effects, proved very appealing.

There's also a little a P-90 sizzle here, and although it takes time to find its sounds - beyond the obvious - it's the sheer ease of playability that keeps us at it when lesser guitars might have been put back in their cases.

With its different woods, style and price-point, the Mira X is easily the most challenging 'mid-price' PRS to date. There are no neck or bird inlay options for starters, only three colours and we don't get a coil-split (and can't even add one ourselves), it's definitely a case of what you see is what you get.

We have some misgivings about its sound - it's certainly less classic and versatile than the Mira, and seems happiest with modern-gained sounds, yet the guitar's style hardly reflects that market.

But as an entry point into the world of PRS it has plenty of charm. It plays beautifully, stays and sounds very in tune and shows off the brand's fabulous build quality and innate understanding of acoustic resonance, but in a package that says 'scruffy oik' instead of 'well-heeled professional'. A glimpse of PRS's future perhaps?