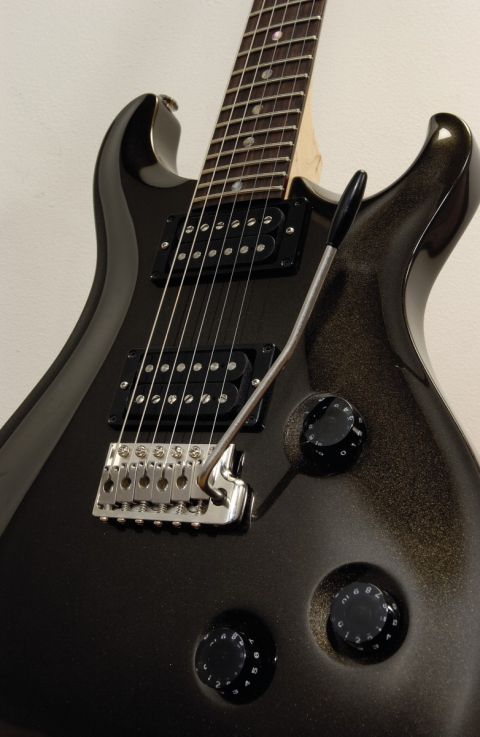 The CE is simply one kick-ass rock 'n' roll guitar. Welcome back!

The CE Maple Top was launched in 1989 and 22-fret versions were introduced in 1994. The CE's body/ back wood changed from alder to mahogany in 1995 and the non-maple topped CE disappeared from the line in 2000. Why?

"Although I really like the instrument, we weren't selling very many - they weren't selling through at the stores at a rate that was comfortable for everyone," is PRS's honest reply. The reason it's back is just as pragmatic: "because there seems to be a demand again."

Effectively a bolt-on Standard 24, the CE Mahogany 24 definitely falls into the player's category. It's a plain Jane but that's the appeal.

Without a maple top, and with its opaque finish, there's purity to the lines of the PRS body that isn't dissipated by fancy wood grain.

But the CE Mahogany's return brings new technology to the table in terms of the four 'Hot Hues' colours (offered along with 12 more standard opaques and 'bursts) developed by DuPont for the hot-rod market.

"It is actually a complete finish system, but we are just using the colour, not the clear," relates PRS President Jack Higgenbotham.

"It is more user-friendly than any other metallic colour we've ever sprayed. We were so impressed that we brought back the CE Mahogany guitar offered, primarily, in the Hot Hues colours."

Our sample is 'cappuccino', a sort of deep coffee-coloured metallic and not the brightest or flashiest of the new Hues, but about the classiest brown we've ever seen on an electric guitar.

There's no faux edge 'binding'. A single piece of maple - finished in nitro-cellulose - is used for the neck (with additional headstock widening 'wings'). It's held to the body by four screws and an engraved neck plate that also bears the serial number.

The neck fits into the body exactly as a glued-neck PRS - it's the fixing that's the only constructional change.

Only the wide-thin neck profile is offered but it's another very cool profile, slightly thinner in depth than the wide-fat creating considerably less bulk for your left-hand without it feeling skinny.

The hardware, including the state of the art vibrato/locking tuner system, is identical to the set-neck instruments, as are the electronics.

Like the Standard and Custom, the CE utilises a different pickup combination depending on whether you choose a 22- or 24-fret neck. The 22-fretters use covered Dragon II humbuckers, the 24-fret models use the HFS Treble/ Vintage Bass combination.

The dual humbucking combo is linked up to a five-way rotary selector (see options), master volume and master tone. Importantly, the set-up is bang on straight out of the box, as is the stability of the vibrato.

Light in weight with a beautiful balance and bright-edged acoustic resonance - enhanced by the vibrato - the CE dishes up some very usable sounds from the five-way rotary switch.

And all with a little more Fender-like snap than, for example, a Standard 24. With the switch rotated fully clockwise, coinciding with the number 10 on the control knob, we get the HFS Treble.

It doesn't produce the low-end girth of a Les Paul or Singlecut but you do get a powerful mid-focus that just wants to grind. It's a contemporary sound that works as well for medium crunch tones as it does for high-gain rock and metal.

There's always good balance between bridge and neck and here the Vintage Bass (fully anticlockwise, number six) turns in a classic performance: darker but not dull, with a little more rounded high end than, for example, a Custom 24.

With the knob in positions nine and seven you get the two parallel single-coil mixes: two outer screw coils, and two inner slug coils respectively.

They obviously aim to emulate a Strat's mixed positions in darker (nine) and brighter (seven) flavours. But it's not the accuracy that concerns us; in the context of this guitar they simply provide two very good funky, percussive single-coil tones.

The centre position on the five-way (number eight) gives the two inner coils in series and creates a fatter and darker sound halfway between humbucker and single-coil: a neat hot single-coil lead tone or a more lo-fi rhythm sound, ideal with medium gain.

PRS's experience means we have a really smooth volume taper that is brilliant for violin effects, but experiment and you'll find still more colours: knock it back for the parallel mixes or for a jazzier neck pickup tone; slam it full up for lead humbucker tones.

The only downside is that with the standard barrel knob, changing the switch positions - especially live 'n' sweaty - isn't the fastest. Maybe it's time for PRS to switch over to the new 'lampshade' knobs that we've seen on the 513?