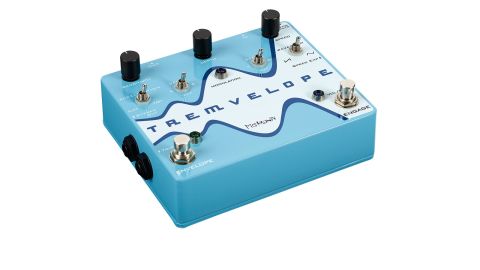 An extra layer of nuanced expression makes this a tremolo pedal with a difference - dynamic control.

The Pigtronix Tremvelope can be used conventionally, but its standout feature is a switchable envelope follower that lets you control the speed and depth of the effect with your playing dynamics.

As a basic tremolo, you get a choice of two waveforms - a sine wave and a ramp (sawtooth) wave with controls to set the speed and depth.

A sensitivity knob determines how the tremolo changes in response to picking dynamics and there are several options as to how it changes the tremolo.

Speed and depth both have three-way switches to determine whether they speed up, slow down or don't react to the triggered envelope, while a third selects whether the speed of acceleration/deceleration is slow or fast.

More versatility is available via expression pedal and trigger inputs. Once you've set it up, having your picking alter the tremolo creates interesting and musical shading for song parts.