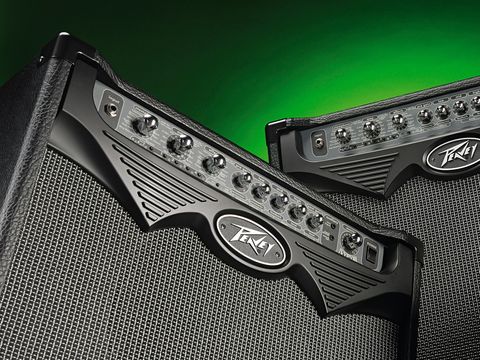 Easily up there with the best digital modelling amps. Certain to be popular.

With great gusto and a reported $10m investment, Peavey introduces Vypyr: a huge, size-11 step into the world of digital modelling guitar amplification.

You might argue that the big P is a bit late to the game, but having partnered with Damage Control in 2007 - a company that was set up by ex-Line 6 personnel - Peavey found it suddenly had access to a mine of modelling know-how. Married with the Meridian giant's considerable experience in the traditional amp market, it was surely the obvious way forward.

The new Vypyr range is comprehensive, and here, our attention is turned to the 1x12 30-watt model, although the range encompasses everything from a 15-watt model right up to the 120 Tube version equipped with a valve power amp.

The Vypyr 30's cabinet is particle board and almost totally open-backed which, without any valves dangling down and a very space-efficient steel chassis to house the electronics, makes it all feel very sparse. The upside is that carrying it is a doddle - it's very light.

Stylistically, Peavey has gone for shaped a plastic panel on the speaker grille that says 'bat' more than 'snake' to us. In any case, it's distinctive and fits well with Hartley Peavey's spiky logo - probably the most recognised brand in all of the gigging and performing world.

So far so expected for a mass-produced Far Eastern amp, but what's really interesting is on the inside, as Peavey is claiming twice the processing power of its nearest rivals. The 32-bit floating-point SHARC processors take care of the digital side of things, leaving much of the distortion duties to analogue circuitry.

On power up, the LED position markers on every pot dance around like an amp possessed - Peavey is quick to point out this has no practical application other than letting you know it's on and, more importantly, attracting people to the Vypyr's charms in music stores.

As soon as you plug in, it all stops and you can get down to WYSIWYG business. You can disable the light show if it annoys you, but we like it.

Accessing them is a doddle: simply turn the amp 'encoder' as Peavey calls it (we'll stick with knob, eh?) to the model you require and push it to toggle between clean (green LED) and dirty (red LED) modes.

Pushing and holding the amp knob fires up the onboard chromatic tuner: neat. The amp model LEDs tell you what note you're at, the effects knob LEDs go left and right for flat and sharp respectively, then all light up when you're on the money.

The effects knob offers 11 selections including chorus, tremolo and a nice slapback echo; also a flanger, phaser, rotary speaker, octaver, envelope filter, reverse delay and the looper function (although you must have a Sanpera foot controller to use that).

Selecting effects is dead easy and you can edit the sounds by pushing the knob in. Once you're in edit mode, the pre-gain and low pots become the two most obvious parameters for your selected effect. So for example, if you have a tremolo effect selected, the editable parameters are speed and depth, just as they should be.

Reverb and delay also feature. In edit mode the mid and high pots give you control over delay time and repeats (there's also a tiny tap tempo function under the effects knob: excellent). The post-gain control adjusts reverb depth. Both effects are easy to use and sound good, if not exactly up there with '65 Twin Reverb or Fulltone Tube Tape Echo: you've no right to expect either at this price.

There are additional effects available via the stompboxes knob. These include modelled versions of a Tube Screamer-style overdrive, analogue flanger, phaser and octave generator, fuzz, compressor, ring modulator and more.

When selecting one, you're effectively putting a pedal in front of the amp. Editing the stompbox sounds is the same process as the effects, and once you get your head around that, accessing and setting up stompboxes, amp models and effects is quick and easy via the front panel alone.

You can then store up to 12 sounds, arranged in three banks of four, and select them via the mini switches under the amp knob. To save your own sounds, simply set them up on the amp, then press and hold one of the preset buttons, just like a car radio as Peavey helpfully points out.

You can use five effects together, including - as long as you've bought either the Sanpera I or II foot controller - wah or the onboard looper. The looper offers around 30 seconds of loop/record/overdub time, and enables you to change patches/ sounds while you're building loops: neat.

The Vypyr isn't designed to be used with other footswitches; instead the bespoke Sanperas enable you to store up to a whopping 400 sounds, and add expression pedal control for volume, wah and other parameters. The Sanpera II is the biggie with the fullest feature set, with two expression pedals.

We had the chance to use both at the official product launch. We were impressed with the ruggedness and functionality and, while none were supplied for review, we'd strongly recommend buying one with your Vypyr.

Other goodies include a speaker-simulated headphone out on a mini jack, and an aux in so you can plug your iPod/whatever in. Oh, and we should just mention that the master volume goes to 13. Well, it's three louder, isn't it?

Guitarist's Simon Bradley talks through a variety of the amp's sounds in the following video:

While the modelled sounds don't feel or react much like the amps on which they're based, the sounds themselves are very good from a listening perspective. The Dlx (Fender Deluxe) model sounds a little more middly and gainy than the Twn (Fender Twin) model for example; the Rec (Mesa Dual Rectifier) has a more cascaded heavy gain and slight mid-scoop compared with the Plxi (Marshall 'Plexi') model, as you'd expect.

To our ears the 6505 model is the pick of the high-gain models, perhaps not surprising as it's Peavey's number one rock son.

The best bit is that you can have all these sounds at micro-volumes. You can be Jimmy Page for a morning, while the neighbours are none the wiser - try doing that with a Marshall Super Lead stack! The 30 doesn't have the projection to get through a spirited drummer, but for backing track-based and quieter gigs it'll do fine.

The Vypyr 30 manages to hold on to its cleanest tones up to maximum volume, which can be an odd experience if you're used to natural break-up in an amp. If you want more break up, just select the next channel or model.

It's all here and it's to Peavey's credit that the quality of the Vypyr's light and medium-gain sounds are infinitely better than digital modelling's first serious attempts a decade or so ago. We should never take that for granted.

Like a lot of modelling amps that sound great at lower volumes, it's all too easy to overdo the bottom-end at medium and higher levels. There's tons of bass so you need to dial a lot of it out to avoid a big woofy mess at performance levels, especially with high gain sounds.

And in that respect, ultimate, maximum gain metal does lose tightness and note definition at performance volumes, but it'd be a bit much to expect anything more of the totally open-backed cabinet and modest power rating on offer here.

The Vypyr's effects, both stompboxes and post-preamp effects, are generally excellent. A good start point is to try approximating famous tones, so selecting Analog Phase and the red Plxi channel (or 6505 for that matter), for example, puts you immediately in Van Halen mood.

In that respect the world is your sonic oyster: whether it's Andy Summers-style delay and modulation, a bit of SRV rotary speaker, sixties surf shimmers or full-on Zakk Wylde shred, the Vypyr does the lot.

Whether the TubeScrm model, for example, sounds or feels ultimately like a good Ibanez TS-9 or 808 is academic. What it does is give a swathe of mid-rich, sustaining drive that you'd associate with a TS-style sound. That instantly right-ballpark factor is true of all the effects on offer.

The XR Wild and X Boost stompbox models are well worth a demo, adding lots of aggression and lively boosted amp feel to proceedings and here, with a medium-gain amp model and a decent guitar, the Vypyr starts to breath a little more, feeling at its most responsive and natural under your fingers.

And just try not grinning when playing psyched-out weirdness with the reverse delay, or doubled parts using the octaver: hours of fun.

Any guitar amp that really gets the juices flowing among players usually has a heart of hot glass. We're not sure any digital amp has much heart to speak of, but they do have a colossal, Tefal-sized brain that's infinitely more use for jamming, practice and all-round fun.

This reviewer would choose a Vypyr 30 for home use over, say, a Matchless DC-30 any day. The amp models give a good flavour of their inspirations as do the effects, and they're all dead easy to access. Value? The effects alone, if you bought separate pedals, would run to thousands.

Better than a Line 6 Spider? Well, Peavey may claim better technology and there are certainly more modelled sounds in the Vypyr, but it'd be a brave person who'd say with confidence that there's much in it tonally.

Like the other modelling amps out there - and whatever any of the companies claim - there's still a big gulf in feel, dynamics and projection compared with a quality valve amp for live use. Yet as a practice, rehearsal, home recording and learning-about-sounds tool, you can't go wrong. Tons of good sounds, very affordable. What's not to like?