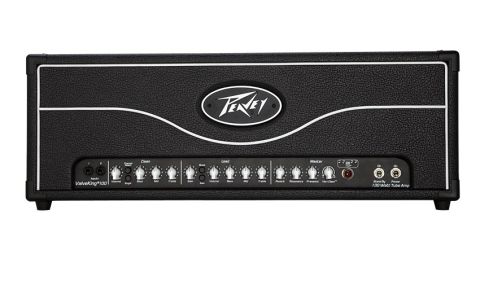 Big and beefy it may be, but the extended feature set makes it highly versatile. We like those 6L6s, too.

One of the biggest musical instrument and pro audio manufacturers in the world, Peavey knows a thing or two about building great guitar amplifiers at all areas of the spectrum. Sitting in the middle of this expansive product range is the popular ValveKing line, which combines made-in-China pricing with boutique features and Peavey's customary reliability. Nine years or so since the originals were launched, Peavey has recently rebooted the entire range with new cosmetics and a raft of features that merit a closer look. Let's dive in.

The first impression is often the one that counts, and Peavey has given the new ValveKing a styling makeover with white chicken-head knobs, textured black vinyl, white piping and a smart updated badge to replace the screen-printed logo of the original. While the first ValveKing 100 didn't look bad, the fit and finish wasn't so great. However, the new model is a substantial improvement, and looks much more desirable.

The electronics are well up to Peavey's typically high standards, too, with most of the components held on one large through-plated printed circuit board, including the valve bases, with a second, vertically-mounted board for the rear-panel components.

There's quite a lot of internal wiring, most of it terminated with heavy-duty spade connectors, with AC-carrying conductors twisted to reduce hum. It's a pretty cramped layout with a lot going on - the main board carries valves, conventional resistors and capacitors as well as miniature surface-mount chips and daughter packages such as the digital reverb, which comes courtesy of Accutronics.

Despite this, everything has been routed neatly, which, combined with the high component quality, gives the ValveKing 100 head an overall impression of craftsmanship and reliability.

This is a proper two-channel design and, as the flagship model, this 100-watt head has the most bells and whistles of the range, with high- and low-sensitivity input jacks, independent three-band EQ (except on the Micro head), a bright switch on the clean channel and a boost switch on the overdrive channel that can be set to alter gain or volume.

In the master section, you'll find controls for presence and resonance, which govern the output stage's frequency response, along with a level control for the built-in digital reverb and Peavey's clever variable class control, which progressively removes one half of the valve output stage, simultaneously increasing the gain of the driver valve and varying the harmonic content. Moving into Class A mode reduces full power to around 40 watts, with a sweeter, fatter tone as even-order harmonics are added.

Round the back, there are plenty of very usable features, including dual speaker outlets with switchable impedance, a three-stage output power control switch, a microphone-simulated direct XLR jack with ground lift and speaker defeat, a footswitchable series effects loop, and separate footswitch jacks for channel/boost and loop/reverb functions.

There's also a USB recording output for direct connection to your computer and Peavey's Tube Status Indicator - a group of small LEDs near the mains-indicator light, which are the visual end of a monitoring circuit that watches the output valves' performance and can switch them off if needed. All the user sees is a simple visual cue - green is okay and on; red is off/standby or not working.

All things considered, then, this amp looks good, packs in plenty of usable features and is built sturdily enough to survive a heavy gig schedule.

The ValveKing 100 is largely noise-free in operation, which makes it useful for home practice and recording, as well as live work.

The clean channel is quite neutral and warm-sounding, with a bright switch to add snap to mid-biased humbuckers, if needed. We tried out the ValveKing 100 head with a range of different instruments, including a Seymour Duncan Alnico Pro-loaded Strat and a PAF-equipped Les Paul Standard, both of which sounded equally sweet and full of character.

There's plenty of gain available on the lead channel, even before you activate the boost. The overdrive is smooth and American-flavoured, but with enough bite to get your point across.

Overall, we like the decent headroom, warm bottom end and glassy treble of this 6L6-equipped amp. The Vari-Class control has a dramatic effect on the amp's character without changing its core tone, sweetening the high end and compressing the dynamic range, while affecting the clean headroom as you move anti-clockwise into Class A mode. Generally, we discovered our preferred sounds were found with this control set somewhere between 12 o'clock and 3 o'clock.

If anything, this amp is slightly over-gained - while this may be a good thing if you're into lots of distortion and screaming leads, the more subtle bluesy tones are relegated to the first quarter of the gain control's travel, offering less range for these sounds than we'd like. We'd also have preferred a warm hall or plate reverb to the rather splattery digital spring - much easier on the ear, and far more versatile.

The ValveKing's other features work very effectively - the microphone-simulated DI is a piece of cake to use, and any decent FOH engineer will get a good sound from this in seconds. We're glad that Peavey has included a ground lift - it's essential, as more often than not such outputs cause ground loops and it's not easy to remove the hum if you don't have a ground-lift switch.

The USB output also uses the MSDI filtering, and it provided a decent tone into our PC without the need for any special drivers - it was recognised as a generic USB audio device and quite quickly installed itself. Meanwhile, the built-in attenuator works effectively to reduce power without affecting dynamics too much.

When an amp such as the ValveKing gets rebooted after nearly a decade of success, there's always a degree of anticipation - you hope that the stuff that was right to start off with is kept, and only the less-than-perfect bits are improved.

Thankfully, that's mostly true for the ValveKing 100 head - the reverb can be replaced if you don't like it, and while the high level of gain and overdrive will please many, those after more subtle boutique tones from the overdrive channel could easily tame it with a good NOS 5751 to replace the stock 12AX7 in the V1 position.

Don't look down at the Chinese origin, the tonal quality is superb - and puts many a USA or European product to shame. Yes, the cabinets are mostly particle board rather than ply, but it's encouraging to know that the money has been spent where it needs to be: inside the chassis, the electronics are top-notch.

The ValveKing range is about getting boutique features and sounds on a budget, and this amp is priced to sell in the most competitive sector of the market, aimed squarely at the younger players, weekend warriors and dedicated amateur home users who make up the bulk of the amp-buying population.

There are some great products vying for your cash in this bracket, of course, but this ValveKings is going to make life harder for many of them - with superior looks, features and tone that are not going to be easy to beat. Long live the 'King!