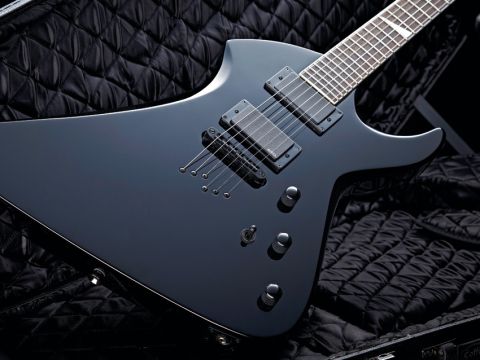 This is a very cool guitar that not only suits heavier styles perfectly, but many more besides. The metal is still going strong…

The acronym PXD stands for Peavey Xtreme Design, and the range as a whole includes nine all-out metal guitars at varying price points with a further six to come - all sport active ceramic-based pickups and a number of eye-popping designs.

The Void Series comprises a trio of incrementally priced models that each possess the same body shape and range of four finishes. The Void I comes loaded with two Peavey VFL active humbuckers, and the III with an aluminium body plate and a Kahler X-Trem vibrato.

Although there's an increasing choice of high output metal pickups available - take Seymour Duncan's Blackout set and the ear-busting Bare Knuckle Warpig for starters - mid-priced PXDs are loaded with EMGs, specifically an 81/60 set. In addition this Void II is fitted with the EMG Afterburner, a circuit activated by a push/pull pot that adds up to 20dB of gain, the level of which can be controlled with the same pot.

The body shape is essentially a smoothed-off Explorer with a Florentine cutaway that's even more expansive than the one found on the Ibanez JEM. It's fashioned from a three-ply horizontal spread of mahogany and features a black tune-o-matic bridge with through-body stringing.

Another global feature of the PXD ranges is the outlandish three-a-side headstock that features a clever ambigram [it can be read from more than one angle - Linguistic Ed] PXD logo, six snazzy tuners and even a small area on the front face that's been scraped back to the mahogany. The nut's been cut a little too untidily for full marks, but it'll be easily sorted out by a good dealer.

It's a very playable neck too, providing a flat and shallow 'D' profile along with a comfy low action, and the guitar is nicely balanced when played either seated or strapped on.

Acoustically the guitar isn't quite as resonant as we'd initially assumed, but when plugged in it's a whole different ballgame. The suitability of a mahogany/EMG combination for metal tones is well documented and, as such, the Void's bridge-loaded EMG-81 is brash and full, while the 60 is smoother yet certainly aggressive enough.

With a high gain metal tone, the Afterburner doesn't add any discernible volume as the signal hike further compresses the tone. What it does do, however, is fully unleash the harmonics and, at full whack on the bridge pickup, the tone instantly transforms you into a pinched-harmonic monster a la Zakk Wylde: the enhanced edge makes complex Trivium-style riffs clearer too.

By its very nature the Afterburner is extremely noisy as it exacerbates mains and amp hiss but, when used with the neck EMG, the boost gives that pickup's inherent roundness a high-end kick to provide a genuinely unusual tone. It's a cross between Iommi's soupy rhythm and Hetfield's more focused roar, and is well worth experimenting with, especially for huge, down-tuned riffs.

Of course, the PXD can do more than high-gain metal, and winding down the amp's wick does enable the Afterburner to alter the tone more drastically. Remember that you can alter the level of boost via the pot, and finding a balance between a rhythm and boosted lead tone significantly increases the guitar's versatility.

Cleanly it's excellent too and the only niggle we have overall is that the Afterburner would be even easier to use with a push/push pot.

For metal players, the breadth of tones, sleek neck and dark looks tick just about every box, and, if you're prepared to spend a little time experimenting with your amp settings, the Afterburner enables the Void to truly blossom into many different areas. This is one impressive instrument.