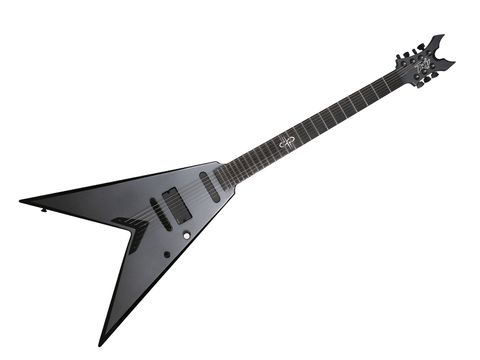 If you really need a baritone seven-string as well as a throwing/bludgeon weapon, this simply has to be at the top of your list.

There are times when you just need an instrument that, through the right amplifier, will double up as an internal organ 'disorganiser' and a suitable weapon to wield when the zombie apocalypse comes upon us.

At least that's what Peavey must be banking on with the release of the Devin Townsend signature model PXD Vicious.

The first thing to catch your eye is the sheer scale of the custom coffin case the guitar comes in. It's huge. So large, in fact, that should you die in a bizarre bacon-slicer incident your family could save a considerable sum on the casket. Once the PXD Vicious Devin Townsend is revealed, though, you can't help but get excited.

The guitar is a modified V profile with the usual 'mutant insectoid claw' headstock found on other PXD models. A shrinking violet it surely isn't, but if you're familiar with the musical excursions of Mr Townsend this won't surprise you.

Specs-wise, it's quite a classy formula. A maple through-neck is joined to mahogany wings and then given a maple cap and an ebony 'board loaded with 24 jumbo frets.

Hardware is fairly simple, with an EMG 81 7 humbucker in the bridge and SA 7 singlecoil in the neck, one volume control, a three-way toggle switch and string-through-body tune-o-matic-style bridge anchoring. All fairly standard stuff, although the locking Sperzel tuners make a nice concession to ease of use.

Before you think of plugging in, though, you have to get used to the 28-inch 'baritone' scale length, and Peavey makes this a little tougher by setting the guitar up for standard B tuning (rather than the A tuning we'd expect). It's a short adjustment to make, but we'd have liked to see the guitar set up for baritone tuning from the get-go.

The DT PXD isn't the most 'alive' instrument we've ever played, but once you plug it in there's no doubt you are about to lay the smack down. The neck pickup does allow for some reasonable clean tones, but let's not mess about - this guitar ain't about clean.

It's time to drop the guitar a whole step, tune the seventh string down another step and prepare for some drop G carnage. And, boy, do you get it.

The scale length keeps the lowest string from flapping, allowing you to literally be consumed with low-end insanity. The EMG 81 7 keeps everything as tight as possible; you can djent to your heart's content.

This model works best with more 'processed' tones, but considering whose guitar it is, that should be a given.

The DT PXD is an outrageously specific guitar. A seven-string, baritone pointy V? It doesn't get much more metal than this.