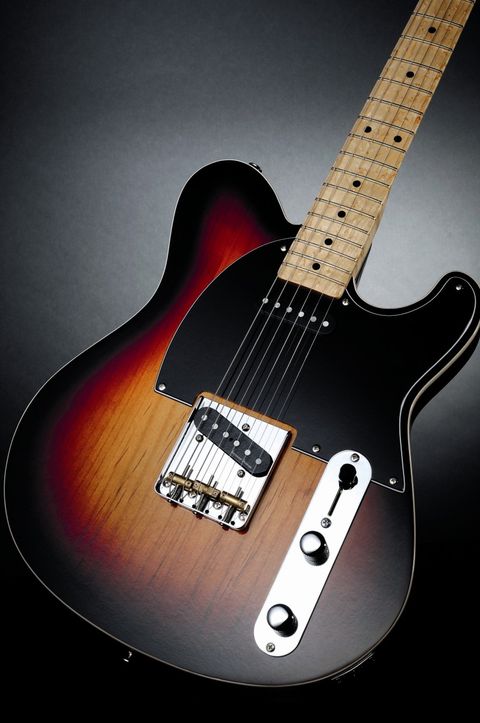 We're going to stick our necks out and say that this Omniac surpasses the Telecaster in certain areas. It's priced the same as Fender's Deluxe Ash Tele but proves itself to be an even better player.

Called "the string-bending king of the planet" by Danny Gatton, Jerry Donahue is not only well-known for his scary chops but also as a past Fender endorsee - we believe he holds the unique distinction of being the only artist to have had both Strat and Tele signature models.

His signature Telecaster appeared in 1994 and was followed in 1997 by a Japanese model: the Fender 'Hellecasters' Ltd Edition Jerry Donahue Strat - surely one of the longest names in the history of the guitar!

Both models included some tricky Strat/Tele hybrid wiring, the 1997 Strat offering a unique A/B rotary switch instead of a centre tone control which enabled you to use either standard Fender Strat wiring (albeit with the special design Tele-voiced bridge pickup) or a custom circuit designed by Seymour Duncan, to go with a trio of custom-design single-coils.

Now onto Jerry Donahue's new Peavey Te... No! We mean Peavey Omniac. Let's get one thing straight: Jerry hasn't designed a new Parker Fly here. The Omniac is based on Peavey's Generation model, itself closely modelled on Fender's Tele. But, as ever when Donahue is involved in the design, it's going to be interesting.

The first thing you notice when picking the guitar up is the gorgeous neck: it's easily the best neck to bear the Peavey logo since the introduction of the very first EVH Wolfgang back in 1996.

The quality of birds-eye maple is of a similarly high grade and it has been oil finished; in fact just the headstock's front face is coated in a clear finish. Jerry has opted for a soft 'V'-shape to the neck and, as with all of his previous guitars, the Omniac also features a hefty scallop behind the nut to allow him to perform those famously mind-blowing bends.

With a standard 648mm (25.5-inch) scale and 21 medium frets - slightly more substantial than those fitted to a Fender '52 Reissue, for example - you do feel that you're playing something familiar and the neck work is so good that the vibe is really more Fender Custom Shop Relic than American Vintage Series... and that's saying something.

Actually there's a definite Music Man vibe, too, brought on both by the oil-finished neck and the passing resemblance the slab ash body has to that company's Axis models.

Overall build is equally high but subtle changes are made to the generic-style hardware. For example, we get a classic vintage-style Tele bridge plate with a trio of brass saddles - the central one of which is intonated - and we also have four chrome and two bronze rear-mounted ferrules, the latter designed to add sustain to the B and high E.

As for pickups, at the bridge we have a Seymour Duncan Jerry Donahue signature single-coil. "This is an updated stock-style bridge pickup," says Peavey, "with symmetrically staggered pole pieces for great string balance and a special wind for increased sustain. It captures that amazing gutsy lead sound found on the very best of those traditional two-pickup guitars."

At the neck is a standard-sized Strat-replacement pickup: a Duncan Alnico Pro II APS-2. The electrics aren't quite as involved as those of the 1997 JD Fender Strat but do give five very useable, yet different, tones controlled by a five-way lever selector switch.

In Peavey parlance, position five, "voices the neck pickup and yields the rich, sparkling tone of the traditional three-pickup guitar. The result: that unmistakable single-coil sound that echoes the soaring, majestic blues tones of the sixties and seventies."

Position four again voices the neck pickup but with "a special capacitor engaged", creating the sort of sound you'd hear from "a full-body jazz guitar", and is "also great for the classic woman tone".

In position three the neck and bridge pickups are in a customised parallel wiring, producing an enhanced, more contemporary version of the customary middle-position timbre on the classic two-pickup guitar.

Position two again combines both pickups but, "with a capacitor and resistor in a controlled degree of reversed phase. This position offers the popular 'in-between quack tone' found on three-pickup guitars." Position one voices just the bridge pickup - no tricks.

Now, it's always good to have some kind of switching jiggery pokery that gives access to expanded sound options from your single-coil pickups. Fender's S-1 system does the series/parallel thing successfully on its American Deluxe Series Telecaster, but with the Peavey Omniac you're offered a combination of conventional sounds that go beyond that, using resistors and caps and upping the versatility stakes still further.

The bridge pickup certainly captures a wonderfully old school vibrant and trebly twang that's the cornerstone of so many genres. Position two is very similar indeed to a Tele's central position - all glassy mids and transparent lows - and, when compared with position three's much fuller, rounded tone, you do start to realise just how much is on offer here.

Clean, the guitar sings like Carreras on a hot date, but adding gain allows the loveable, warm tone provided by position four to give an almost SG-style neck pickup sustain: in fact the Peavey boast about this setting's 'woman tone' credentials prove to be true, albeit a somewhat lower-powered version.

All settings work very well with a nicely overdriving amplifier and the gamut of all T-style tones are present and accounted for, save perhaps that humbucker-driven grind enjoyed by hard rockers and metal fiends.

Donahue's technique is, at times, so astounding that it's actually fun to try to get close and, if you're able to execute double-stop multi-bends, the guitar comes out of the box perfectly set up to do so. Remember that he does use hybrid strings (an Ernie Ball set comprising an .010, .012, .017, .024, .032 and .042 sextet), but we were, thanks to the aforementioned behind-the-nut scallop, able to bend the G up a full two tones here. Though we're still learning...

It might have taken some time but Peavey and Jerry Donahue have come up with something a little special. So, would we say that this is the best non-Fender T-style electric currently available?

Yes, without doubt, and especially at this price. It's beautifully put together and is certainly tonally versatile. In fact, unless you absolutely have to have the Fender legend on your headstock, we'd wager it'll even attract the deserved attention of die-hard Telecaster fans. Very impressive.