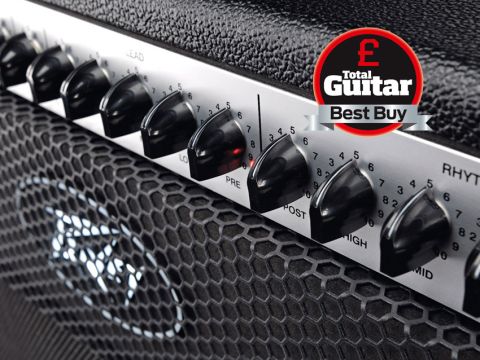 For those who want to play with true stadium-metal tones but on a smaller budget, this amp is perfect.

Peavey's artist roster is very well equipped: Trivium, Machine Head and Bullet For My Valentine are just three of the metal stadium-fillers on its roll call who have opted to use a wall of 6505+ stacks.

Thing is, the gigging reality for most of us is jostling for space with a pool table in the cramped corner of the local, while keeping one eye on the Ford 'tour bus'…

This amp manufacturer clearly empathises with our situation, stripping the guts of its genre-defining 6505+ head and placing them in a cabinet with a 12-inch Sheffield speaker. The combo has the same two-channel/ three-mode design as the head, but you lose a 12AX7 preamp valve and a pair of 6L6GL output valves.

Two additions to the combo version, though, are the Accutronics spring reverb and Peavey's MSDI speaker-simulated direct output (handy for recording or feeding to a PA system for bigger gigs).

In short, it's lighter, smaller and quieter than a half-stack, but begs the question: can you achieve a bowel-rattling metal tone from a 60-watt combo?

The amp's Rhythm channel defaults to a clean sound, but also has a Crunch switch that can up the gain a lot further than you'd expect. This lets you switch between clean and heavy rhythm sounds while leaving the next channel free for parts that require even more gain or volume.

The cleans aren't as crystal clear as the head version because of the drop in headroom, but this will only be a problem if you obsess over razor-sharp clean tones at the loudest volumes.

Switch to the Lead channel and you're reminded what all the fuss is about. You'll find more gain than you're likely to need, from mid-rich, high-gain hardcore, to tight, slightly scooped death metal.

When we looked at the 6505+ head, we said the 4x12-inch cab sounded a little flabby. The combo restricts this by cutting the sometimes overbearing low end and allowing the mid and high range frequencies to cut through - a sure plus point for gigging in an un-mic'd situation.

Fledgling metallers who are yet to reach bigger venues will appreciate the portability and control that a 1x12-inch combo provides, and the direct output will come in handy if you're playing the occasional larger gig.

This said, it's a shame that there are no extension cabs short of a 4x12-inch. At this price, there is competition that's better suited to a wider range of tones, but few others offer anything directed so squarely at high-gain punk, metal or hardcore sounds.