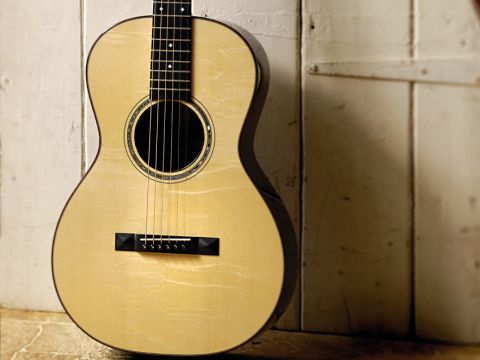 Patrick James Eggle is obsessed with guitars. Some 10,000 guitars and 30 years after he built his first one, Eggle is one of the few UK luthiers who enjoys an enviable reputation both at home and overseas.

His current acoustic range covers all the key bases (dreadnought, OM, jumbo and so on), with one noticeable exception - until recently, Eggle's catalogue was missing a parlour-shaped guitar.

As Eggle tells us, for years, customers would ask, "When are you going to build a parlour? And now that I've done it, I'm really excited about this guitar."

The lines and curves of a parlour are perhaps more 'old world'-looking than other body shapes. Evoking images of early Martin 0 and 00 guitars, the parlour remains essentially a vintage model.

Being a 12-fret guitar, the parlour's body appears long in form; a perception augmented by the ultra-tight waist. Due to their sweet, intricate tone and the finger-friendly characteristics of short scale, parlour guitars are particularly popular with fingerstyle players, though they're rarely a pure player's guitar.

Eggle himself admits that his target consumer is someone looking for a second, or even third, high-end guitar.

In terms of its dimensions, our review model measures just 207mm across the waist with a standard 102mm (four-inch) soundhole. Although the eye would try to tell you differently, our parlour is just 2mm shorter than a Martin OM-28, measuring 487mm tall.

At its widest, the parlour is a slender 342mm, which, to put that into perspective, is 54mm less than a D-18 and a whopping 77mm less than a Lowden jumbo! The smaller body inevitably reduces the guitar's mass and it tips the scales at just 1.7kgs.

These minimal dimensions and reduced weight result in an extremely comfortable guitar to play. In the seated position (which is where Eggle expects the parlour to be played as evidenced by the lack of any strap buttons) you can wrap yourself around the guitar and cradle it.

The playing position also brings your left hand much closer to the guitar's body, making fretboard orientation much easier than on larger, 14-fret guitars.

Our review model's soundboard is constructed from solid, book-matched Italian spruce, described by its maker as 'bearclaw'. Viewed from certain angles, the 'claw' scars give a quilted appearance.

This natural decoration provides a deep, layered appearance to the very simple, understated top. The only decorative indulgence being a soundhole rosette made from green paua shell, no less.

The parlour's back and sides are shaped from solid East Indian rosewood, which is full of texture and grain detail. The binding, as fitted to both the front and back of the guitar, is crafted from cocobolo (hand-picked by Eggle himself); a tropical hardwood found mostly in Central America and often used to make basses.

This same wood is also used for the heel cap and an elegant ring fitted to the inner edge of the soundhole - though it took alittle time before we spotted it!

The parlour's two-piece back is joined by an ornate strip of parquetry, which itself is in two pieces. This centre-strip is created by laminating layers of contrasting coloured woods, which are then cut at an angle and joined to form a pleasing herringbone pattern.

The one-piece mahogany neck is a slightly slimmed 'C' profile and feels as if it bears a matt finish. In reality, the neck sports exactly the same amount of UV-cured finish as the rest of the guitar, the neck just hasn't been buffed at all.

This clever technique is superior to what's sometimes referred to as an 'off the gun' finish that can, with time, result in pitting and an 'orange peel' look.

Due to their reduced size, parlour guitars can sometimes suffer from sounding 'boxy' and tight. In an effort to overcome this, Eggle has braced the parlour's top lighter.

You'd normally expect to find two bars behind the bridge (running in between the bottom half of the 'X') but our review model has only one.

Having less of the hand-split European spruce bracing thereby allows the top more room to vibrate and push air - a hugely significant factor in determining the resonance of a guitar.

Eggle personally tap- tests and hand flexes each braced top to ensure the perfect compromise between rigidity and flexibility is met.

As you'd expect for such a high-end guitar, high quality tonewoods are used throughout; our review model features cocobolo bridge pins, an ebony fingerboard, ebony pyramid-shaped bridge, a rosewood face to the slotted peghead, plus a bone nut and Graph Tech Tusq (bone substitute) saddle.

The tuners are side-mounted, open-geared Waverleys - a reliable choice for top-end acoustics such as this.

Uppermost in Patrick Eggle's reputation is his attention to detail and fastidious approach to the finish of every guitar. Rumour has it that near-perfect guitars are held back by Eggle who won't let a single instrument leave his workshop until complete perfection is achieved.

Some prospective purchasers have requested if 'factory seconds' are available only to be told that, while Eggle is in charge, there's no such thing.

Our review model only serves to underline the tremendously high standard of finish and quality control at Patrick James Eggle. Inspect as we may, we simply couldn't find anything to point a critical finger at.

Quite simply, it's hard to see how a guitar's finish and presentation could be bettered.

Based on our initial impressions of the guitar, its sound has a lot to live up to, but we aren't disappointed.

Though not having the volume of larger-bodied guitars, our review model is highly impressive in terms of its articulation and lucidity. Its mids and top end are carried with a striking amount of tonal depth, while the biggest surprise comes from the lower registers.

Played open or palm-muted, the bass is plump and rounded, offering itself high in the output and in no way appearing to suffer from being produced by a smaller body shape.

Strumming duties are handled capably, but in truth, fingerstyle is where this tonally versatile guitar excels.

Sheer physics dictate that parlour guitars are never going to have the presence, volume or full-fat bass we've come to expect from dreadnoughts and jumbos. A parlour's appeal lies in the potential sweetness of its tone.

As mentioned, unless well executed, with quality tonewoods employed, parlours can sound boxy and constrained. Interestingly Eggle comments: "It's not too difficult to get a dreadnought to sound right, but with a parlour, you're shooting through a smaller window."

We'd suggest that with his new parlours, Eggle has most definitely hit the target.