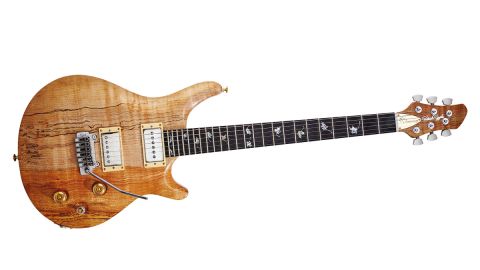 A timely reminder that the UK still has a diverse and vibrant range of mainly custom guitar makers that might just have your name on.

There has been a smattering of attempts to elevate the 'British guitar' onto a worldwide stage and Patrick Eggle came closer than most, certainly in the past 30 years.

The Berlin was originally designed by Patrick himself, although it would be many years after he'd left the company (in 1994) that he admitted to this writer that the design was squarely based on the PRS Custom.

It remains a sort of time-capsule design, especially in the guise of this 25th Anniversary model with its woody, organic proprietary 'silk' oil finish.

Slightly smaller than the PRS Custom, it feels and looks supermodel skeletal: 323mm (12.7 inches) across its lower bouts, with a thinner-than-PRS Custom thickness of 42mm. All the wood components are one-piece - the back and neck are mahogany, the top an old-stock spalted sycamore (or English maple), again contributing to a woody, craft appearance.

With such a thin body, there's little need for any contouring, although the top carve isn't quite as dished as we remember and its front - and especially its back - edges are barely radius'd.

Like PRS, the Berlin uses the 'halfway' 635mm (25-inch) scale, with 24 frets on an unbound ebony 'board with the posh- looking abalone 'falling maple leaf ' inlays. The neck continues the skeletal vibe: a comfortable, slightly flattened C with a depth that stays at 20mm at both the 1st and 12th frets.

Fretting is good with a quite chunky medium-jumbo wire and, as ever, with a small offset heel, access is dead easy right to the top fret. Like PRS, the three-a-side head allows straight string pull over the nut, but, here, we have a well-shaped volute behind the nut adding a little more wood to the thinnest part of the neck.

Sperzel locking tuners - still a seriously good design - are married to a modified Wilkinson VS100 vibrato with a custom- tooled machine-forged steel block and an easy fit push-in arm.

The nut material is exclusive to Eggle, a cast co-polymer that's apparently very crystalline. "A hard slippy material that doesn't stick," says the company. Controls are simple: master volume and tone - the latter with a coil-split pull switch for the custom-wound bridge humbucker - and a standard three-way toggle selector.

There's just room on the side for the metal football-shaped jack plate, engraved with the serial number and Made In England logo, while the Patrick Eggle script headstock logo is a raised gold-coloured plastic that matches the classy plastic truss-rod cover, pickup surrounds, generic speed knobs and muted gold-plated strap buttons.

The chrome and nickel plating of the tuners, pickup covers and vibrato might be jarring on some instruments, but to our eyes, they work nicely on this more custom-style platform.

At 3.3kg, it's hugely comfortable: a light weight that goes hand in hand with the design. The neck might be a little skinny for some - in both depth and width - but that's going to be personal preference; likewise, the fretwire, which almost seems too chunky for the relatively delicate feel. But once a new set of strings had settled in, there was nothing to bug us, so we just got on and played.

With a lively resonance, the neck pickup is very usable for cleaner-toned jazzier voices or, with gain, some very fusion-y sounds: it's nice and vocal. We have no complaints either with the juicy, but not over-powerful bridge 'bucker with its strong midrange, though it's not over- cooked. Split, yes, it's a little spiky in the highs - despite voicing the slug (not screw) coil - but the tone control smooths that out and creates a full-toned, funkier voice with little problem when mixed with the louder neck pickup.

A treble-bleed cap on the volume control keeps things crisp as you turn down and, as ever, if you use your volume and tone controls, there are plenty of shades here. A good performance.

Those of us who remember the original Eggle guitars will no doubt have a smile or two with this guitar. Yes, it's derivative, but it's a perfectly workable platform with some good sounds and, as we said, a very craft-style organic and woody vibe.

With its unusual top and these inlays, the price is steep: the majority of mainstream high-end brands offer similar, and in many cases sharper detailed, instruments for less, but in a more basic guise (see spec, right), it's pretty much in line with what you'd pay for a similar guitar from many UK makers.

It certainly has plenty of charm and comes across as a real labour of love for those of
us who value grass-roots guitar craft and want something different, something a little more personal.