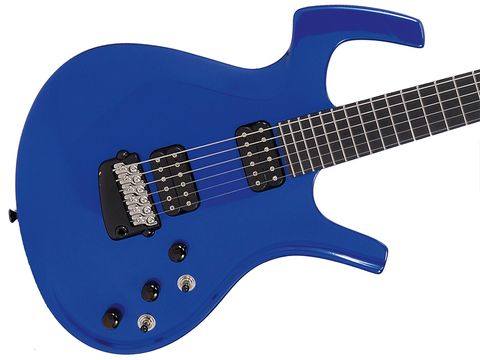 If you're prepared to put the time in, and you don't coil away at the thought of a radically-designed instrument, the Fly could surprise even the die-hard traditionalist.

From its birth in 1992, Ken Parker and Larry Fishman's Fly really did (and still does) evoke some extreme love it/ loathe it reactions. Combining both magnetic and piezo tones wasn't new - Hamer's DuoTone predates the Fly, as do other lesser known models - but the combination of this, the otherworldly outline and equally revolutionary construction was too much for many.

Although a few features have changed, the current Fly Deluxe stays pretty true to Ken Parker's vision. And what a vision it was. Not only did Parker design a radical-looking guitar, he conceived an equally radical method of construction.

With its minimalist six-in-a-line headstock, it's the thin angular horns that are the most eye-catching element. But the way these modern-looking forms meld into the offset lower bouts is beautiful - as is the substantial carving and contouring of the body.

While the base has a fairly conventional depth, as you move towards the neck the body thins out dramatically - and there's no neck heel. In this opaque finish - like the originals - the complex shape appears to be moulded. The guitar is, of course, made from wood: a basswood body and poplar neck (with thin wire truss rod).

The two components are mated with a complex finger-joint and the entire structure is strengthened by a thin epoxy, glass and carbon fibre composite 'exoskeleton' that covers the back of the body, neck and headstock. Finishing a guitar with so many complex curves caused Parker a nightmare and it looks like US Music Corp is having its own problems.

The frets are stainless steel - unheard of back in 1992, although a few makers now use this ultra hard-wearing material - and are glued, with a space-age adhesive, to the 'board. With its subtly conical fingerboard camber and a thin-depthed but quite wide 'C'-shaped neck profile, the Fly's playability is effortless: likewise the access to the top 24th fret.

It's a really lightweight guitar, balances superbly on a strap and almost melds itself to your body. A Les Paul it's not. The locking Sperzel tuners are the only parts not designed specifically for the Fly. The Parker vibrato bridge, which pivots on ball bearings, is unique to the Fly with its bolt-down, distinctively shaped stainless steel saddles that house the piezo elements.

Due to the thinness of the body a metal plate spring is used and overall height adjustment is accessed at the rear. Originally a visible balance wheel adjusted the tension of the spring - this is now done with a knurled knob on the back accessible through the large plastic cover-plate.

There's another nifty feature - the Step-Stop - also accessed through the coverplate. This allows the bridge to function as a standard vibrato (balanced mode), or as a down-bend only system.

If you tighten the balance wheel with the Step-Stop in the latter position it'll effectively fix the bridge so that as you bend one string the other won't go flat. Add in a stainless steel push-fit foam-tipped vibrato arm (with swing tension adjustment) and you have a wonderfully responsive system that will bend down to slack and up around five semi-tones on the G string. Tuning stability is excellent.

The thinness of the body means that regular humbuckers weren't possible to fit. Instead DiMarzio conceived custom-designed 'buckers that screw directly to the body without the need for springs and mounting rings. Originally the control system was more complex than we see here.

Back in 2003 Parker conceived the Fly Mojo, which brought about many changes including the electronics. Larry Fishman designed a new preamp (basically a Fishman Power Chip), and standard wire hooked up the controls, switches and circuit board instead of the original hard-to-service ribbon connectors.

There's no battery- indicating LED but the new circuit is designed for 200 hours of battery life and we have a flip-top compartment for easy access. The side mounted mono/stereo switch has gone as the new preamp design includes Fishman's 'smart jack' which automatically senses if you're using a stereo or mono cable and either splits the output of the two pickup systems into stereo for two amps, or mixed mono for a single amp.

The guitar's controls have been simplified too. We lose the original master volume and the stacked piezo control - the upper portion of which affected volume, the lower piezo EQ. So now we have volume (with treble bleed capacitor) and tone (with coilsplit pull/push switch) for the magnetic pickups and volume for the piezo.

There are two three-way toggle switches (as opposed to the previous, chunkier-looking metal-tip switches): the upper switch selects the magnetic pickups and the lower one switches between magnetic, piezo, or both.

For all of its ergonomic design strapped on you can't help but feel the Fly is insubstantial. It really takes a while to adjust to the light weight. There's no doubting the excellent playability, though, and the sounds the Fly produces are way bigger than the feel and weight suggest.

Both humbuckers have plenty of power and the tone is rich, responsive and resonant. The high end is a little muted, perhaps, but this rounds out the sound nicely so that introducing the coil-splits you have a highly musical, percussive Fender-like tonality.

The piezo 'acoustic' tone again impresses, though it's more of a picker than a strummer just by the nature of the instrument itself. The sound itself is modern, but not overlight, and although it has that piezo 'pingy' hallmark there's plenty of mileage here.

Combine the two sound sources through an electric and acoustic amp and the magnetic pickups can warm up the lower end of the piezo nicely: there are excellent hybrid jazz tones here and for the creative musician, especially using different effects on the two sources, the sound colours seem limitless.

Ken Parker once told this reviewer that while everyone had an opinion about the Fly, yet most of those opinions weren't based on actually playing one! Yet the point is interesting because the Fly (too radical looking?) has suffered from its challenging visual presentations and unusual sound sources - so much so that many people have never even tried one.

We can happily report that the Fly is being made with all the skill, love and care that Ken Parker originally applied to his ground-breaking design. It remains a wonderful piece of engineering even though, ironically, it is its otherworldly looks that got it so much attention and it's precisely those looks that turn some people off.