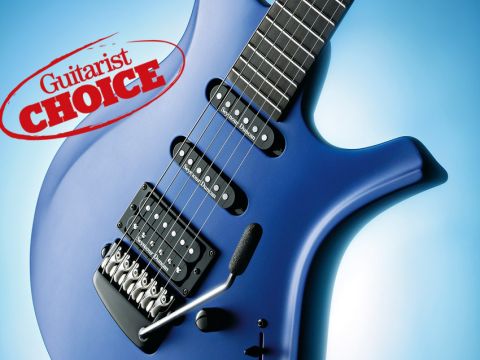 Regular Flys polarise, but the DragonFly does away with most perceived negatives to leave a truly great electric guitar.

The quality, feel and performance of USA-made Parker guitars has never been in question, but there's no doubt that the ultra-sleek yet angular look puts off more players than it should. Enter the DragonFly.

"The concept of the DragonFly line was to create a range that was more traditional looking - but one that was still Parker and would attract a broader range of players to the brand," explains Nick Ellingsworth from Parker USA.

The most obvious change is the upper horn. It's been smoothed down and the angle opened out to give not only a much more expansive cutaway, but a more conventional look.

"The shape was determined by our Manufacturing Manager, Terry Atkins," says Ellingsworth. "Ultimately, we didn't change much: we just modified the upper horn to be more traditional. The lower half of the guitar, as seen from a playing position, is pretty much identical to a Fly."

It does make the guitar more comfortable to play when seated, as the horn no longer digs into your sternum, but the DragonFly doesn't hug you quite so close, as the rear of its body isn't quite as drastically curved. The look is certainly still Parker and the carved alder body (without any of the original's carbon and glass fibre 'exoskeleton' reinforcement) is as skinny as ever.

Weighing in at a mere five pounds, this DF524 is finished in a gorgeous satin majik blue; the DF624 and DF724 offer gloss finishes, with the latter also including a flame maple body veneer.

Another interesting feature, adapted from the now discontinued NiteFly, is the Radial Neck Joint, which features a curved rather than rectangular neck pocket. Originally designed by Ken Parker (no longer with the current Parker company), "We named it the Radial Neck Joint because the neck maintains the same radius all the way into the joint," says Ellingsworth.

"Since there are no flat areas, the joint is more stable and doesn't shift. The entire surface of the neck is cradled by the neck pocket and held tightly in position, which allows for better transfer of sound from neck to body, therefore enhancing tone and sustain."

The new flared headstock design allowed changes to be made to the truss rod. "It utilises a centred truss rod adjustment," chips in Terry Atkins, "and allows us to install the truss rod in such a way that the overall neck shape can be skinnier than the old Fly-style neck with the adjustment on the side of the peghead."

An ebony fingerboard, again not carbon and glass fibre as used on the original guitars, boasts 22 jumbo stainless steel frets and is typically clean.

Pickups comprise the vintage-flavoured yet medium-high output Seymour Duncan Custom 5 humbucker in the bridge, plus two Custom Flat single-coils. The middle unit is reverse-wound and features reverse-polarity hum-free operation in positions two and four on the five-way selector.

As ever, the guitar includes a cast aluminium Parker vibrato that sports six Fishman piezo-loaded saddles and the guitar's main output is either mixed mono or stereo that allows the signals from the magnetic pickups to be split from the more acoustic-like sounds of the piezo saddles.

The DF524 is supplied with a stereo Y-cable, so you can run the two outputs into two amps: the magnetics into a regular amp, the piezos into an acoustic amp or PA.

The Custom 5 in the bridge provides a thick PAF-style tone with the headroom to satisfy more modern styles. It falls short of giving too much piercing treble and with a valve amp's gain set to around half, chords sound huge and solo lines hang in the air like Angus Young's laundry.

Equally, the two Custom Flat single-coils produce big tones that sound great for hot-rodded blues and Texas styles. Through a Fender Super-Sonic 22 it sounds immense, among the most malleable Fender-style sounds we've heard in a while. The hum-cancelling mixed pickup tones provide fat and hum-free sounds that glisten with Strat-style twang.

Position four on the five-way (middle and neck) sounds sufficiently uncommon to turn heads without any danger of audience alienation. It's a P-90 meets a Tele's neck pickup with added low-mids and cut. Position two (middle and slug single-coil of bridge humbucker) or position three (middle single-coil) give full and sparkling clean tones.

At the other end of the sonic spectrum when harder rock tones are used, you can hear the whole guitar rather than just the pickups. Although the included 'Y' lead is a little short, it does make using the piezo system an absolute doddle.

Through an AER Compact 60 and mixed with the magnetic pickups, it sounds impressive enough. For strummed parts, a mix with the centre single-coil creates a good rhythmic sound and works to create a tonally acceptable sound for fingerstyle.

A rich, warm and woody J-45 this is not, but when used with a good acoustic amp, or EQ'd well via a PA, it's yet another sonic plus the DragonFly has going for it.

This subtle re-design of the original Fly could well be the one that makes potential Parker players rethink their fence-straddling strategy. Flys have always looked slightly different - too different for many - but have consistently played well and sounded great. The DF524's new upper horn is far more mainstream in appearance than the more familiar yet controversial angular design.

Combine this with that neat neck joint design, the super-comfortable skinny neck and the intelligent combination of specific pickups that give some genuinely wonderful tones, maybe it's time to re-evaluate the Fly.