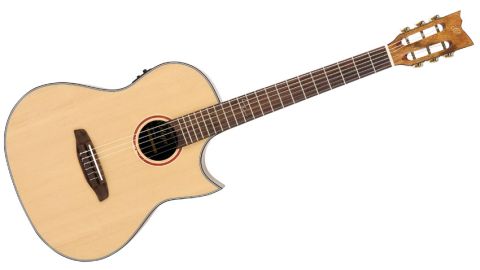 The purist in us says no, but the player says yes! This is a great, affordable example of the modern steel/nylon hybrid.

The original gut, now nylon-string, 'classical' guitar has been used by countless highly influential non-classical players, yet is still seen by many as a secondary choice. However, today, its cache has arguably never been higher on numerous pop, rock and world music recordings and stages.

In its cutaway electro guise it's a rarer bird and what has gradually emerged is a new hybrid instrument, a crossover between the steel-string flat-top and the concert or flamenco-style classical guitar.

A pointed Florentine cutaway adds to the modernist air, likewise the subtle non- Spanish soundhole decoration and 12th fret 'squiggle' inlay. Its body is a bit thinner-depthed than the Rodriguez (90 to 84mm, or 3.54 to 3.31 inches). Although the nut width is the narrowest on review and its deep C-section neck is very steel-like, it plays very well.

Reflecting the guitar's style, the Coral-NY's unplugged tonality is light, as is its projection. It's certainly not a Spanish sound but, like other modern hybrids, it's a very usable sound for jazz and more modern Latin styles.

Plugged in, we heard a nicely balanced output, and that brings the guitar alive. It's actually quite Taylor-like in its modern, brighter tonality.

And although the preamp only features treble and bass EQ, it's neat and very usable, and overall, the Coral-NY provides the best amplified sound of our electro-acoustic trio.