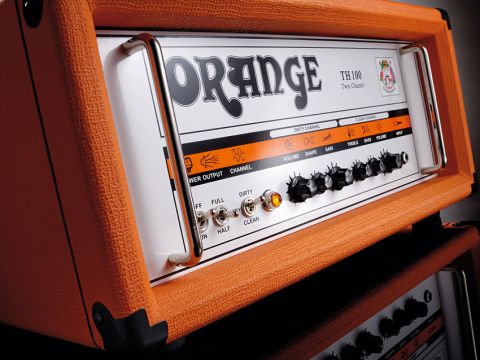 This is an amp for the road, not the pub at the end of your road. Crystal cleans and blistering raunch make this a must-try amp in its class. Turn it up, stand back and grin!

We first encountered the TH100 at NAMM back in January 2011 and although it's taken a while to get our hands on one, our ribs are still rattling from the outrageous punch that the 100-watt head packs up close. But more on that later…

On launch, 2010's TH30 was really quite something, and the model continues to be popular. A compact 30-watter capable of filling a club stage with sound, both head and combo versions can be switched down to 15 or seven watts to get that power tube mojo workin' at manageable volume levels.

"For players who have grown up with the vintage crunch of Oranges such as the AD30, it's still surprising to hear an amplifier with this livery produce crystal, country-style cleans at high volume."

Very cool, and very good news for the real world gigging guitarist. But what if volume is your thing?

What if you crave the glacial cleans and sheer physical force that only a 100-watt head and 4 x 12 cabinet can muster? Enter the amplifier that Orange considers to be both the cleanest and dirtiest that it has ever manufactured.

Unboxed, the TH100 weighs in at a beefy 33lbs - a reminder that although recent years have seen Orange at the forefront of the lunchbox amp phenomenon, there was a time when all gigging amps were awkward to carry over any kind of distance.

Haven't we guitarists become a pampered bunch? Indeed, for practical reasons, you'll be relieved to read that the mighty 100-watt power amp can be switched down to 70, 50 or 35 watts.

Orange's technical director, Adrian Emsley, explains: "The power transformer is tapped in a certain way so that when the amp is switched down to half power on the front, the plate voltage is lowered to around 330 VDC (470 VDC at full power).

"At the same time, the bias circuit is shunted down to make the output valves draw more current in the half-power position. This results in the valves running much closer to class A in this position."

There are no great surprises on the front panel, although the simple complement of just six control knobs makes the TH series some of the best-looking Oranges of recent years.

We've often read that Orange heads just don't look right atop anything other than one of the company's own PPC412s. But as we write this, we gaze over at the TH100 on a vintage-style Marshall 4 x 12 cabinet with a 'salt 'n' pepper' grille cloth, and confess we're of the mind that Orange heads look great paired with any cabinet as long as it has an appropriately retro look.

Despite the TH100's simple appearance, there's some clever stuff going on under the hood. "Each EL34 also has its own internal bias pot so the amp can be biased to run on other types if so desired," reveals Emsley. "This feature can also be used to dial in an unmatched set of valves.

"The front end is pretty close to the TH30 but is of course designed to drive an output stage of less sensitivity. The shape control has also been tweaked to suit the amp."

If some users of the TH30 feel headroom is lacking, there's certainly no such shortage here. For players who have grown up with the vintage crunch of Oranges such as the AD30, it's still surprising to hear an amplifier with this livery produce crystal, country-style cleans at high volume with the authority approaching that of a good Fender Twin.

Piano-like bass and chiming high end are abundant, but should you want the amplifier's clean channel to break up a little earlier, switching down to 35-watts helps, although it's still a sound best suited to larger club stages at the least. This huge clean channel is a great blank canvas for stompboxes, whether they're placed in front of the amp or in the well-behaved valve-driven loop.

On the dirty side of the equation, this beast delivers some of the biggest drive sounds that we've had the pleasure to witness in recent years. These days, few players have experienced the physical sensation of a 100-watt valve amplifier running cranked, but it's something that every guitarist ought to try.

This writer's teenage encounter with a Marshall 1959 SLP at full tilt was an education - at that sort of level the electric guitar becomes more alive in your hands than you thought possible. The playing experience is akin to alligator wrestling as you attempt to keep even the most well behaved guitar under control.

The TH100's dirty channel in full power mode is similarly huge, but more accessible than the non-master volume behemoths of old thanks to the interactivity of its controls.

Orange's impressive shape control again allows you to dial in mid-range voices spanning a gamut from modern metal to mid-rich classic rock. This is a powerful tool in a band context as it allows you to focus the mid-range characteristics of your sound very specifically - a godsend in a twin-guitar group.

Given that AC/DC are probably one of the only acts in the world who consistently play stages big enough to cope with the unadulterated roar of the TH100 on full throttle, the variable power switching can only be good news for everyday players. At stage volume, it's interesting to compare the relative dynamic responses of the various settings - proceedings obviously get a little spongier at 35-watts, but it's still a firmer response than a full Class A circuit.

Players who spend most of their live set with the dirty channel engaged and those who use a lot of palm-muting might find the 50-watt mode most enjoyable as there's a huge, tight low end available without having to push the volume control too far into festival headline set territory.

As ever, the dirty tones are characteristically Orange-y: an ever-present two- or three-day growth of stubble adds just the tiniest hint of fuzz to the equation - and if you ever find yourself in a situation where you feel like there isn't enough gain onboard the good ship TH100 then we'd recommend that you make an appointment to see your GP at the earliest convenience, or give up on valve amplification entirely an invest in a Fractal Axe-Fx.

The TH100 is a great British amplifier in every sense of the phrase, except for the discreet 'made in PRC' around the back that betrays its Chinese origins. As we type this using a Chinese-made computer wearing Chinese-made clothes, is this even an issue?

We've certainly had no reports to suggest that Orange's offshore manufacturing standards are any less exacting than those exhibited by the company's ultra-reliable UK-made amps. Ultimately, this is a pro-spec amplifier that's at once both simple and tweakable, is loud enough for any stage on earth and sounds good at sensible levels too… all for less than a grand.