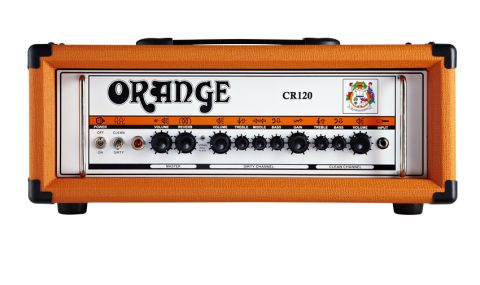 A budget head that doesn't look or sound like too much of a compromise.

The Tiny Terror's arrival in 2007 almost single-handedly kick-started the lunchbox valve amp craze, but now Orange is focussing its efforts on affordable, gig-able solid-state tones in the form of the new Crush Pro series. Here we look at the range's flagship head, the CR120H…

For some time now there's been an obvious gap in Orange's catalogue where more affordable amps with gig-friendly power ratings might sit. Enter the Crush Pro series; it has taken a while, but Orange admits that a lengthy R&D process was required in order to get them to sound right.

"The major breakthrough was getting as close as these have to achieving a non solid-state-sounding [transition between] clean, crunch and overdrive. We thought about going down the digital route like most other brands, but then thought it would be way cooler to make them fully analogue apart from the reverb.

"The main thing we set out to do on the CR60 and CR120 was to give them the feature set and voicing of the all-tube Rockerverb series, but using solid-state components, namely op-amps. Both of these models make full power into eight ohms so that extra cabinets can be added if needed, without overloading the class AB, analogue, solid-state output stage. Both the effects loop and reverb are in the same place in the circuit as they are on the Rockerverb.

"Regarding adapting the Rockerverb circuit to op-amps, I was hands-on but didn't actually do the design work myself," Adrian goes on to reveal. "My part in it was more about tweaking the amp sonically and getting the output sensitivity nailed. Solid-state guitar amps will never sound or react the same as tube amps, but the goal here was to do something very cool with it, at an affordable price."

Unboxing the CR120H reveals a reassuringly beefy combo that feels as robust as its more expensive valve-powered stablemates.

For instance, its chunky toggle switches don't just look the part, they have a   satisfying roadworthiness that you just don't get from the  plastic rocker switches that we often encounter at this end of the market.

The amplifier's control arrangement is logical and straightforward: where the Rockerverb circuits from which the Crush Pro amps are derived feature non-master volume clean channels with mid pots plus a dirty channel master volume, the Crush Pro simply has bass and treble EQ on the clean side, individual channel volumes and a global master volume.

For our money, the lack of a mid control on the clean channel isn't a big issue; we're much happier having the additional control and voicing options provided by the interaction of the clean volume and global master.

The intensity of the digital reverb effect is controlled by a single knob, and with spring, hall and plate-style modes, there's something for most tastes. Channel switching and reverb can both be triggered remotely via single latching footswitch sockets on the rear panel.

Frustratingly, there is no floor switch included, but you can pick up Orange's robust and thoroughly roadworthy unit for an additional £29.

Also around the back is a pair of standard jack sockets for effects send and return - more proof that this amp means business and has been tailored for gigging musicians.

The first thing that strikes us on powering up the combo is what a good job Orange has done of making sure that its signature sonic DNA makes its presence felt. Much like the Rockerverb Series amps, the CR120's clean channel sounds best when it's pushed into break-up, which comes easily in solid-state land thanks to the global master volume.

Despite the lack of vacuum tubes in the circuits, the foggy, soft treble characteristic that's something of a trademark for Orange is here in abundance. It works beautifully for chime-y indie-rock and retro Britpop rhythms. There's much more midrange grit than you'd get from a high-headroom Fender 'blackface'-style clean channel, so if that 6L6 clean sound is your thing we'd recommend that you look elsewhere.

The Crush Pro sounds big and powerful in the room, with more than enough punch for stage use in typical pub and club gigging scenarios. In a studio context, when monitoring the signal from the safety of the control room, it's more noticeable that the clean channel doesn't break up as musically and dynamically when you dig in as we've come to expect from Orange valve amps, but it's still a world away from the kind of characterless 'blunt instrument' clean channel that seemed commonplace on transistor 'rehearsal room' amps back in the 80s and 90s.

Taking over where the clean mode leaves off, the dirty channel - armed with four gain stages to the clean channel's two - can transport you from Free to Slipknot with just a twist of the gain and middle controls.

Push the middle and treble, roll back a little bass, set the gain somewhere around noon and you have AC/DC-style classic rock crunch in spades. With the master volume wound up there's genuine chest-thumping authority from both head and combo, although perhaps predictably, even at the lower end of the gain spectrum there's less string separation and articulation than you tend to get from Orange's all-valve circuits. Conversely, however, if you want filth in the bedroom, the Crush Pro head is more useful than their more expensive valve equivalents.

At any volume level, a characteristic that these amplifiers share with the more expensive end of the Orange range is a palpable chemistry when used in combination with a PAF-style humbucker - there's just something special that happens when you plug a Les Paul or ES-335 into an Orange and flip to the bridge pickup.

All three digital reverb sounds are well-voiced algorithms. Inevitably, the spring reverb mode is the most useful of the trio for everyday playing - it just loves low output pickups and the shimmer of a Bigsby - but it quickly gets overcooked much past 10 o'clock on the dial, so proceed with caution.

All three modes work much better in combination with the clean channel; it's easy to turn your dirty sounds to mush with the same level of 'verb. That said, more leftfield indie-rockers might enjoy the more cavernous extremes of the spring and hall modes - for live use it's easy to set the reverb up as more of a 'special effect' and stomp it in and out as and when required.

Does anyone other than a proper rock star need a head and cab these days? Is the stack dead? These are questions that we've thrown around the Guitarist office of late, and with volume limiters in venues across the nation multiplying like brain-eating amoebae in a disused swimming pool, it's getting harder to justify taking anything bigger than a small combo out to gigs. That said, it's usually a lot less painful to carry a head and a compact speaker cabinet up a pub staircase than it is a combo.

However, when you consider the requisite purchase of an additional speaker cabinet such as Orange's PPC212OB (£350) or PPC412 Compact (£559), the CR120H head becomes a considerably more expensive proposition than it initially seems.

A solid-state amp is never going to be a romantic choice, but at this end of the market it's all about practicality and performance. The new Crush Pro amps tick all the required boxes and benefit from looking stylish and grown-up into the bargain.

While they'd never pass the Pepsi Challenge in terms of feel and tone when compared directly to a Rockerverb in a controlled studio environment, put this amp on a stage, mic it up through a PA and it's more than close enough for rock 'n' roll.

Be prepared to consign your negative preconceptions to the same scrapheap as the stiff and unmusical transistor amps of decades past; Orange has proven that there absolutely is a place for solid-state technology in today's amp market, especially when it punches this far above its weight, sonically.