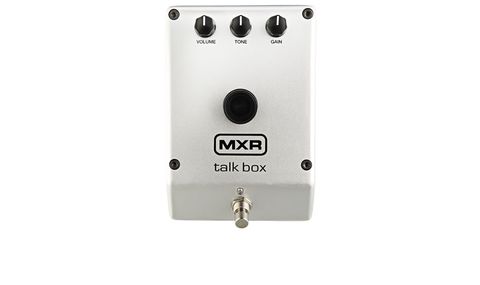 It takes a bit of getting used to, but if you want that classic talking guitar sound, this new unit will show you the way.

It's one of the lesser spotted pedals on the amateur guitarist's 'board, but this new MXR aims to make the Talk Box more accessible. Is it time you mouthed off?

While few of us have actually used one, we've all heard one. The sound of this particular effect is pretty distinct: think Richie Sambora on Bon Jovi's Livin' On A Prayer, Joe Walsh on Rocky Mountain Way, Peter Frampton on much of his 1976 Comes Alive! album, Dean Parks on Steely Dan's Haitian Divorce, and Jeff Beck on She's A Woman, to name just a few.

Yep, we're talking about the talk box - a guitar effect that's created by piping your amplified guitar sound up a plastic tube and into your mouth. This then acts as a sound chamber to form the inputted guitar sound into words and phrases, which are in turn picked up by a vocal microphone connected to a PA.

There have been other home‐built and commercially released talk boxes, but it's the Heil Talk Box, which came to prominence in the 1970s, that seems to be the definitive classic and the progenitor of the MXR. The rights to the Heil Talk Box are owned by Jim Dunlop (which still produces a version), and Dunlop's new MXR take is an attempt to simplify the process and make the effect more practical to use.

Where the Heil Talk Box required an amplifier to work and actually took its signal from your guitar amp's speaker output, the new MXR version has a built‐in amp and speaker driver. You connect your guitar into the Talk Box as normal, and you can connect its output jack to your amp, so your signal flows as normal when the Talk Box is bypassed.

However, when you hit the footswitch and engage the effect, the signal that would go to your amp is diverted up the plastic tube into your mouth. It's loud enough for you to hear for home practice, but you'll definitely need a mic and PA for stage use.

Positioning the tube is crucial to the effect working. It can be attached to a mic stand with the included clip and should extend a little in front of the mic capsule to get its end in the optimum position: in the corner of your mouth held between your back teeth. Taping the tube to a mic and brushing your lips on the mic capsule, (whether connected or not), does help keep the tube where it should be.

As you start salivating, you'll realise this isn't the most hygienic way to get a guitar effect and quietly remind yourself not to lend this gear to anyone... but it soon starts to feel more natural. Wah and other envelope sounds are the easiest to get and Dunlop recommends starting out by mouthing vowel sounds until you get used to things, before moving onto consonants and whole words for the 'talking guitar' thing.

You don't need to make any sound with your voice, just make the correct shapes with your mouth. You'll feel like a bit of a fool at first, but exaggerating the shape of your mouth will get results. The effect produced is actually really good and, of course, it's loads of fun.

Volume, tone and gain knobs on the pedal set up the sound; the gain knob is part of an MXR distortion circuit so you can have dirty as well as clean. It really doesn't take too long before you're creating some satisfying sounds. You can make the guitar sound like it's talking pretty much straight away, but to make it say anything that an audience will recognise will take a bit longer.

Keep working on those mouth shapes and guitar/mouth co‐ordination, and remember this: according to some sources, before he came up with the best‐selling album of 1976, Peter Frampton locked himself away in a practice room with a talk box for a full two weeks to get to grips with the thing.

It's a distinct effect that won't be to everyone's taste, but if it's one you feel you can use, this new MXR offers the most practical way to get it.