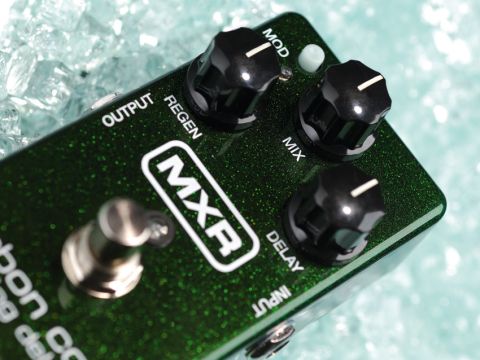 When all the makers of digital delay pedals are adding features to make the sounds of the repeats more 'analogue', it's pretty obvious that there is a demand for echo repeats that are not just pristine clones of the original sound.

The time must be ripe, therefore, for enterprising souls to dust off the old BBD technology and create some new versions of the real thing rather than a digital reproduction of it.

MXR is the latest to introduce a new-build analogue delay with the Carbon Copy that has, er, echoes of the old MXR Analogue Delay (discontinued in the eighties) - not least in its three control knobs and greenish colouring, albeit in a much spanglier metallic shade this time around.

It looks very smart indeed, the same size as other MXR pedals such as the Phase 90 but packing a lot of control into a small space by utilising a triangular knob configuration.

A small 'mod' switch (with blue status LED) brings in a degree of modulation - a slight up and down pitch shift - to add flavour to the repeats. Two internal trim pots, which are accessed by removing four screws and the pedal base (the same for battery access), adjust the width and speed of the modulation applied. The idea is that you experiment to find your ideal sound and then just leave them set.

Here are a few clips of the Carbon Copy in action:

The first thing you notice when you stomp down on the Carbon Copy is the sheer brightness of the blue status LED associated with the on/off footswitch, which may be no bad thing on a dark stage.

Sound-wise the pedal does everything you would expect of an analogue delay, including the regen knob that sets off self-oscillation for dub and spacey effects when turned past midnight.

The sounds range from springy metallic reverb at very short delay times through Elvis-style slapback and on to all types of rhythmic and ambient delay - revisiting Edge and Gilmour up to the maximum 600ms - which is much more than a lot of vintage and some new build units with a maximum delay time of about 300ms can do.

Tonally, the repeats have clarity combined with a dark warmth and a natural sounding decay that seems to work well between guitar and amp.

Now the Carbon Copy has pretty much the same knob controls as any other analogue delay - vintage or new - out there, but the modulation adds more scope.

With modulation engaged on the stock factory settings the effect is very subtle indeed, but with a delve into the innards you can adjust the trim pots for more dissipated repeats that recall the warble of a tape echo.

As a mass-market analogue delay in a conveniently-sized package, there is little around that can touch this pedal.