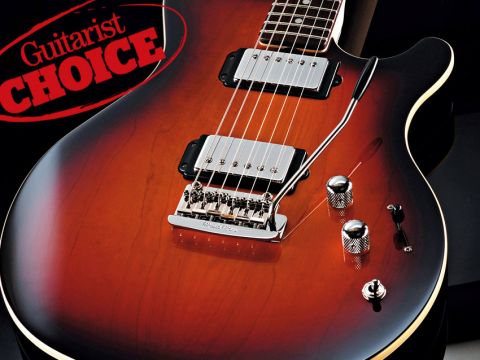 Some might see the Reflex as a bit plain for the rather hefty price-tag. But while it may not be cheap, the guitar's performance is certainly right on the money.

The Reflex is the latest recruit to Music Man's electric range, introduced earlier this year along with the Albert Lee HH. Like the Lee, this features twin humbuckers, while its styling echoes that of the earlier 25th Anniversary model.

In fact, the Reflex is essentially a mass-production equivalent of that limited edition, incorporating many of the same construction and component features, but in a less fancy and accordingly lower priced format.

The Schaller M6-IND locking machineheads also contribute to stable tuning, as does an impeccably cut nut, this being the cleverly compensated design employed across the range since 2005 and offering improved intonation.

The one-piece, bolt-on maple neck lacks any figuring and looks a little bland accordingly, but the subtly asymmetric profile, as used on other modern Music Man models, has instant feel appeal.

Playability is further enhanced by the sleek surface supplied by this maker's special oil and wax treatment. Only the headstock is gloss-painted, with the face matching the body finish; a nice bit of colour coordination that's normally an extra cost option, but is standard on the Reflex.

The flattish radius rosewood fingerboard maintains this warm welcome, as do all 22 consistently smooth medium gauge frets. The latter are left quite tall, but not so tall that they're likely to pose you any pressure-related intonation problems. Their partner position dots are standard size, departing from the mini tradition established on earlier Music Man six-strings.

The body outline is borrowed directly from the 25th Anniversary, which means measurements are again slightly bigger than those of the Axis, although the end result is comfortable and compact.

Construction is another common feature, employing the same chambered basswood chassis with a central mahogany tone block and maple top - a combination that was first seen on the 20th Anniversary Silhouette.

Unlike the Anniversary models, the Reflex foregoes a fancy front, presenting a plain face that confirms its lower price. Adding £100 to the asking price, the vintage sunburst finished top is contrasted by equally high-shine black elsewhere, the division being marked by cream front edge binding. This follows a gentle forearm contour, while the back incorporates a bass side bevelled edge that creates extra creature comfort.

As on the 25th Anniversary, the pickups comprise a pair of DiMarzio-made custom humbuckers with chromed covers. They're mounted in special moulded plastic surrounds, these being accommodated in accurately executed body routes and secured via three spring-loaded screws that ensure pickup angle matches the string slope.

Master volume and tone pots partner a five-position lever-type pickup selector, which provides either or both humbuckers, plus the combinations of inside or outside coils.

Like its 25th birthday buddy, the Reflex adds a chunky two-way metal toggle that offers series or parallel operating modes. As on some other recent Music Man guitars, the firm's usual plate-mounted output jack has been replaced by a barrel type, and hopefully this will prove more reliable than many of the breed.

The Music Man vibrato unit is a twin-pivot proprietary-design that adds a further £55 to the Reflex's retail price. Swing tension of the push-fit, click-in arm can be altered via a grub screw in the chunky inertia block. The latter is now brass for a bit more mid-range colour, while the vintage Fender-style steel saddles have centre-indented tops to help keep strings in line.

Straight from the factory, the unit sits flat on the body allowing down bends only, but a floating action can quickly be achieved if desired. Operation is impressive with either set-up, offering consistently accurate return to pitch even after some pretty severe leverage.

The Reflex has an airy acoustic ring that's allied to resonant natural sustain and plugging in enhances this impression. With series mode selected, both humbuckers are appropriately meaty, although this muscularity is balanced by an even response and good string balance.

The neck pickup keeps things sweet and bluesy, while the bridge position provides plenty of attack. The two singlecoil combinations brighten things up, but a bit less than might be imagined, with the outside two coils offering only a subtle variation of the both-humbuckers-on position.

Switching to parallel mode takes output down and the overall tonality thins out a little. Nasal overtones increase on the single-coil settings, but again the changes are actually less pronounced than expected.

That said, the differences do become more discernible under gain-laden conditions, with the parallel and single-coil options helping to maintain definition and dynamics as the dirt content is increased.

To some, this Music Man might seem a bit of a Plain Jane for £2,000-plus - we know that highly figured maple tops really help sell guitars when you're in this price bracket. Plenty of people don't want all that bling, however.

Moreover they (we) just want a cracking quality guitar with a fine range of sounds, exceptional playability and understated looks: this is as good an example of that as you're likely to find.

The chambered basswood/mahogany/maple construction and dual humbucker arrangement gives the Reflex its own tonality, distinct from strict Fender or Gibson traditions, that nevertheless sits comfortably in a wide variety of playing styles.

And, like many Music Man guitars since the Silhouette, it has the brand's familial feel; efficient, effortless and with that oh-so gorgeous neck profile and finish. A fine guitar.