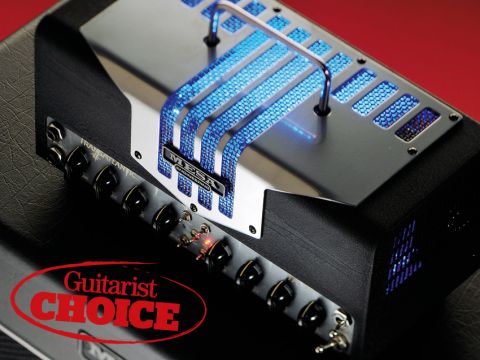 Every bit a pro all-valve head, despite the miniscule dimensions: your life just got easier.

Mesa/Boogie doesn't do kneejerk reactions when it comes to amp trends. On the contrary, the now legendary Californian brand quietly boasts something of a stellar track record in helping to redefine both musical and technological boundaries.

Its Mark series amps power countless players to new levels of gain, volume and portability, while its Rectifier stacks helped in no small way to reinvent the whole metal genre. The company's next focus is the increasingly popular - thanks to the Orange Tiny Terror - micro amp market with the impossibly cute TransAtlantic. Two channels, five modes and up to 25 watts of blue-glowing fun.

The TransAtlantic gets its name from the classic British and American sounds that inspire its dual channels. Channel one begins in traditional Vox tonal territory and has two modes; normal for the cleanest tones, while top boost adds more gain. Channel two has three modes: Tweed for clean to break-up, then Hi 1 and Hi 2 for more gain.

Like many Mesa amps, the channels are footswitchable but the modes are not - in the interests of maximum versatility, the gain and tone differences are very wide between modes, so it's not simply a case of flicking a switch - you need to make other adjustments. That said, each channel's controls - volume, bass, treble and cut/ master - are so blissfully simple it takes but a few seconds to tweak things between songs if you need a radically different sound for a specific part of your band's set.

Channel one also has a tone 'cut', just as you'd find on many Vox AC30s: you cut presence and high-end as you turn it clockwise. Pull it out and it becomes a master volume for channel one, presetting the 'cut' value to around 11 o'clock on the dial.

Channel two's controls are almost identical, but with no cut control and a permanent master volume. As Boogie states in the TransAtlantic's manual, your amp's tone is 50 per cent preamp and 50 per cent power section, and the latter is an area in which the company has trailblazed in recent years.

So here you get a pair of EL84 output valves, which you can configure in one of three ways. Each channel has it's own independent power switch that draws on Mesa's Multi-Watt design to offer either five watts single-ended class A (one valve), 15 watts class A (two valves) or 25 watts using Mesa's Dyna- Watt design (also two valves).

It's every bit as much a tonal option as a volume consideration: the lower the power, the more clip, compression and drive from the power section. That you can switch between say, five watts in one channel and 25 in the other - silently and without fuss or delay - is a testament to all the unseen work and development that goes into making amps such as this a real pleasure to use.

After that, not much: no effects loop, no slave out, no reverb. Complicated this is not. Aesthetically it's very hard not to love the black powder-coated metal box with platinum pearl detailing. It's built like a tank, in accordance with Mesa's usual exacting standards.

The custom-designed PCB houses the main components, including valve bases in a feat of efficient design, while a pair of transformers are bolted to the chassis, the hefty OT seemingly the main size determinant in terms of overall height.

And when you turn it on? It glows blue thanks to an array of internally mounted LEDs. We just love that. Hooray too for the padded gigbag, which also transports your power cord, footswitch and cables. Guitar in one hand, cab in the other, amp over your shoulder. Brilliant.

Kicking off at 25 watts with a Stratocaster, channel one's normal mode has a punchy, powerful delivery. It will overdrive if you push it, but it's a little ragged around the edges, especially in full power mode - much better to leave this for clean duties; funky rhythms and choppy chord stuff, even if we are left begging for reverb.

It's the same story with humbuckers, but with more girth, as you'd expect. In fact the bottom-end out of the supplied 1 x 12 open-backed cabinet (£429.99, with one 12-inch Mesa-Celestion MC-90 speaker) is the real eye-opener - we found ourselves looking in the back time and again just to make sure there wasn't something else hidden inside!

Engaging the top boost mode brings in more gain with an addictive sizzly bite that'll go from a sixties pop vibe through to a more brooding, saturated drive. The tone cut control does the majority of its useful business in the last third of its travel. It works as it does on many AC30s in that at lower volumes it can help round off crystalline highs, but without removing the extra gain and drive the treble pot brings.

As you push the master volume, the extra compression and fatness of the power section means you can go easier on the cut. If you're using the pull master volume in channel one and playing at lower volume, the cut's preset position at 11 o'clock can feel bright: your guitar's tone control is your friend in this situation.

Switching to the 15-watt class A mode, brings a subtle softening of the overall attack and a slight lightening in the bottom-end. It's not a big drop in volume, but it does feel different under your fingers, offering an easier ride at medium volumes when you don't need the extra headroom of full power.

Switching down again to five watts drops the volume significantly and reigns in those strident highs, bringing a much more 'together', spongier, elastic feel with more overtones and harmonics. This mode is a joy for wailing away with abandon, be that when recording or practising.

Channel two's power options have much the same effect as channel one's, though we're dealing with a different set of sounds. Tweed brings to mind some cleaner blues tones for the most part, not too much in the way of scooped mids but still plenty of enveloping bass and sparkling treble to put you in a Fender kind of mood.

The Hi 1 voicing ups the ante significantly, tightening the bottom-end and pushing the gain and mids to a very strident tone, particularly at 25 watts. This is billed as the Marshall-type sound, but it feels more focussed than that, cutting decisively and sending out the single-note stuff so that nobody can miss it. With a humbucker-loaded guitar, classic rock sounds abound - from an Angus -style crunch to more of a modded Plexi meltdown, especially if you knock the power down to 15 watts for a smoother feel.

Through the 1 x 12, it can get quite square and directional when really cranked and it's here you realise you don't have a hulking great power section moving a lot of air. AC30s aren't totally dissimilar in that respect.

Hi 2 feels less visceral than Hi 1, instead with a smother ride in the bottom-end and upper mids; it's a more 'modern' gain feel that'll sing very sweetly if you're preference is for a sophisticated type of drive for melodic soloing. It's the carefully constructed solo to Hi 1's balls-out wailfest.

And volume? We're knocked out with how the TransAtlantic puts those 25 watts across, even through a 1 x 12. Un-mic'd pub gigs, rehearsals, mic'd up on bigger stages… Moreover, back at home the five-watt single-ended class A mode is so much fun. Rather than simply a closed-down, gated version of the full thing: it's near as dammit a different amp at five watts. Extremely impressive.

Yes it's cute and yes it glows blue. In fact a number of people tried and failed to stifle laughs when we sat it atop its 1 x 12 cab, un-mic'd at gigs. But two hours later, they're looking in disbelief that there's no other amp hidden somewhere.

In a straight fist-fight, the TransAtlantic trounces Orange's standard Tiny Terror for volume, headroom and flexibility. It's edgy and aggressive when you want, smooth if you like and offers staggering power delivery for its modest 25-watt rating. It is considerably more expensive than even the UK made Hard Wired Tiny Terror, albeit still less than Bad Cat's Lil' 15; justified for semi pros, less so for hobbyists. A whole new world in micro amps.