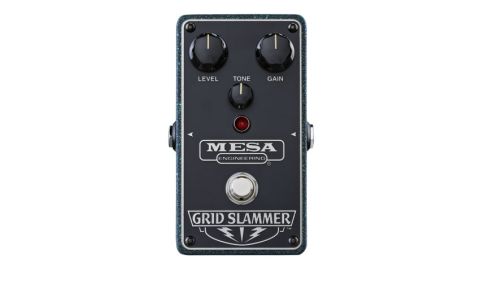 We were as surprised as anyone to find out that Mesa/Boogie, bona fide guitar and bass amplifier legend, has decided to dip its tone-obsessed toe into the crowded waters of the pedal market. Here we look at the Grid Slammer - a straight-forward, low gain overdrive.

The guys from Petaluma have built pedals before - the valve-powered V-Twin, for example, has its own place in history - but releasing a quartet of 'normal' stompboxes into a saturated market? Well, with a 40-year-plus reputation for some of the most memorable distortion tones of all time, you might argue that saturation is exactly Mesa's business.

Each of the new pedals shares the same sturdy metal chassis into which is loaded its custom PCB-based innards. The pedals are a little taller than the 'standard' MXR-type box, and finished to impeccable standards. All the jacks and pots are securely screwed to the chassis, the only downside being the forever-annoying task of removing four screws to access the batteries. Like most of the range, the Grid Slammer specifies a 15mA current draw (slightly higher than many overdrives) - you get a good few hours off a nine- volter, or use an AC adaptor.

This pedal takes us into simple, unfussy, relatively low-gain overdrive territory. The gain and level controls enable you to balance the level of drive with the overall volume you want, while the tone pot offers global control of the EQ - relatively more dark or bright, however you like it. And that's it: super simple, no fussing.

Like the recently reviewed Tone-Burst, the effect this pedal has on your rig really depends on your rig itself. Pedals with this design ethos became popular for pushing already overdriving amps further into distortion and compression, and used like this, the Grid Slammer's inherent mid-frequency hump gives you that drive and punch that's perfect either for solo boost, harmonics and sustain, or indeed for a full, chewy and rich, saturated rhythm sound.

Into a very high-headroom clean amp there's enough on tap to get you driving nicely into blues and lighter rock territory, with extended dynamic control under your fingers, but not enough for singing, liquid hard rock. The midrange fattens up Strats and Teles; Les Pauls, 335s and the like get extra chewy harmonic overtones.