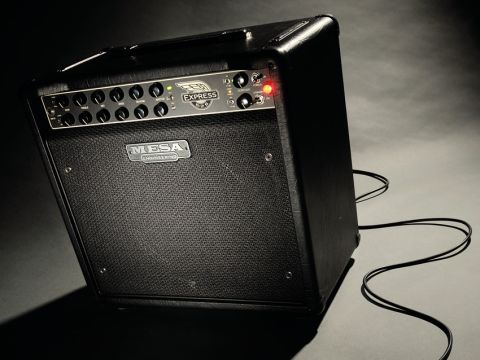 Another practical and portable giant killer from Mesa that you'll find hard to resist.

Mesa Engineering invented the concept of the 'giant-killer' guitar amp with the original Mk1 Boogie back in the early seventies. Ever since, designer and company founder Randall Smith has proved time and time again just how good he is at getting top tone and all the features any player could ask for from the compact 1 x 12 combo format.

The 5:25 Express, forming part of Mesa's current entry-level range, is no exception. Mesa's whole look is based on a high standard of finish, with elements such as the logo, badge and even the studs that hold down the leather corners all receiving close attention to detail.

Inside it's the same, custom components occupying a beautifully finished printed circuit board, hand-drawn by Smith himself. The Express 5:25 is a proper two-channel design, with two almost identical sets of controls arranged in double-decker fashion on the front panel.

Each channel has two distinct voices, accessed by toggle switches near the gain controls. For the upper channel, these voices are called clean and crunch, while the lower channel's are called blues and burn, giving you a pretty good indication of what to expect.

Each channel also gets a variable contour control, which is basically a preset EQ based on the popular 'V' shape graphic EQ slider settings many Boogie users choose. You can preset this effect on, off or have it footswitchable.

The Express 5:25 can also be run in two very different power amp modes, delivering approximately 25 watts in Class AB push-pull or just five watts from one valve in pure single-ended Class A.

This feature is operated by a toggle switch on the rear panel, where you'll also find other typically pro Mesa features such as remote switching jacks for channel, contour and reverb functions, a series effects loop and a trio of loudspeaker jacks.

All Mesa amps are high performance gain monsters and that means they take a little getting used to. The tone controls - especially the treble knobs - are very powerful, so even small changes can affect the sound. Consequently, there's a vast range of clean and distortion effects to explore.

The Express's clean character is sweet and rich with a slight compression at higher volume that's highly addictive and makes fast picking cascade from the loudspeaker. Flip this channel into crunch mode and you've got a real taste of what's to come, with a fast-attacking rich distortion.

Channels 2's 'blues' voice opens the door to a wide expanse of lush tones that are equally flattering to single-coils and humbuckers, especially in Class A mode. The higher gain stuff resides in the 'burn' voice and it's here that the Express really demonstrates its heritage, with a fluid sustain that begs you to hang on to every note.

Engaging the contour feature is like the difference between mono and stereo - all of a sudden the tone leaps forward, making it easy to dominate a live mix without turning up the volume. It's as though the peakier, harsh stuff that plagues many amps at higher volume settings is being filtered out, to leave only the best sounds an amp could make.

Mesa's entry-level range has always been of particular interest, because it seems as though all Randall's favourite tricks end up being distilled here. The Express is a real tone monster, capable of outplaying amps that cost several times as much. It isn't the cheapest entry level amp you can buy, but it has the Mesa badge and that puts you in the company of many of the world's greatest players, past and present. Serious money, serious amp.