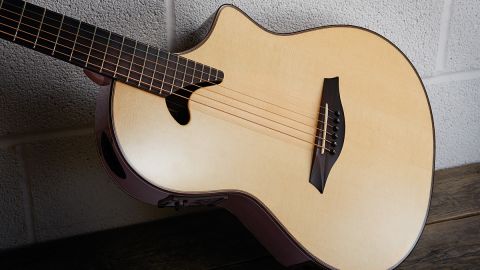 The P-310 is superbly made and conceived, and as a onstage electro with a modernistic twist, should really make numerous bigger brands sit up and take notice. Remember the Mayson name.

You've never heard of Mayson? Neither had we. Its instruments are made in Huadu, China and designed by Alex Wang who worked "on the Mayson philosophy for years", says the brand, before production started in 2011: "He reinvented the acoustic guitar, combining the soul of old fashioned luthier skills with the accuracy and consistency of modern hi-tech machinery."

Mayson promotes various improved features that all amount to a "NASA meets Stradivarius" approach. On test here we have the Performer P-310, a thinline stage electro, which certainly looks the part.

Its 366mm (14.4-inch) body width puts it into the modern small-body size while the body depth is reduced to 77mm at the base tapering to 69mm by the heel: that's pretty thin.

The neck joins the body at the 14th fret and the scale measures 648mm (25.5-inch): pretty conventional. But the body is severely cut with a graceful dropped cutaway - which reminds us of Breedlove - allowing pretty easy access to the top, 24th fret. Yes, 24! Only 18 are full-width; the remainder are partial frets that become narrower due to the long curved tip of the ebony 'board.

Is that a soundhole? Yes, it's small but again very cleverly shaped. There's a larger elliptical soundport on the upper bout's bass-side, just north of the Fishman Pro Blend preamp.

There's something of the Maccaferri design in the less modern-looking slotted headstock and the individual tuners are recessed into the side of the head, which prevents the need for mounting screws (a bolt holds it, like a Schaller electric tuner). The nut is bone, as is the compensated saddle, and there's a complex 'invisible' head-splice and separate heel piece.

The neck itself has a reasonably deep, wellshaped C profile and the medium frets are ultra tidy; position dots are side-only.

Played seated, it's very comfortable. There's no deep low end, but an almost Maccaferri-like midrange focus, with a modern sparkling high end. That sloped cutaway means there's a tendency for it to slip off your right leg but it's an easy adjustment.

Plugged in, the Fishman preamp is well featured with treble and bass sliders, plus mid contour, along with pickup/mic blend. On top of that we have small rotaries for volume, notch gain and frequency, plus a slide switch for phase. The only thing missing is a tuner.

Plugged in with the sliders set in their mid position, it's a pretty good sound - the bass end is compensated for, certainly in line with say Taylor's similar-sized Grand Concert. Even so, the lows can get over-strong, but tuned down to D, the small P-310 starts sounding rather big - especially in a fingerstyle solo setting.