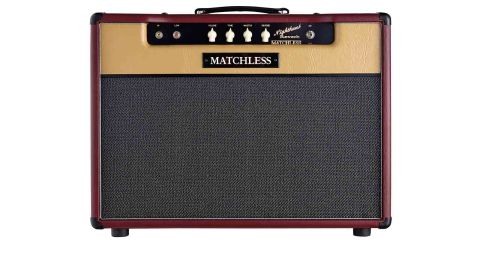 A stunning small combo for the valve purist, built by one of the ultimate boutique amp builders.

Matchless is renowned for being one of the first and few manufacturers to build modern, true point-to- point amplifiers in any kind of serious numbers.

From its debut in 1989 with the jaw-dropping DC-30 - a heavy-duty, money-no-object 2x12 combo inspired by that iconic British amp with a similar name - Matchless played a large part in kick-starting the so-called 'boutique' amp market.

The company has had its ups and downs, but is now stable and well established as one of the world's premier and most exclusive amplification brands.

The legendary DC-30 is still in the Matchless catalogue, of course, but it also forms the inspiration for some other models, including the one we're looking at here: the Nighthawk 15.

Based on the DC-30's channel two, the Nighthawk 15 features a special preamp that uses the EF86 valve - a small high-gain pentode designed specifically for audio circuits and used in the normal channel of early Vox AC15 and AC30 amps.

The EF86's high gain exceeds that of most triodes, the drawback being its tendency to microphony, with some brands more susceptible than others. The best early EF86s came from Mullard and Telefunken, with many of them used in small radios.

The rest of the Nighthawk's circuit uses more well-known valves: a single 12AX7 driving a pair of EL84s, a 5AR4 rectifier and two extra 12AX7's that on this sample power the optional all-valve reverb circuit.

The simple, single-channel design is given style and substance thanks to a beautifully engraved, backlit control panel. There are knobs for gain, tone, master volume and reverb level.

The tone control is a rotary switch with six positions that gradually decreases the bass and mids, providing a simple and repeatable means to dial in any guitar.

On the rear panel we get a pair of four- and eight-ohm speaker outlets, a send and return for the Nighthawk's series effects loop, and a footswitch jack socket to control the aforementioned valve-driven spring reverb circuit.

As with any pure valve-rectified design, it takes a few minutes for the Nighthawk's voltages to sort themselves out. Once they do, we're pleasantly surprised by how little hum and hiss the amp generates.

The master volume and gain control work together to combine preamp gain and power amp clip, while the rotary tone switch is a simple yet effective way to dial in practically any guitar.

We audition the amp with a variety of guitars - three Les Pauls, including a mint '72 Custom, a Fender Custom Shop Nocaster, an old Strat loaded with Duncan Alnico Pros, and an Ibanez AFJ-95 archtop.

While the Nighthawk manages to flatter all of them with its blend of classic British and American overdrive, the brighter instruments gave the best results, particularly at higher volumes, where the tone control is less effective as most of the distortion comes from the output stage.

The Nighthawk's valve-rectified power supply, Class A output stage and custom transformers produce a gentle, natural compression effect that clings onto each note, rounding the attack and squeezing every last drop of sustain into the custom Celestion loudspeaker. The reverb is one of the best we've heard, with a long, smooth decay and practically no noise.

The Nighthawk is simply one of the best-sounding small combos we've ever played. Okay, like many boutique amps it's not particularly versatile, it's quite large and heavy for a 1x12, and the best sounds occur in a relatively small window.

There's a tendency for things to get a little mushy at peak volumes, too, but that's not what this amp was designed for. Roll back the gain and master to around one o'clock and the Nighthawk is audio dynamite, capable of turning any indifferent guitar tone into something world class.

Of course, there's a price to pay for this first-class tone trip, and it's a big one. But if you want an amp to end your search for the 'perfect' guitar tone, this might just be the one, making the Nighthawk's exclusive price tag one that's worth saving up for. Matchless by name; matchless by nature!