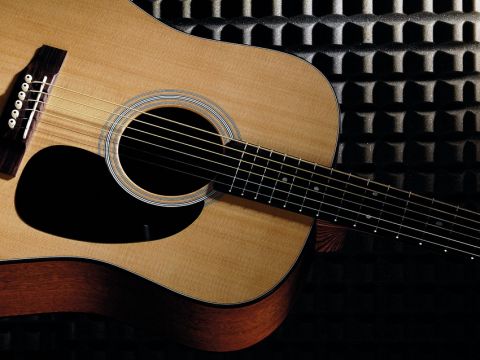 Keep-it-simple presentation concentrates on the prerequisites of a strong-performing dreadnought.

Martin's original 1 Series model, the D-1 dreadnought, was launched in 1993. At the time it was the first full-size Martin to retail under $1,000, and likewise in sterling here in the UK. Undoubtedly, a major reason for its introduction was as a response to increasingly fierce entry-level competition from other North American makers, not least Taylor with its 410, Guild's D4 and DV52, and Larrivée's D-05.

The spruce/mahogany D-1 was subsequently joined by the rosewood-backed D-1R, two similar auditoriums - the 000-1 and 000-1R - and a pair of mahogany-backed basses, the B-1 and B-1E electro. Other models that appeared during the range's lifetime included a 0000-1 grand auditorium and the DC-1E cutaway dread electro.

Whichever, the all-satin-finish specification involved a solid top and back and laminated sides, necks of either mahogany or Spanish cedar, and A-frame 'X' bracing where the 'A' braces tied into the neck block, which itself had a buttress extension under the top to add support for the upper reaches of the fingerboard.

The 1s were also notable for being the first Martin series to employ its bolt-assisted mortise and tenon neck joint, which was later rolled out to the cheaper Road Series and HPL (High Pressure Laminate) Xs, and the more upmarket 15 and 16 Series.

The bolting aspect has sometimes been misconstrued. The joint is actually glue-bonded, the bolt serving as a clamp while the glue is drying, so the mortise and tenon doesn't act like a dovetail in intrinsically cleaving the neck to the body.

The bolt could be discarded afterwards, but Martin chooses to leave it in situ and there are a couple of spin-off production benefits - first, the bolt hole in the neck block allows the body to be secured tightly in its mould during assembly; second, the heel's threaded insert enables the sprayer to attach a handle to the neck to make the finishing process easier.

The 1 Series was part of the Martin range until early 2006, when it was phased out. Part of the rationale for doing so perhaps being that Martin has its similarly priced Road Series, which had incidentally been introduced in 1996 for similar competitive reasons.

The Roads, however, have laminated backs and sides, so post-2006 there were no all-solid instruments below the pricier all-mahogany 15 Series and the 16 Series. The company clearly became concerned about this gap in the catalogue, hence the recent relaunch of the 1 Series, now featuring all-solid-wood bodies and other changes besides.

As in 1993, Martin will have been mindful of present-day competitors which, no surprise, still centres chiefly on the same other American brands - Taylor, Guild and Larrivée. The new range thus far comprises four models: two dreadnoughts and a pair of OMs, including a cutaway electro within each body style.

Hear it in action in the following clip:

In most outward respects the new D-1 looks very similar to the old model. One aspect that differs greatly, though, is the neck. In place of traditional wood, it's now fashioned from a multi-laminate called Stratabond.

Not a synthetic, it's actually a sandwich of approximately 30 lengthwise layers of birch, impregnated and bonded with resin. Those of a certain age might remember something similar on some Framus necks from the sixties.

There are two practical advantages: first, it's claimed to be 25 per cent stronger than mahogany (which seems credible); second, it's a more sustainable material at a time when mahogany is not only becoming much more expensive, but from some sources endangered too.

A third constructional benefit is that the resin impregnation provides its own sealing and finish, so no further treatment is required. The feel is akin to a regular satin finish - fast and generally very smooth - though some slight ridging between the laminates is detectable here and there.

Aesthetic appeal is another matter. Some will undoubtedly regard it as visually too outré and perhaps a tad agricultural; others will be content that it simply does its job. Face on, the Stratabond is disguised cosmetically by the headstock's rosewood-pattern HPL overlay and, of course, the rosewood fingerboard.

Whereas the body's back and sides were once mahogany, they're now made of sapele (remember, all solid wood). A sort of cousin of mahogany (if not of the same species), sapele is sometimes unfairly regarded as an inferior tonewood, but it looks nigh-on the same, has not dissimilar tonal properties and, again, is a more sustainable and available alternative. It's cheaper too, helping keep costs tight.

Other external body accoutrements remain largely the same: a rosewood belly bridge, black binding, multi-ringed rosette and a light-coat satin - actually nearer matt - finish. The teardrop pickguard is black, whereas it was tortie on early original D-1s. The top continues to be Sitka spruce and the one here is a good, close-grained example.

Internally the body still incorporates the fingerboard buttress extension and the tied-in A-braces, but the main bracing has been re-jigged. In place of the old arrangement, which involved an angled bridge plate and single transverse strut aft of the 'X', the new pattern squares up the plate and involves two, longer, transverse braces.

This might seem a beefing up of things, but in fact it's a lighter system overall thanks to the transverse braces and the rearward half of the 'X' being scalloped, where it wasn't previously. Internal finishing is pretty much spotless and rosewood reinforcing strips around the rims affirm the all-solid build.

Dimensionally, the D-1's neck profile is Martin's standard dreadnought fare, kicking off at just under 43mm across the nut, with 54mm string spacing at the bridge, the same as the neck span at the octave. The grip is of a comfortably moderate depth, very subtly 'V'-shaped along the crown, but not so obvious as to deter 'V'-neck haters. The thin fretting is smartly dressed and the action is good.

The revised bracing is said to have enhanced the D-1's sound and, while we don't have an old model on hand for a direct comparison, the newcomer gives a robust performance.

It has a decent degree of long-sustaining punch, the tone is nicely counterpoised between mellowish low-end warmth and a quite sunny treble, while healthy dynamics are unlocked easily with application of a pick. In short it's a rather good dreadnought all-rounder.

Whether judged against the lower reaches of rival American brands or the upper echelons of sundry Far East offerings, these new 1 Series guitars face some pretty stiff competition in the £1,000-or-thereabouts range, and their few-frills cosmetic approach will be too plain for some.

At heart, though, these are excellent guitars, not merely because they bear the illustrious Martin name but because they deliver all the essentials of what constitutes a dependable, easy-playing and good-sounding workhorse instrument.

They're very well made guitars, which reward your playing, yet at the same time are ones that you don't need to feel too precious about dinking. They're there to be enjoyed, simple as that, and represent a welcome return to the Martin catalogue.