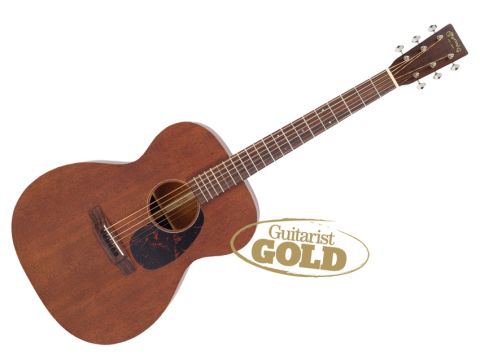 It looks brilliant, plays and sounds amazing and at this price point, its Guitarist Gold award must be the no-brainer of the century.

The first all-mahogany guitar was Martin's 2-17, introduced in the early 1920s. Possibly borne out of the Hawaiian music and ukulele explosion that hit America in the interwar period - Martin ukes were mostly all-mahogany - this small-bodied instrument became a trendsetter for the burgeoning acoustic blues scene. Later that same decade, arch rival Gibson jumped on the bandwagon with its own mahogany-top effort, the L-0.

Blues players loved these instruments with their bright but sweet trebles and a midrange that cuts through loud vocals. They were also cheap - $25 at the time.

The Style 15 came into being in 1940, but various American companies continued to make all-mahogany acoustic guitars up until the '60s, when availability of spruce (which had been a problem post-WWII) was no longer an issue.

As a result the popularity of these 'austerity' instruments waned to the point where the big firms no longer bothered with them, although a couple of notable exceptions were Guild's D-25 and the cool-looking, bolt-on-necked Fender Newporter.

When Taylor successfully debuted the 412-M in 1996 it suggested that the time was perhaps right for this intriguing style of acoustic to return. Martin launched the strictly budget D-15 in 1997, followed by the 000-15 and others.

For 2010, Martin has added the dreadnought sized D-15M and its smaller bodied sibling, the 000-15M - the M suffix indicates a number of spec changes over the existing 15 Series guitars that result in a small price increase.

Both instruments feature Martin's bolt-assisted mortise and tenon joint, first seen on the D-1. Not only helping to keep costs down, this 'glued and screwed' assembly has also proved structurally stable and tonally more than up to the job.

Featuring the no-frills look and satin finish of the existing 15 Series these are darker stained over genuine mahogany (including the neck) instead of sapele - a close relative that possesses very similar qualities.

When it comes to acoustic guitar design and construction, there's something to be said for the plain and purposeful approach. An acoustic guitar's worth is all too often measured by the quantity of molluscs who sacrificed their lives to decorate it or the length of fancy materials that bind every conceivable body, neck or headstock; or indeed the sheen emanating from the precious plating of its metal ware.

What you get here instead are the barest essentials for good, workable, pro-standard, six-stringed musical instruments.

Solid timbers are used throughout the 000-15M's construction. Where Martin could have skimped with laminated sides, back or neck, it has remained faithful to the ethos of quality not frills. So here we see no bindings, yet the subtle lines where the top and back join the rims and where the East Indian rosewood peghead veneer meets the headstock, leave a tasteful impression of such things.

Martin has chosen East Indian for both fingerboard and the traditional belly bridge (now with ebony bridge pins) too. Saddle and nut are both bone (the standard 15s use a Corian nut and a Tusq saddle) and the simple white-black-white soundhole rosette is inlaid, not a decal as on the standard models.

The pickguard is pucker Delmar, the Waverly-style open-gear tuners differ from the standard model's enclosed type and we have an old-style Martin headstock decal. Even the fingerboard inlays are changed from standard dots to abalone diamond position markers and we get an ebony endpin.

The mortise and tenon neck joint that Martin has used on certain models for almost two decades now utilises a glue and bolt system that keeps the structure solid and yet simple to make.

The traditional dovetail method requires woodworking mastery and is altogether more time consuming. A stamped wooden model and serial number plate covers the bolt's entrance hole in the neck block, and can be removed should major surgery ever be required.

Inside, a simplified A-frame version of Martin's X-bracing system incorporates an offset box section that houses the reinforcing bridge plate. Sitka spruce struts and mahogany kerfing tie the body's components together to create a taut and vibrant tone chamber that's ready to amplify the strings' vibrations.

Internal fit and finish are all exceptional and there's no excess glue or unwanted debris to mar the quality evident elsewhere.

This is a 14-frets-to-the-body design and the neck itself is what Martin calls its 'modified low oval' - a slender 'C meets V' profile that's 43mm (1 11/16-inch) at the nut rather than the wider and traditional, more fingerstyle-friendly 44.5mm (1 3/4-inch). These dimensions give it a great 'all-round' player appeal, though, and Martin has set the action perfectly for pretty much anything you care to throw at it.

Even without a cutaway (which would spoil the look entirely) there's enough top-end clearance for most needs - first position blues licks at the 12th fret are no problem and that's the main reason most 000-15 players would venture that far up. You might want slightly meatier strings for serious slide duties, but we encountered no problems tuned to E and with a more restrained bottleneck approach.

The mahogany top seems to deliver a supremely balanced tone with no 'sag' but just delightfully responsive and tuneful results. It's hard to be certain but the impression is that the overall sound spectrum is a tad narrower than that of spruce - not quite so much treble or bass - but this in no way hampers the guitar; in fact it could even make it better for vocal accompaniment since the tones of instrument and voice are that much more evenly matched.

Sure, its size offers a limit to how much brute force can be extracted, but treat it with respect and this little guitar will reward you with a level of class that belies its price and humble beginnings.

When a company with Martin's heritage takes quality materials but removes all the fuss, what we're left with is its guitar maker's art, laid bare. This new addition to the long-standing 15-Series features a slew of improvements making, we think, what were already very good guitars that bit better. Martin's artistry is alive, well - and kicking!

The 000 has a bold speaking voice that punches single notes or plucked chords to the front of any vocal ensemble. Put it in an open tuning and get out your slide and it will equally oblige, just as those original mahogany Martins did almost 100 years ago.

We don't recall any acoustic guitars - from any maker and at whatever price point - that have caused the stir that this simple-looking 000-15 and its D-15 sibling have managed. But it's their total, non-frilled fitness for purpose that has galvanised us all into wanting one so much.