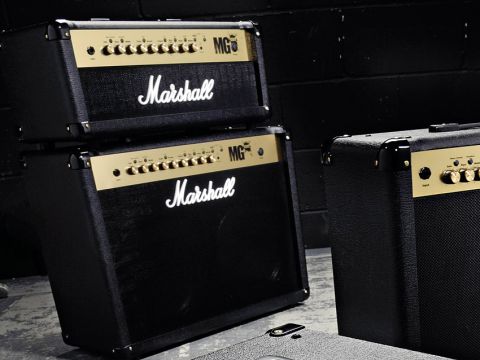 A portable and versatile head that'd be ideal for first-time giggers who can't quite stretch to a DSL or VM model.

Marshall's MG series is fundamentally important to the company. The entry level product, it sells in big numbers and is therefore many a budding player's first hands-on introduction to the brand, holding the potential to make or break a lifelong love affair with the most revered amp company of all time.

When we first reviewed the MGs back in September 2002 we were very impressed, and since then, despite the growth in digital modelling technology, the series has usually punched above its weight due to some innovative features such as Frequency Dependent Damping (FDD) and a contour control, not to mention the onboard effects.

2009 heralds the latest evolution: MG4, a totally new, completely redesigned range that sticks vehemently to an analogue design for the amp tones, meaning no digital recreations of amps of yore whatsoever.

The company says: "We live in an age of cloning where many amplifiers are attempting to copy each other. The new MG range produces the type of tone other amplifiers can only try to imitate."

Saucer of milk? Perhaps, but given that there's a Marshall simulation in every modelling amp ever made, you can see where the big M is coming from. Time to have a look at the class of 2009, then…

Hear the amp in action in the following demo:

Perhaps the most important, that's relevant across the board, is Marshall's Stompware technology, which enables you to program and store up to four sounds that can be composed from contrasting effects and different amp settings - including gain and EQ levels: four separate sounds, available instantly at your feet.

The key to the system is the Stompware footswitch that's included with all MG amps down to the MG50FX (and is available as an optional extra for use with the smaller amps too).

Setting and storing a sound is simple thanks to the provision of a store button and Stompware can also recall other specific settings: whether the FX loop is in or out, the damping selection and so on. Even the onboard tuner can be assigned to a patch: neat.

The footswitch's LED and status panel show you which effects and features you have for each of the four patches. While digital modelling amps offer many more presets than this, hands up who actually uses more than four core amp tones at a single gig anyway!

In that respect, each new MG of 50 watts or more is genuinely gig-ready in a band context from a practicality standpoint at the very least.

Each amp comes out of the box loaded with a quartet of factory settings, but changing them around or tailoring them to your specific requirements takes no more than a matter of minutes.

This may seem a very familiar configuration, but remember where in the market these amps are aimed and that there are no pesky amp, cab and mic models to choose, select, tailor and store. It truly is just a case of getting a sound you like and storing it.

The patches are kept in the amp's memory, rather than that of the footswitch, and it's also possible to set the amp to manual mode rather than preset, which will strip its functions down to basic channel switching.

Other features include a mono effects loop, a 3.5mm mini-jack line in intended for use with a CD, mp3 or other audio player, and a line out for headphones/direct hook ups.

The MG100HFX possesses a pair of speaker outs and even the power switch is new: it's a circular in/out affair rather than the more traditional illuminated rocker switch.

Chorus, phaser and flanger are chosen via a rotary control, while the delay and reverb have their own level pots. There's also a tap tempo function for use with the delay and each can be turned off completely with one of three switches.

Elsewhere the configuration is familiar from the more contemporary Marshall amps. As a solid-state, two-channel affair the three-way EQ is shared by the clean (green) and crunch (red) channels, with the latter also possessing an additional overdrive function that adds gain.

A single volume control is also shared, with an overall master the perfect way to ensure your volume onstage or in a rehearsal is where it needs to be without it being necessary to alter your carefully balanced settings.

One omission is that of the once lauded contour control, a feature that enabled you to effortlessly scoop a high-gain tone without it losing any punch or drive.

As recompense, a switchable damping option is provided that subtly alters the way in which the power section reacts to your playing. When switched out the amp is designed to feel akin to a classic Marshall, while flicking it on gives a more modern, compressed response.

We'll elaborate in the sounds section, and you can use the same button to switch between the aforementioned preset and manual modes.

Even a quick blast reveals plenty of headroom and versatility and, once you start getting deeper, you can't help but be impressed by the choices that are available.

Played clean, the tones are pleasing, though do have an element of squareness that no solid-state amp seems to be able to shake, compared with a quality valve amp at least.

They benefit hugely from the on-board effects, with the ability to marry both a delay and reverb with the modulation effects. Using a Strat's fourth position the reverb is deep and the delay, although not offering quite as lengthy a feedback as we'd have liked, is simple to control.

The chorus shimmers, the phaser throbs and the flanger… well… flanges. We find it hard to conceive of any player not enjoying the tones: we played for 20 minutes before remembering we had some evaluating to do.

Interestingly, Doug Aldrich did pretty much the same thing while demoing the amps at this January's NAMM show. He had to apologise for getting into it so much - no moans here Doug!

The sparkly high-end is transferred to both drive settings of the red channel which on the face of it may come across as too bright, but it's these frequencies that really help you get heard in a band mix: woolly just won't do when there are cymbals crashing all around you. In this mode we're in classic rock territory: some great Jimi-isms here, not least with the effects pumping.

Flicking the overdrive channel offers two further gain stages and it's here that the damping feature, a subtle one at the best of times, comes into its own. It really does alter the feel of the amp, and with the damping engaged, a higher gain setting and the middle reduced, there's a tone that'd be cool for modern metal styles.

The preamp isn't ultimately as dirty as you'd think, though perhaps we've become used to unrealistic levels of gain in some new amps - it's worth stating for the record that good live tones are invariably cleaner than you might think. One criticism is that the amp does suffer some background noise, even set clean.

We hooked the head up to a couple of different yet more robust cabs and found it sounded even better: maybe users should subsequently consider tracking down a second-hand 1960A?

As far as the versatility of the range goes, we're blown away. The provision of the elegantly simple Stompware footswitch (albeit not included as standard across the whole range) makes the new MG range serious contenders at the lower end of the market.

They're not the cheapest options out there when compared to their relevant peers, nor do they groan under the weight of amp, cab, and effects models. However, that classic white logo and gold livery still does something unexplainable to many guitarists and, if you're in the market for your first head and cab the MG100HFX is a strong contender.