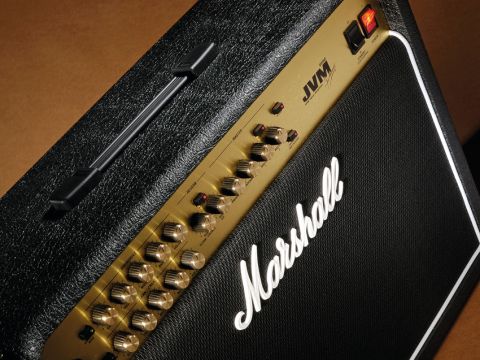 If you want a great all-round amp for a good price the JVM is going to be very, very hard to beat.

The JVM2 range sits quite neatly JVM4's MIDI-powered four-channel flexibility and the organic old-school minimalism of the KT66-powered Vintage Modern, and is likely to provide an ideal blend of features for most modern players.

Like all modern Marshalls, the JVM205 benefits from a tough ply cabinet and a hefty steel chassis, which combines with a pair of Celestion 12-inch drivers to provide a substantial package that's no lightweight. Yet it's still very portable, thanks to the relatively compact dimensions and a pair of side-mounted grab handles that make lifting and carrying so much easier.

The rear of the cabinet looks a little different because of the two perforated grilles, which provide room for the Celestion drivers to breathe and prevent damage to the output valves. We think the JVM205's dimensions are particularly pleasing to the eye - the extra depth of the control panel works well and helps create a blend of appealing visual proportions.

Inside the chassis, modern production dictates that nearly everything is PCB-mounted. Apart from the two Dagnall transformers, the majority of preamp, output stage and power supply components sit on one large high-quality PCB which is fixed to the chassis by sturdy bolted metal standoffs.

Double-sided and through-plated, this board contains all the high voltage stuff including the valve bases and most of the rear panel components, with a small daughter board attached to it for the JVM's digital reverb.

A separate single-sided PCB sat just behind the front panel handles the pots and switches, with other small boards for the speaker outlets and input jack. The PCB-mounted valve bases mean the preamp valves are quite deeply recessed and difficult to change quickly - also, the loudspeaker connections are made with spade connectors which have a tendency to work loose over time. These two minor niggles aside, the overall impression is of a well thought out design that will easily cope with pro-level use.

On the features front, the JVM has practically everything most guitar players could ask for, and then some. There are two channels which both offer three different voicings, accessed from the channel mode switches.

Both channels have the standard complement of gain, bass, mid, treble and master volume, as well as separate level controls for the JVM's digital reverb. There are also front panel controls for presence and resonance, which fine tune the power amp's high and low frequency response, and two master volume controls that can be set to different levels.

On the rear panel, the JVM205C also benefits from two effects loops (one series, the other parallel), a speaker emulated balanced line out, no less than five speaker jacks and MIDI. MIDI means that you can control any switch setting and send/receive program change commands, effectively turning the JVM into a highly versatile six-channel tone machine.

Thankfully, the JVM205C is among the best-sounding new Marshalls we've played in years. The clean/crunch channel can go from pristine sparkling clarity to a pretty aggressive JCM800-inspired crunch, while the lead channel's three modes take over from there and add progressively more gain, taking you from archetypal classic blues/rock to searing, mega-gained solos and practically everything in between.

It's not just the range of tone and gain that impresses us here it's also the quality. You could easily cut an entire album with the lead channel's green mode alone - it's that good. And the other modes are more or less up to the same standard.

It's only at the two extremes where things can be a little less than totally inspiring - high gain on the lead channel's red mode tends to turn mushy and lose dynamic response, but this applies to practically all high-gain amplifiers.

For ultra-clean fat jazz or country tones the JVM's response is a little too punchy - but hey, this is a Marshall. It's not all by-the-book stuff either - the JVM packs two different types of loudspeaker (a G12 Vintage and a G12 Heritage) which are wired in series, not parallel. This adds a complex, looser feel to the JVM's response - it's a clever trick that's often used on expensive boutique amps.

The switching and MIDI functions work seamlessly and are simple to use - a sure sign that an awful lot of work went into getting them right. Basically, all front panel switches remember their last setting, so if you select say, orange mode with reverb for the clean/crunch channel, that's what you'll get when you switch back to it from the lead channel.

It's worth mentioning that MIDI control is limited to the front panel switch settings, not the position of the rotary controls. We think that's actually a good thing. Full MIDI control is often a pain to set up and self-defeating in use - you end up playing with presets not music.

The reverb is rewarding to use, it's a warm hall type which sounds natural and decays smoothly with no digital clatter.

All of the JVM205C's features make sense and, even though there are two less channels than you'd get in a JVM4, it's still a ferociously versatile tone machine that doesn't force you to understand a lot of technical stuff in order to use it.

That and the sheer quality of the sounds it produces are two very good reasons for getting one. And if that isn't enough, the price should make up your mind. In a market sector with more than its fair share of indifferent, run-of-the-mill black boxes, Marshall has just unleashed a powerhouse of tone that could easily compete with boutique designs costing two or even three times as much.

If Marshall was trying to create the ultimate sub-£1000 guitar amp, it can give itself a pat on the back, because this one provides pretty much everything you could possibly ask for. Ignore it at your peril.