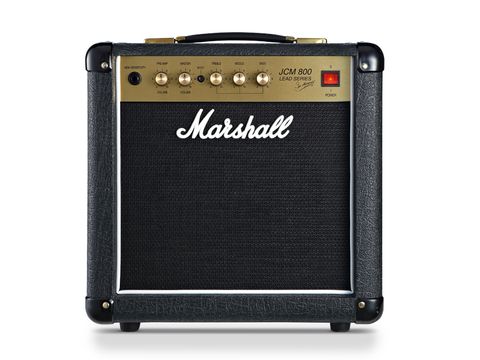 If you can afford it, take the chance to grab a little slice of rock history.

These one-watt lovelies reference one of the most influential and well-known guitar amplifiers on the planet - recreating those sounds with such a small and substantially different power stage must have been a real challenge.

The early '80s saw a sonic milestone, with Marshall's JCM800 series. While the first master-volume amps dated back to around 1975, in the following four or five years Marshall introduced the cosmetic changes formalised with the full-width control panel of the JCM800 in 1981.

"JCM amps have an aggressive mid-range with a very fast response that almost sounds as though notes are being propelled out of the loudspeakers with gunpowder."

That year also marked the end of the Rose-Morris distribution arrangement, which had effectively prevented Marshall from selling its products overseas for 15 years. While early JCM800s were essentially repackaged Master Volume models, a year or so later the range expanded to include versions with footswitchable channels, effects loops and spring reverb.

The early clean channels were not the best, it has to be said; however, the JCM800's devastating lead channel was an instant worldwide hit with the heavy rock and metal bands of that era, powering the likes of Saxon, Def Leppard, Iron Maiden and many others to massive international success.

The amplifiers use tough, open-ended steel trays for the chassis, with most of the electronics on a large and very high-quality printed circuit board. The JCM amps have three valves - at the output stage, a single ECC82. The valves are recessed into the steel chassis, making replacement a bit fiddly, although it's not likely to be a frequent occurrence.

JCM amps feature separate preamp gain and master volume knobs with bass, mid and treble tone controls. There's a gain boost on the front panel and a power reduction switch on the rear.

The combo is loaded with a single 10-inch Celestion driver, and the unique 50th Anniversary plaque is mounted on the rear. Like all modern Marshall products, the build quality is superb.

Ultra-clean soldering and wiring connect top-quality components, including many custom parts. They may not end up going on tour and being worked 24/7, but if you wanted to use them for mission-critical purposes they're as reliable as anything the firm produces.

JCM amps have a more aggressive mid-range than a JMP, with a very fast response that almost sounds as though notes are being propelled out of the loudspeakers with gunpowder; they're at their best when turned up loud, which slightly compresses the dynamic range and smoothes out the distortion a little.

The JCM1 nicely replicates the JCM800's ferocious sound at less threatening volume levels, with a boost function to get you closer to the flat out, everything-on-11 sound of a 2203 at full throttle. Overall, the results are nothing short of stunning and we're amazed at just how well it references its full-sized ancestors.