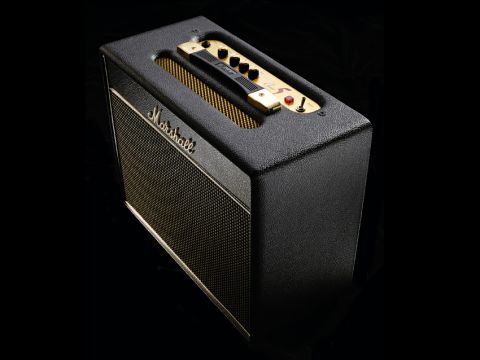 You know the old adage: you wait for one cost-effective low-powered valve amp, then 58 come along at once! Or so it seems on the congested streets of Toneville, fuelled by our desire for better sounds, but less volume. So…

Welcome Marshall's Class 5, a five-watt, class A, all-valve combo that sings simplicity, tone and portability as its three-part battle song. It's powered by a brace of ECC83s in the preamp stage and a lone EL84 for power, making it good - according to Marshall - for practice, rehearsals and small or mic'd gigs. No messin' - just plug in, turn up, wig out: exactly as it should be.

Visually the Class 5 pays homage to Marshall's revered mid-sixties 'Bluesbreaker' and 18-watt combos, with its black vinyl, 'Plexi'-style top-mounted control panel and short front insert. The piping here is gold instead of white and we have and salt and pepper grille cloth instead of the Bluesbreaker's famous striped type.

We think it looks the business; serious enough so people won't laugh at you, yet still small enough to ride shotgun in your four-wheeled bandwagon of choice.

The Class 5 is made here in the UK, and while it's not really Guitarist policy to politicise, the benefits of a potentially high-production-numbers amp being made in Bletchley are obvious in the current economic conditions. The trade-off for maintaining UK jobs is price, of course, yet with a quality birch-ply cabinet and generally high build quality throughout, Marshall has done well to bring the Class 5 in as low as this.

£330 for five watts, you might ask? Don't make the mistake of comparing this with a cheap, transistor combo, it's as much a serious tone machine in intention as many amplifiers five times its power and price.

The amp chassis is a fairly thin, bent aluminium box, but is bolted to the back and top panels so that nothing can flex or move. There's a single, no-frills PCB that houses most of the amp's components, including the valve bases, while the transformers, IEC mains connector, headphones and speaker outs are chassis-mounted. Everything is screwed very securely with the main board fitted on metal standoffs so that it all feels pretty secure.

The cabinet is ported slightly at the rear, which serves to keep the bottom-end tight and full, but releases enough air to stop the cab from sounding overly directional or boxy, which can be an issue with little amps.

To change valves you need to remove the whole back panel, which takes a few minutes. While we're round there, it's worth noting the headphone socket, which mutes the amp's output for silent practice - and the 16-ohm extension cab outlet, so you can hook it up to a 4 x 12 if you so desire.

Hear the Class 5 put through its paces with a Strat and a Les Paul in the following clip:

There's just one input option and one volume knob on the Class 5, so you won't spend too much time worrying about how best to set it up. The time-honoured approach is to whack everything up to boiling point and use the guitar's volume pot to regulate back from there.

So, armed with a vintage-style Stratocaster and with everything on the amp set to three o'clock we get to work. The Class 5 is rudely loud - enough to upset your neighbours to legal action levels and then some.

That means it has enough grunt for sensible rehearsals and, if you don't have a cacophonous drummer, it can deal with unmic'd small gigs, so long as you don't need huge, loud clean sounds.

The overall tonality is very much 'Plexi'/Bluesbreaker, with hints of that punch-in-the-chest mid-range, but softened and rounded slightly because of the lower power and, doubtless, the EL84 power valve. With the Strat's volume up full, the overdrive feels very sixties to this reviewer - think Jimi Hendrix and 1960s Beck as the general ballpark.

Switch to humbuckers on a Gibson-style guitar and things start overdriving much earlier. Guitar volume up full, it'll sing for solos and provide good harmonic feedback. This is Bluesbreakers-era Clapton all over - fat and compressy - through to a good AC/DC-style crunch.

We'll reiterate again that this is a very loud little amp. The tone controls aren't hugely powerful in the way that classic Marshalls never are, but they're interactive. Set the bass and treble high, and regulate the main part of the voice with the middle pot for best results.

With the volume set below half you have more headroom before the amp is distorting too hard, so you can add whatever stompboxes you like for different textures of boosty filthage. With various combinations of a Keeley-modded Tube Screamer, Fulltone Full-Drive II and a Crowther Hot Cake, we were spanning the gamut of Southern rock and blues sounds from Billy Gibbons to David Grissom and beyond.

The headphones output is useful for silent practice, though you don't want to be cranking the Class 5 through your cans because it's extremely loud, and it can start sounding very raspy through the headphones at higher levels.

Infinitely more rewarding is the extension speaker output - hooked up to a 4 x 12, you benefit from all that extra moving air, making the Class 5 sound gigantic.

Twenty years ago, the Class 5 may well have been laughed out of the music store - back then a five-watt amp had no right to sound good. Times have changed radically though, in that many players are willing to drop their bravado guard and finally admit that a little amp cranked up is often much more satisfying than a big one tethered down to tick over.

The trade-off for all of this singing tone at lower volumes is, of course, the sacrificing of much clean headroom at anything other than low levels, so anyone who's looking for a gig-level clean picker should definitely look elsewhere.

If you're after a simple valve tone monster for crunch and classic drive sounds, however, then you absolutely have to try this amp. Its combination of satisfying tones, usable volume, portability and, of course, price all add up to a winning package. Destined to be extremely popular, and deservedly so.